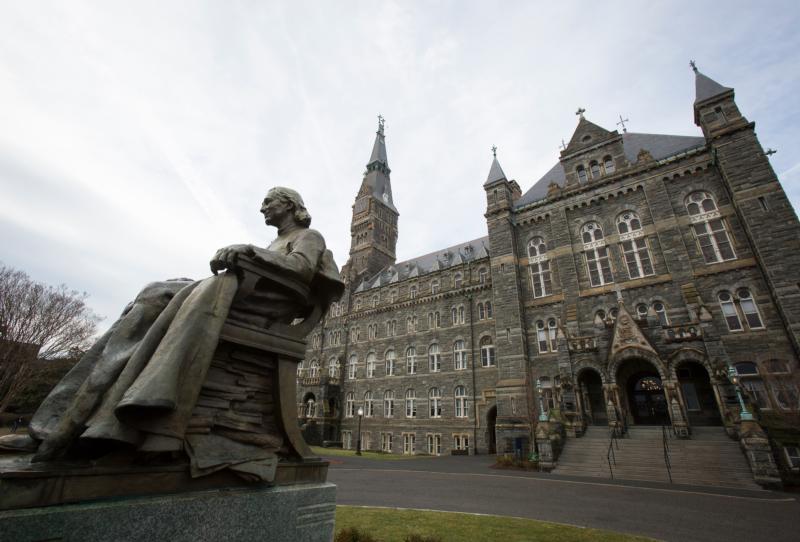 UPDATED – WASHINGTON (CNS) — Officials at Georgetown University were “deeply troubled” to learn that the school’s former tennis coach, Gordon Ernst, is alleged to be part of a widespread college admissions scandal.

He is one of at least nine athletic coaches and 33 parents, including celebrity moms, charged March 12 in the scandal that involved bribing college coaches and others to secure coveted spots at selected colleges and universities around the country.

Ernst, head coach for the men’s and women’s tennis teams at Georgetown from 2006 to 2017, resigned last year from the school and is currently the tennis coach at the University of Rhode Island. He was charged with conspiracy to commit racketeering March 12 and accused of accepting $2.7 million in bribes. He was released on a $200,000 bond later that day. Ernst, who resides in Maryland, had to surrender his passport and can only travel within the state.

A letter sent the same day to members of the Georgetown University community by school officials said: “Earlier today, we were deeply troubled to learn that former tennis coach, Gordon Ernst, is alleged to have committed criminal acts against the university that constitute an unprecedented breach of trust.”

It pointed out that Ernst, along with more than 40 others, including coaches from several universities, were all allegedly part of a conspiracy with the college preparation company, The Key Worldwide, which helped facilitate cheating on college entrance exams and bribed coaches to propose students as athletic recruits. Its CEO, William Singer, was paid about $25 million from 2011 to 2018 by parents who wanted their kids to get into elite schools.

“The United States Attorney’s Office for the District of Massachusetts has identified Georgetown as a victim in the criminal case,” the Georgetown letter said.

The investigation showed that Ernst had violated university rules concerning admissions and he left the school the following year. The school officials said the university was not aware of Ernst’s alleged criminal activity or acceptance of bribes until it was later contacted by the U.S. Attorney’s Office.

“We have no indication that any other Georgetown employees were involved,” the letter said. It also noted that the school established a new policy last year to strengthen the recruitment and admissions process for potential student athletes. The school’s Department of Athletics and Office of Undergraduate Admissions also currently performs audits to make sure recruited student-athletes are on the roster of the sport for which they were recruited.

Another Catholic University, the University of San Diego, was also named by federal prosecutors as a victim in the admissions scam. According to the San Diego Union Tribune, a former coach at the university allegedly took bribes to help get students enrolled at the university. The coach’s name has not been announced and the newspaper said it is not clear if charges are pending.

A March 12 letter to the university community from the school’s president, James Harris, III, acknowledged the investigation was taking place and that the school was cooperating.

“We have been cooperating with the government’s investigation and we have no reason to believe that any members of our admissions team, our administration or staff or our current coaching staff were aware of or involved in the alleged wrongdoing,” he wrote. “We believe the federal government agrees with this assessment,” he added.

He said the university was conducting an internal review and would take appropriate action if they uncover any violations of school policies.

Harris said the university’s admissions and recruiting policies “are grounded in a commitment to integrity and ethical conduct” and the government’s current investigation “reflects conduct that is neither condoned nor tolerated” at the university.

In announcing the charges in this case March 12 in Boston, U.S. Attorney Andrew Lelling called the parents involved “a catalog of wealth and privilege.”

Coverage of the announcement by The Associated Press said no students were charged and in many of these cases they didn’t even know what was going on.

“For every student admitted through fraud, an honest and genuinely talented student was rejected,” Lelling said.

Patricia McGuire, president of Trinity Washington University, expressed her thoughts about the admission scandal on Twitter March 12 and 13: “Parents may have some inchoate notion of wanting their kids to do well,” but they also want “bragging rights about where their kids are in school.” The scandal is as “much about the parents’ status consciousness as it is about wanting the children to do well,” she added.

She also said that students and parents need to know the best college is “where the student will learn well with dedicated teachers and a campus environment that supports the student’s interests and needs. For some students that might be a big-name school, but for many it’s a smaller place.”

NEXT: Withholding donations to church fails to account for progress on abuse