In Utah, Catholics, Mormons have long had ‘positive, cordial relationship’ 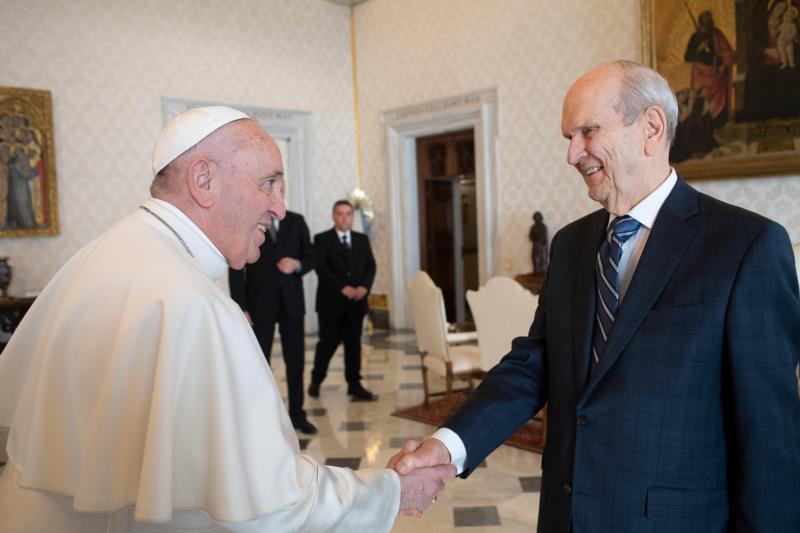 SALT LAKE CITY (CNS) — The March 3 meeting at the Vatican between Pope Francis and Russell M. Nelson, president of the Church of Jesus Christ of Latter-day Saints, drew great interest from members of both faiths and was covered extensively in the media in Utah.

The Church of Jesus Christ of Latter-day Saints, widely known as the Mormon Church, has its headquarters in Utah.

This historic meeting, the first between the leaders of the two churches, came about while Nelson and other leaders of his faith were in Rome to dedicate a church temple, the first in Italy. Church temples are where the sacred ordinances, or sacred rites and ceremonies, of the faith are conducted.

The temple was built as a response to divine revelation, to give the church’s nearly 27,000 members in Italy access to those ordinances and because Rome has historically been “the heart and center of the Christian world,” said John Taylor, director of interfaith relations for the Church of Jesus Christ of Latter-day Saints.

Vatican leaders, in particular Cardinal Jean-Louis Tauran, who was president of the Pontifical Council for Interreligious Dialogue until his death last year, have been very supportive of his church’s efforts to build the temple in Rome, Taylor told the Intermountain Catholic, newspaper of the Diocese of Salt Lake City.

While historically the two churches have interacted positively, some see the meeting as the beginning of a new chapter in their relationship.

Schmalz has written and spoken extensively about Mormon-Catholic dialogue and is the only Catholic on the editorial board of Dialogue: A Journal of Mormon Thought, an independent quarterly journal.

Utah became home to the Church of Jesus Christ of Latter-day Saints in 1847 as its members settled in the state in hopes of finding a place where they could practice their faith without persecution. (The tenets of the religion were unpopular in the Eastern states where the church first organized.)

While the first Mass was celebrated in Utah in 1776 by members of the Dominguez-Escalante party, who were seeking an overland route from present-day New Mexico to California, the Catholic Church formally came to Utah with the creation of the Apostolic Vicariate of Utah in 1886; the statewide Diocese of Salt Lake City was established in 1891.

In time, both churches grew and flourished side by side on this desert frontier, but while each church professes a deep belief in the person of Jesus Christ as the savior of mankind, distinctly different doctrines and practices have historically kept the faithful separate.

Nevertheless, over the years, the leadership of the two churches met often, but it was always behind closed doors, according to Msgr. Colin M. Bircumshaw, vicar general of the diocese.

“The differences were in the pews,” he said. “We’ve had a positive and cordial relationship for many years. We have mutually recognized theological differences, but we don’t let them deter us from working together and respecting one another. We’ve especially worked closely together in common areas of social justice and charitable projects.”

Locally, the Church of Jesus Christ of Latter-day Saints has proven to be a strong partner with Catholic Community Services of Utah, the local arm of Catholic Charities USA.

“Not only do they support us with in-kind and monetary donations, but also with volunteers,” said Bradford R. Drake, executive director of Catholic Community Services.

“Their manpower is invaluable as each of our programs rely on thousands of volunteers each year to meet the needs of those we serve,” he said, adding, “we consider ourselves very fortunate to work with the Church of Jesus Christ of Latter-day Saints, whose focus is very similar to ours in following Christ’s example of serving those most in need.”

On a national level, since the 1980s, LDS Charities, the church’s humanitarian arm, has had on ongoing relationship with Catholic Relief Services.

It began when Bishop William K. Weigand, the seventh bishop of Salt Lake City (1980 to early 1994), facilitated a partnership between LDS Charities and CRS to provide aid to Poland during the early days of Solidarity, the people’s labor movement in that country. Since that time, CRS and LDS Charities have partnered in hundreds of humanitarian and development projects across the world.

While the leadership of both churches has been actively engaged together in humanitarian efforts for many years, for much of their shared history in Utah the ordinary members of the churches rarely interacted except in the workforce. In recent years that has changed.

For example, parishes and wards throughout the state often assist each other on food drives and other charitable efforts. Also, as attacks on organized religion and traditional values have mounted, common core values have led to greater interaction and dialogue between local faith congregations, including the two churches.

Leaders of the two churches have continued to meet often to address areas of mutual concern. One issue that Taylor said comes up at just about every meeting in recent years is how to engage young people who are drifting away from their parents’ faith.

Taylor said they are learning together that while these young people often describe themselves as religiously unaffiliated or “none” on surveys, they are very concerned about causes.

The charitable work of both churches is the perfect vehicle to draw those young people back into their faith communities, Taylor said. “It is amazing to me to see that when we organize an activity or event along those lines there is an incredibly strong response that comes from that segment.”

As both churches address this and other concerns, “I have no question that the commonalities between the two faiths can overcome the differences that separate us,” he said.

Petersen writes for the Intermountain Catholic, newspaper of the Diocese of Salt Lake City.