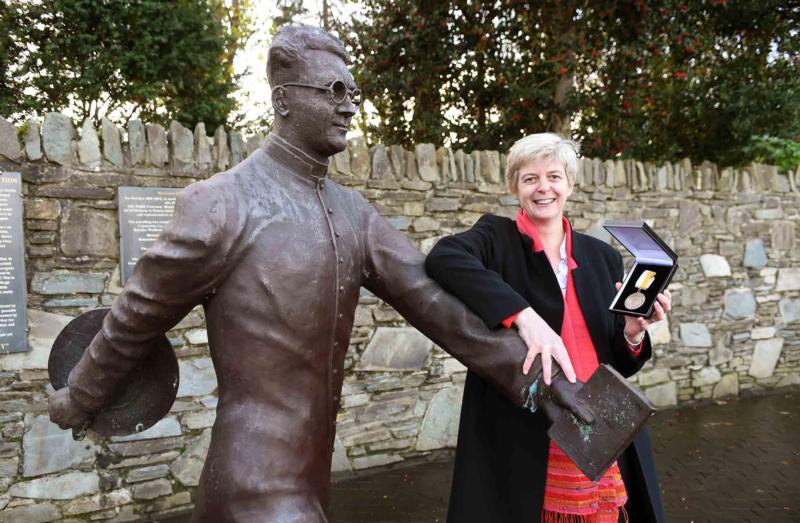 Sister Orla Treacy of the Irish Loreto Sisters is seen in this undated photo. On March 7, she was presented with an International Women of Courage Award by U.S. Secretary of State Mike Pompeo for her work in Rumbek, South Sudan. (CNS photo/Don MacMonagle, courtesy Matt Moran)

WASHINGTON (CNS) — Spreading the Gospel in a place where hate or love are doled out based on tribal membership is a hard task but, since 2008, Sister Orla Treacy of the Irish Loreto Sisters has risen to the occasion.

On March 7, the day before International Women’s Day, she was recognized again for her efforts.

Sister Treacy was presented with an International Women of Courage Award by U.S. Secretary of State Mike Pompeo for her work in Rumbek, South Sudan. The State Department citation for her award said she “continues to work in faith, striving for a world in which girls are not forced into marriage, are allowed to complete their education, and can pursue their dreams.”

The ceremony, in its 12th year, recognizes women from countries across the world who work for peace and justice in places where it is most needed. Women are nominated for the honor by U.S. ambassadors, and this year included awardees from Tanzania, Sri Lanka, Peru, Montenegro, Jordan, Egypt, Djibouti, Myanmar and Bangladesh.

Sister Treacy was nominated by the U.S. ambassador to the Holy See for her work alongside other Loreto Sisters, who now run an expanding and comprehensive mission in a region that finds itself at the painful intersection of intense tribal conflict and seemingly insurmountable gender inequality.

The Loreto Rumbek Mission is best known for its secondary boarding school for girls, which Pompeo referred to as “a beacon of hope for girls who might otherwise be denied education and forced to enter early marriages.” The mission began with only the school, but has since evolved to include a co-educational primary school and a clinic for women and children.

Sister Treacy was the principal at the school’s inception in 2008 and, since then, has worked to make it a counterpoint to the hatred and hardship that surround it. She told Catholic News Service in 2017 that “inside the school the girls live in peace and harmony,” teaching other girls their own tribal dances despite the internecine fighting going on outside.

Another struggle the school faces is that women are often bargaining chips for the economic security of their families, crushing hopes they may have to pursue careers. In 2017, Martha Athiei, then-head girl of the school, described to CNS that “whenever you go home for holiday, your family members ask when you’re going to be finished with school. …They want cows.”

Athiei was referring to the lucrative bride prices — often paid out in livestock — families can receive if their girls get married.

In 2017, Sister Treacy was awarded the Hugh O’Flaherty International Humanitarian Award. That honor, which is given to remember Father Hugh O’Flaherty’s rescue of Jews and soldiers during World War II, awarded Sister Treacy $1,158, which she pledged to put toward improving services at the mission’s health clinic.