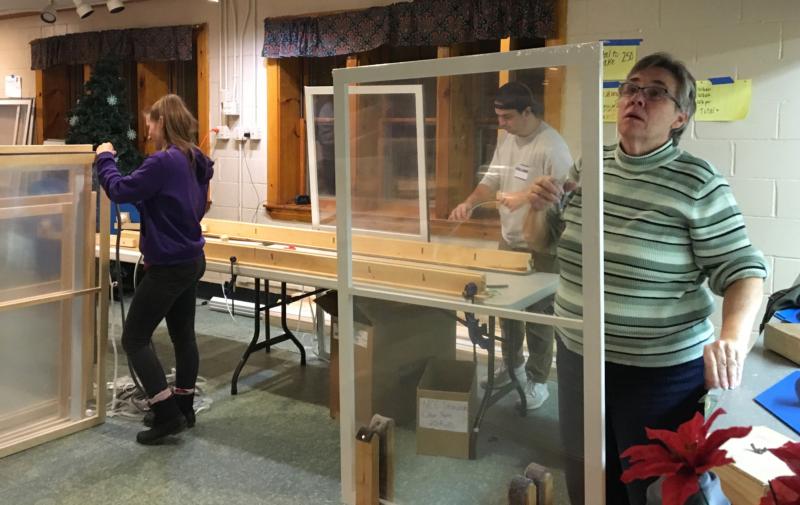 WASHINGTON (CNS) — The bitterly cold Maine winter wasn’t quite so brutal this season for Lindsay Jaques and his family.

The Jaqueses of Sebago were among 19 families who received energy-saving window inserts as part of a project that brought together St. Joseph’s College in Standish, Maine’s only Catholic college, AmeriCorps volunteers and a local church.

Jaques told Catholic News Service that he has noticed that the tank of heating oil at his home has lasted longer this winter, helping him, his wife and their 5-year-old daughter better afford a few other necessities and pay off college loans.

“We can feel an actual difference in warmth. When we bought our house, we were only able to afford to replace a certain amount of single-pane windows, so we focused on the bigger rooms (living room, kitchen). In our bedroom in the winter you could almost feel a breeze and the floor was always freezing,” Jaques wrote in an email.

“With the inserts there is no cold air coming through at all and the floor isn’t as cold,” explained Jaques, who works as a lead infant teacher at a day care center.

The insulating inserts are custom-made, sized to the windows of each individual residence. They consist of a pine frame wrapped in two layers of tightly sealed, clear polyolefin film and a compressible foam gasket that allows for each to easily slide into place.

The program is part of a growing outreach by St. Joseph’s College that goes beyond the campus. The school has been recognized by “The Princeton Review’s Guide to 399 Green Colleges” for its campus-wide sustainability initiatives.

When the opportunity arose in 2017 to widen its concern about the environment to the wider community, college officials jumped on the effort, said Kimberly Post, co-director of the college’s Center for Sustainable Communities.

Post said volunteers built more than 170 inserts over four days in early December in space provided by the nearby Raymond Village Community Church.

The low-income families who received the inserts were spread across towns near the Sisters of Mercy-sponsored college on the shores of picturesque Sebago Lake.

The program is conducted under AmeriCorps through the Maine Partnership for Environmental Stewardship. Heather Craig is the coordinator. The program is one of several under the Maine Campus Compact, which brings together universities and college communities for social justice and community engagement work.

“It’s worked really well,” Craig said of the two-year-old program in a phone interview from her office at the college. “It’s a really good outreach opportunity because people actually get something out of it.”

The compact has worked with the originator of the window inserts, WindowDressers in Rockland, Maine. The nonprofit organization started in 2010 and brings together volunteers, including recipients, to build the inserts at 23 workshops throughout the state. Low-income families are not the only beneficiaries. The company also sells inserts to anyone looking to reduce heating costs.

Post said the college continues to look for ways to improve environmental sustainability, reduce waste and increase knowledge among the entire campus, which is located 18 miles northwest of Portland.

“When (sustainability) is really part of the strategic plan of the college and fits so directly with our mission and core values, sustainability is a justice issue and really is about what this college stands for,” Post said.

NEXT: Border bishops speak against asylum policy, perception of immigrants