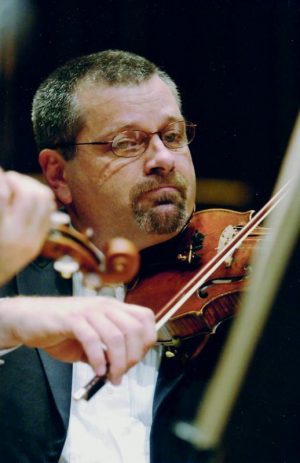 A little more than a week later, he began ministry as director of catechesis for St. John the Evangelist Parish in Indianapolis. Six months later, he was ordained a deacon for the Indianapolis Archdiocese and has continued to serve at St. John since then.

Although he laid down his violin to minister in the church full time, Deacon Bartolowits still makes beautiful music, a symphony of faith.

For him, music and faith are deeply intertwined. Each has sharpened his appreciation of the other.

“I don’t know how someone who performs classical music cannot experience spirituality,” Deacon Bartolowits said. “I can’t see how you can separate that.”

For him, entering into the great works of classical music is like reading sacred Scripture.

“When you read a passage of Scripture, it speaks to you differently each time you hear it,” Deacon Bartolowits told The Criterion, newspaper of the Indianapolis Archdiocese. “It’s created for that.

“And it’s the same with classical music. It’s not a one-time experience. There’s so much depth in the technique of writing a piece so that it has that depth that can speak to you in multiple ways, at multiple times over the course of a lifetime. There’s a parallel there.”

Deacon Bartolwits’ love affair with music and his faith grew in different ways at different times.

He gained a passion for music while in high school in Pittsburgh. He later studied violin performance as an undergraduate student at Pittsburgh’s Carnegie Mellon University.

After graduating in 1981, he was hired by the Indianapolis Symphony Orchestra and stayed there until he retired.

“You’re putting more of who you are as a human being into that music,” Deacon Bartolowits said. “It’s not just a way to make money or provide for your family. There’s another level that goes into being a musician. Your soul is involved somehow.”

Although raised as a Catholic and never one to miss Sunday Mass, he said that until about 20 years ago, he had only a “rudimentary faith.”

When his children became young adults and began to question the faith, he began to delve more deeply into it. 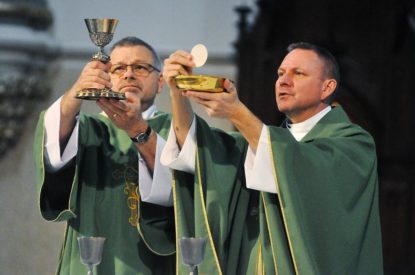 A retreat at St. Meinrad Archabbey in St. Meinrad, Indiana, eventually led Deacon Bartolowits to participate in the monastery’s oblate program, a way for lay Catholics to practice Benedictine spirituality.

He later enrolled as a lay student at St. Meinrad Seminary and School of Theology in St. Meinrad, taking some courses there and others online.

During this time, praying about God’s will for him took on greater importance. “(I) was always discerning, ‘What is it that you’re calling me to do?’ ”

This ultimately led to him considering that God might be calling him to be a deacon.

The archdiocese’s deacon formation program, though, would be challenging for him. It meets one weekend per month most months of the year. And it’s on weekends that the Indianapolis Symphony Orchestra plays most of its concerts.

After speaking with the symphony’s leadership, he found them amenable to him taking one weekend off per month.

“I said, ‘Well, God, that piece of the puzzle’s been solved,'” Deacon Bartolowits recalled.

During his year of formal discernment of the diaconate and four years of formation, he thought that, were he ordained, he would continue to be a violinist in the symphony, much like other deacons continue in their careers after ordination.

However, during his final year of formation, Deacon Bartolowits and his wife, Leslie, began considering his retirement from the orchestra. He found himself drawn more to ministry and had already accomplished most of what he wanted to do as a musician.

“We prayed about it,” he recalled. “We took some time and sought some counsel. Although I wasn’t prepared for that, over the years I had always asked God to let me be open to his will.”

Not long afterward, Father Rick Nagel, pastor of St. John, where Bartolowits was a parishioner, invited him to consider becoming the faith community’s director of catechesis.

“It was God just stepping in and giving him the answer that he needed,” Leslie said. “It was really amazing. It was an awesome decision. It was God saying, ‘This is the right thing for you to do.'”

In his ministry, Deacon Bartolowits oversees catechetical programs for parishioners of all ages, its Rite of Christian Initiation and jail ministry.

He is currently helping 42 people, from ages 18 to 67, prepare to be received into full communion with the church at the Easter Vigil.

“I am overwhelmed by the stories of people that are coming into the faith and searching for God,” Deacon Bartolowits said.

He sees guiding each of these people, with their own unique journeys of faith, into a broader community of believers as like leading dozens of individual musicians with their own interpretations of a musical piece to unite in making beautiful music together.

“One of the goals of formation is to help them understand that participating and journeying with a community is what it means to be Catholic,” said Deacon Bartolowits.

He also believes that practicing one’s faith in a community enables “all of us to use our individual voices to engage in a harmony that allows us to see that Christ is truly present in an individual when that person lives within the reference of a living community.”

“As much as Deacon Dave is gifted as a musician, he is equally gifted as a minister in the church,” Father Nagel said. “Like most people, God has the plan and the years before formal ministry were helpful for Deacon Dave to understand that all things good require discipline, rhythm and commitment. His time in the orchestra certainly challenged him to these virtues, which are now being used in ministry.”

NEXT: Utah teacher apologizes for telling boy to wash off cross of ashes