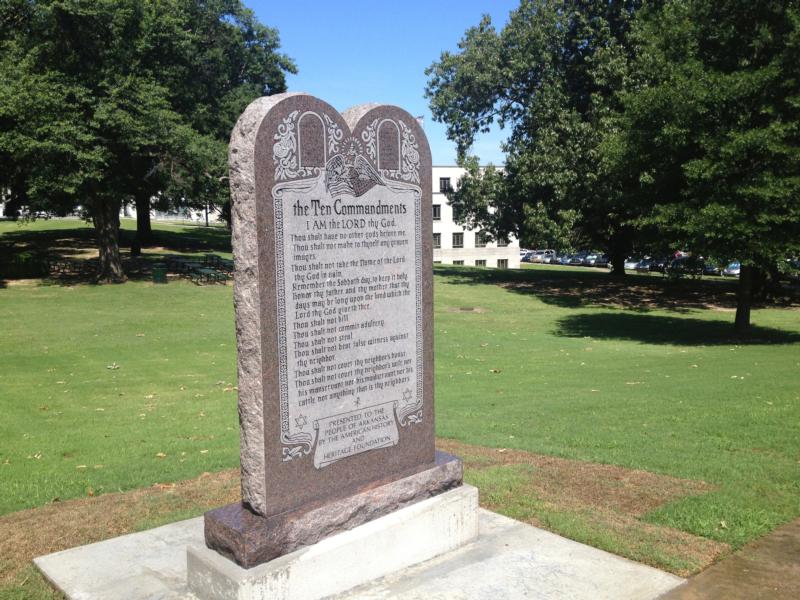 A statue of the Ten Commandments is seen June 27, 2017, after it was installed on the grounds of the state Capitol in Little Rock, Ark. Legal scholars are wondering how the U.S. Supreme Court will rule on future cases involving religious symbols. (CNS photo/Steve Barnes, Reuters) S

WASHINGTON (CNS) — Just before the Supreme Court heard oral arguments about Maryland’s Peace Cross — which pays tribute to fallen World War I soldiers — a few people on the steps of the court were confident the weathered monument would get to stay in place.

Two American Legion members — both from Maryland and familiar with the Latin Cross landmark in the middle of a major intersection in suburban Washington — said they viewed the 93-year-old monument simply for what it is, a war memorial, and not as something religious. They also believed the court would rule in its favor based on previous rulings.

But previous rulings alone might not necessarily pave a way forward because by the justices’ own admission, the court has not always been clear on its stance on religion in public life.

Just last year, Justice Clarence Thomas, who dissented from the court’s refusal to take up a case about prayers opening legislative sessions in North Carolina, said the “court’s Establishment Clause jurisprudence is in disarray.”

And even in oral arguments Feb. 27 about the World War I memorial cross, the court’s go-to First Amendment measure in these cases, the often-cited “Lemon test,” was described not once, but twice as a “dog’s breakfast” by Justice Neil Gorsuch.

The Lemon test, often the final word on church-state decisions, is based on the 1971 Supreme Court case Lemon v. Kurtzman where the court ruled that Rhode Island and Pennsylvania could not subsidize Catholic school teachers in purchasing textbooks and school supplies.

The “test” is three parts: Laws must have a legitimate secular purpose, they should not advance or inhibit religion, and they should not cause an excessive entanglement of government and religion.

Gorsuch is hardly the first justice to find fault with Lemon’s guidelines. In a 1993 case about a church prevented from using a public-school building after hours to show religious films, Justice Antonin Scalia compared the court’s standard to “some ghoul in a late-night horror movie that repeatedly sits up in its grave and shuffles abroad, after being repeatedly killed and buried, Lemon stalks our Establishment Clause jurisprudence once again, frightening the little children and school attorneys.”

And in a 1989 case about the constitutionality of two holiday displays on public property in Pittsburgh, Justice Anthony Kennedy called the Lemon test “flawed in its fundamentals and unworkable in practice.”

In 1980, the Supreme Court addressed the constitutionality of public religious displays saying the Kentucky law requiring the public schools to display the Ten Commandments in classrooms was unconstitutional.

And in 1984, the court had its first case about a Christmas Nativity scene in Rhode Island that was allowed in a public park since it was displayed with secular holiday symbols. Five years later, a Pittsburgh manger scene on public grounds did not get the court’s stamp of approval because it was displayed on its own and the court said it amounted to government endorsement of religion. A second Pittsburgh display with a menorah was allowed because it was part of a scene including secular symbols.

Jump ahead to 2005 to the Supreme Court’s mixed messages on Ten Commandments’ displays. In two rulings on the same day, the court called this display in two Kentucky courthouses unconstitutional but ruled that a similar display outside the Texas Capitol passed muster because it had been there for more than 40 years and a “reasonable observer” would not likely view the display as predominantly religious.

A 2007 look at religious displays and the courts by the Pew Forum on Religion and Public Life said the court’s decisions in these cases have “relied heavily on a close examination of the particular history and context of each display and has largely sidestepped setting clear rules that would assist lower courts in deciding future cases.”

And that may well be the precedent it follows in the Peace Cross case since the justices focused primarily on the monument itself not on overall sweeping statements about religious symbols even though some legal scholars had expressed hope that this case would chart a clear path forward.

Before the oral arguments, Richard Garnett, law professor at the University of Notre Dame, said the case “presents a new opportunity for the justices to clarify the law regarding public religious symbols” noting that it is the first “clean religious-symbols case in almost 15 years and, during that time, six new justices have joined the court.”

John Vile, dean of the University Honors College at Middle Tennessee State University and co-editor of the Encyclopedia of the First Amendment, told Catholic News Service Feb. 28 that one factor which could lead the court to let the memorial stay is that “it has been in place for so long, without apparently leading to a church-state establishment.”

This echoes an idea Justice Stephen Breyer voiced during oral arguments: “What about saying past is past, but no more?” — which essentially lets old monuments remain but doesn’t allow new ones with religious symbols on public property.

Vile also noted that military graveyards now offer a variety of symbols for Jews, Muslims, Christians and even nonbelievers, “which makes it difficult to portray this as part of an ongoing effort to prefer one religion over another.”

He said one argument in the memorial’s favor is that its primary purpose is not to advance religion but to honor the dead. He also said it is currently common to commemorate victims of mass shootings with individual crosses without inquiring if victims were Christians or not.

Vile had one possible compromise. He said in an email that even if the Supreme Court ruled that the memorial violated the Establishment Clause, he thought the “government could probably give or sell the memorial to a private group that agreed to provide upkeep.”

NEXT: Temporary Protected Status extended for nationals from four countries