SOUTH BEND, Ind. (CNS) — Holy Cross Father John I. Jenkins, president of the University of Notre Dame, said he has heard from many in the campus community that the “deeply disturbing” stories of clergy sexual abuse have “disheartened and challenged their faith.” 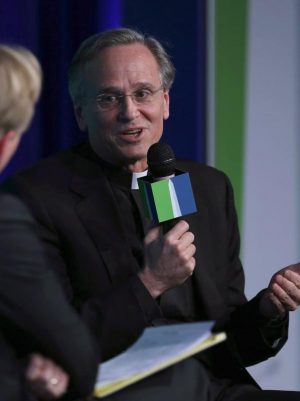 Holy Cross John I. Jenkins, president of the University of Notre Dame in South Bend, Ind., is seen in Washington in this 2013 file photo. (CNS photo/Gary Cameron, Reuters)

He noted the reports over the last several months of clergy who were “unfaithful to their vows and who used the trust afforded by their position to sexually exploit those in their charge.” In addition, Father Jenkins said, are bishops “who failed in their responsibilities to bring offenders to justice and protect the most vulnerable,” and, “most wrenching,” are the stories of victims “whose lives were so damaged by abuse.”

“This time has been a real dark night of the soul for many of us,” he said in a March 4 open letter to the campus. “The great mystic and spiritual writer St. John of the Cross, who coined the phrase ‘dark night of the soul’ for the spiritual desolation we sometimes feel, emphasized, as all great spiritual masters do, that such dark nights are sent to purify and deepen our faith, hope and love.”

“Our response, then, demands prayer and reflection, but we must also act,” Father Jenkins said, laying out the steps Notre Dame, as a Catholic university, will take “to assist in a response to the current crisis.”

The actions come out of the work of two task forces he established:

— The Campus Engagement Task Force, which was charged with facilitating dialogue and listening to the observations and recommendations of the campus community. The group administered a campus survey and hosted listening sessions to collect the thoughts and perspectives of students, faculty and staff. The group also provided its own recommendations to Father Jenkins.

— The Research and Scholarship Task Force, which considered how Notre Dame might respond and assist the church by using its research and scholarship.

Father Jenkins said their work has resulted in a variety of immediate steps for 2019-2020 as well as ongoing efforts.

An immediate step is to initiate “prominent, public events to educate and stimulate discussion,” he said. “The task forces strongly encouraged that we use Notre Dame’s power to convene experts and foster discussion of the issues facing the church.”

So the abuse crisis will be the subject of the 2019-2020 Notre Dame Forum, he said. His office also will host two campus-wide events: one in the fall of 2019 that will offer perspectives on where the church is now, “identifying steps that have been taken and problems that must be addressed.”

A second event expected to be held later in the academic year, Father Jenkins said, would offer perspectives on where the church should go from here, focusing not only on the abuse crisis but also broader questions “the current crisis raises” such as “structures of accountability in the church, clericalism, the role of women, creating and sustaining ethical cultures, and the continued accompaniment of survivors.”

Father Jenkins said his office also will offer presidential research grants, providing up to $1 million in the next three years to fund research projects that address issues emerging from the crisis.

The ongoing efforts as outlined by the task forces will include encouraging and sharing relevant research and scholarship, Father Jenkins said.

“A number of other initiatives are already underway in service of the church,” he said, including a study of U.S. seminaries by the McGrath Institute for Church Life, under the leadership of its director, John Cavadini. The goal is to produce recommendations for ensuring that seminaries and houses of religious formation are safe environments free from sexual harassment. The institute also plans to host a conference in spring 2020 on “the co-responsibility of laity and clergy in the church,” Father Jenkins said.

The de Nicola Center for Ethics and Culture hopes to study how canon law can be revised to address more effectively sexual abuse by clergy, he added.

Notre Dame also plans to train graduates for effective leadership in the church “during and beyond the crisis,” he said.

The master of divinity graduate program in theology, the Alliance for Catholic Education teacher and leadership formation programs, and the Echo program for training catechists “are all committed to training ministers and teachers to be aware of issues of sexual abuse and policies and behaviors needed to prevent it,” Father Jenkins said.

The theology department “has undertaken discussions on how to address the crisis in theology classes, research and in the formation of students preparing for ministry,” he said.

“We will work with these and other units to encourage their efforts and to help them share their best practices with the wider church,” the priest said.

On the university’s campus itself, he noted, “preventing, reporting and addressing incidents of sexual assault or harassment by anyone … has been a high priority in recent years. We will redouble efforts to ensure that we meet the highest standards in this area.”

“As I join others in praying for survivors,” Father Jenkins wrote, “I will do what I can to prevent these terrible offenses. I encourage everyone, each in their own respective positions and roles, to contribute to real and lasting change that will prevent sexual assault and abuse, in the church and outside it, and to support survivors.

“To the extent we can do this, the dark night of the current crisis will lead us to a hopeful dawn,” he added.

NEXT: Lenten staple prompts a grammar debate: Are they fish ‘fries’ or ‘frys’?