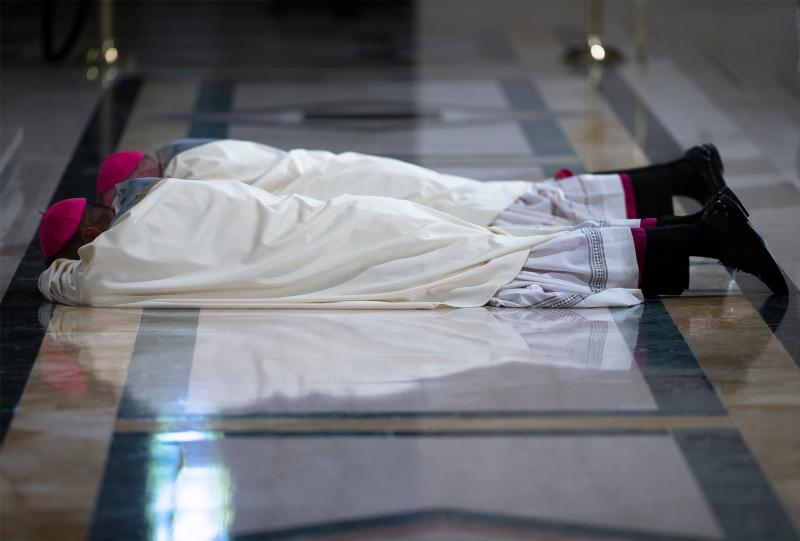 Auxiliary Bishops Joseph L. Coffey and William J. Muhm of the U.S. Archdiocese for the Military Services, lie prostrate before Archbishop Timothy P. Broglio during their episcopal ordination at the Basilica of the National Shrine of the Immaculate Conception in Washington March 25, 2019. (CNS photo/Tyler Orsburn)

WASHINGTON (CNS) — Waves of eager chatter filled the Basilica of the National Shrine of the Immaculate Conception in Washington.

Then a triumphant organ chord pierced the air and the procession began. Knights of Columbus in neat sashes, priests and bishops in pristine white vestments, and three American cardinals paced prayerfully down the aisle and slowly ascended to the shrine’s magnificent sanctuary in the Great Upper Church.

In their midst were Bishops-designate William J. Muhm and Joseph L. Coffey — two men who would walk out of the church the same day with brand new miters and crosiers, and new responsibilities to their flock that is the U.S. Archdiocese for the Military Services.

Army and Navy families, as well as kin of the two to be ordained bishops, packed the middle of the national shrine and waved excitedly as their beloved priests walked by.

And so began the afternoon Mass March 25 celebrating the episcopal ordinations of the two men who would soon officially be auxiliary bishops.

The happy occasion fell on the feast of the Annunciation of the Lord.

The celebrant was Archbishop Timothy P. Broglio, head of the military archdiocese, who delivered an impassioned homily asking Bishops-designate Coffey and Muhm to keep alive in their hearts and in their new mission the example of Mary the mother of God in receiving God’s will during the Annunciation. 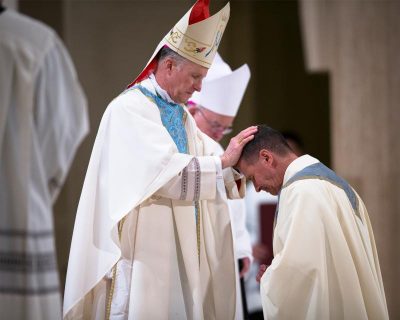 Archbishop Timothy P. Broglio of the U.S. Archdiocese for the Military Services lays his hands upon the head of Auxiliary Bishop Joseph L. Coffey during his episcopal ordination at the Basilica of the National Shrine of the Immaculate Conception in Washington March 25, 2019. (CNS photo/Tyler Orsburn)

Archbishop Broglio first illustrated the contrast between Ahaz, the king in the day’s first reading who was too haughty to put his trust in God, and young Mary’s humble acceptance of the divine will in her life. Upon God revealing his will to Mary, Archbishop Broglio said, “(she) simply states the obvious, that she is a virgin and then the words that have become a model of fidelity forever after: ‘Be it done to me according to thy word.'”

“She makes no conditions, but opens herself completely to the will of God,” Archbishop Broglio continued.

And like Mary’s journey as the mother of God, there would be challenges for the new auxiliary bishops.

“Episcopal ministry in this global archdiocese is not easy. Travel dominates the weeks. Bureaucracy muddles the relationship between bishop and priest. Many masters compete for attention,” Archbishop Broglio warned.

But, by breaking down the word “episcopal,” Archbishop Broglio revealed the mindset with which a bishop can overcome these and other challenges.

Said Archbishop Broglio: “Pope Benedict XVI … defined the ministry of a bishop in terms of the original Greek ‘episcopos’ that contains the verb ‘to see.’… Seeing from God’s perspective is seeing with love that wants to serve the other, wants to help him become truly himself. In seeing from God’s viewpoint, one has an overall vision; one sees the dangers as well as the hope and possibilities.”

Finally, Archbishop Broglio expressed his confidence that the two new auxiliaries would carry out their duties faithfully despite struggles: “No one can deny that you begin in a very challenging time when the past sins of some bishops and clergy have been widely publicized. … I have watched you interact and minister to our people. You know what you are doing.”

After the ordination ceremony and Communion, Bishops Muhm and Coffey stepped up to the ambo to thank those that had brought them to this point.

Voicing his gratitude to his parents, fellow priests and even his pro-life friends in Philadelphia, Bishop Coffey remarked, “It’s been so great to serve alongside you in the great adventure of being a priest.”

Bishop Muhm shared similar sentiments, remembering that the service of all those he had ministered to in the military archdiocese had reminded him of Mary’s words “let it be done to me according to your will.”

Bishop Coffey, 58, a priest of the Archdiocese of Philadelphia, has served since 2001 as a U.S. Navy chaplain, holding the rank of captain.

Bishop Muhm, 61, is a priest of the Archdiocese of New York and since November has served as administrator of Most Precious Blood Parish in Walden, New York. He served as a Navy chaplain from 2008 until last November.