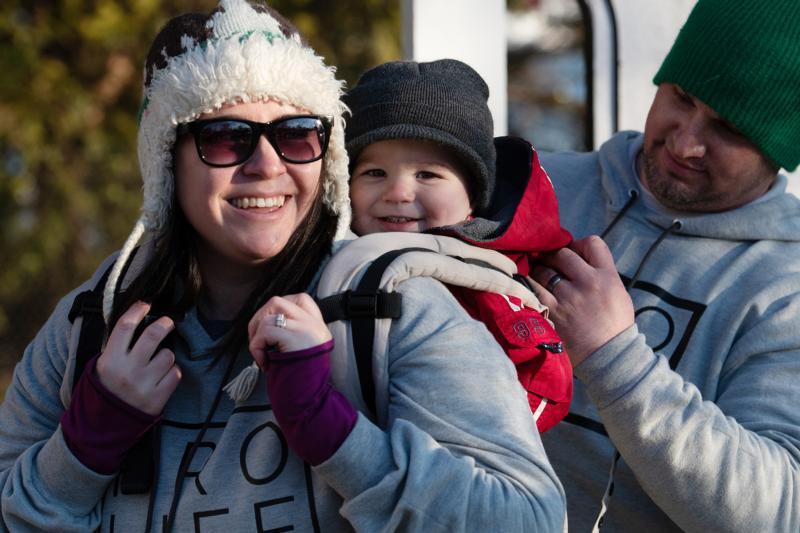 ANNAPOLIS, Md. (CNS) — As crowds gathered outside of St. Mary’s Church in Annapolis for the Maryland March for Life, Roger Donnelly handed out hundreds of pro-life signs.

Donnelly, the life activities director for the Knights of Columbus Maryland State Council, was attending the Maryland march for the first time. A parishioner of Our Lady of the Fields in Millersville, he has an issue when any vulnerable people are not protected — from preborn children, to those with disabilities, to the elderly.

He was among hundreds who turned out to make their presence felt in the streets of the state capital for the march, in its 40th year and in the midst of a politicized climate in general and in particular, a heated Maryland General Assembly session.

An increased urgency accompanied the annual event, held the evening of March 4. Just three days before two committees of the Maryland House — Health and Government Operations and Judiciary — passed a measure to legalize physician-assisted suicide with a 24-20 vote.

Three days after the march, the House of Delegates approved it, 74-66. The bill, called the “End-of-Life Option Act,” now goes to the state Senate. In reaction, Jennifer Briemann, executive director of the Maryland Catholic Conference, said March 7 it was a “dangerously flawed bill.”

As Baltimore Archbishop William E. Lori celebrated Mass at St. Mary’s immediately preceding the march, he addressed the issue with the congregation, which packed the church beyond standing room.

“As citizens, we should be very alarmed by the possibility that physician-assisted suicide could become legal in our state,” the archbishop said in his homily. “The bill under consideration is regarded by many as a ‘Death With Dignity’ bill, but the death which this bill would allow for is anything but dignified.”

Archbishop Lori said the bill would “further undermine the dignity of human life.”

The bill would allow lethal medication in pill form to be taken home. Those receiving the prescription would not be required to take the pills in the presence of a medical professional or family member — or to take them at all.

“In an already drug-ridden society, lethal pills are suddenly on the loose,” Archbishop Lori said. “In the face of Maryland’s epic opioid crisis, this is not good public policy.”

That, he said, is just the beginning of the dangers: With rising health care costs, it might mean the government and insurance companies using physician-assisted suicide as a cost-effective alternative to life-saving measures or palliative care.

“This has already happened in states where physician-assisted suicide is legal,” Archbishop Lori said, acknowledging those who support legalization would dispute that assertion. “In European countries where euthanasia has been legal for decades, it is no longer a question of a right to die, but it is now an obligation to die when one’s condition has become burdensome to the family or to the state-run medical system.”

Those issues, Archbishop Lori said, are not “a matter of Christian doctrine, but rather a matter of sound reasoning about the bad consequences of the legislation now under consideration.”

“It is also the case, however, that many people of faith, like ourselves, oppose this bill,” Archbishop Lori said. “As you know, religious proponents of legislation are sometimes accused of trying to impose their faith on others and on society at large; they are accused of trying to make church doctrine the law of the land.”

This, the archbishop said, is not true.

“In the state that pioneered the legal recognition of the God-given right of religious freedom,” he continued, “you and I have the right — and we have the duty–– not only to bring the truths and values made true by faith into the public forum, but also to shape a society where God’s gift of life is respected from the moment of conception until natural death.”

Before the Mass, Students for Life hosted a youth rally outside in a tent. Speakers addressed the organization’s pillars: education, supportive services, industry impact, public policy and rapid responses; and shared their outreach efforts.

Mount de Sales Academy brought one of the largest groups to the march, all in blue and white hats.

Senior Carleigh Stokes said this year she had attended the national March for Life on the Mall in January and the Maryland march for the first time. Education, she said, is key in keeping the pro-life movement alive for future generations.

“I became pro-life because I was educated through my Catholic school,” said Stokes, who worships at the Catholic Community of Ascension and St. Augustine in Elkridge and St. Philip Neri in Linthicum Heights. “I think (education is) the best thing you can do.”

Many area parishes sponsored buses to the Annapolis march, and many individuals came on their own. The march drew Catholics and non-Catholics alike.

Danielle Goodman, a parishioner of Christ the King in Towson, was attending for the first time this year.

“With everything happening … this year we said we’ve just gotta go,” she said. “During the day (leading up to the march), we were just praying we could be a voice for those who are unheard.”

Goodman brought her children, Casimir, 12, and Veronica, 10, “so they’ll always understand how precious life is,” she told the Catholic Review, the Baltimore Archdiocese’s media outlet.

Marchers moved from St. Mary’s campus to the area near the Statehouse, filling up part of the street for the rally, which Archbishop Lori opened in prayer. Ryan Bomberger, who was conceived in rape but was given the gift of adoption by his biological mother, was the keynote speaker.

He compared abortion to a modern slavery.

“But guess what happened to slavery?” Bomberger said. “It got abolished.”

Rosenthal is a staff writer at the Catholic Review, the news website and magazine of the Archdiocese of Baltimore.