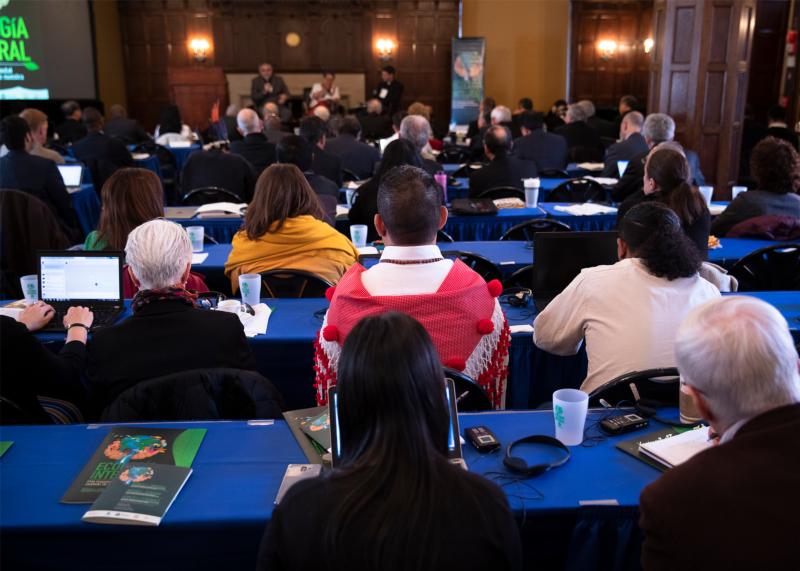 Participants listen to a presentation about “A World in Socio-Environmental Crisis” during the Integral Ecology summit at Georgetown University in Washington March 19, 2019. Much of the discussions kept in mind Pope Francis’ 2015 encyclical “Laudato Si’.” (CNS photo/Tyler Orsburn)

WASHINGTON (CNS) — Guatemalan Bishop Alvaro Ramazzini said he notices when he visits family in the U.S. that almost anywhere he goes, the lights seem to be on — even in the daytime, even if there’s enough natural light to illuminate a space.

To him, it signals a culture that he says has to change. Bishop Ramazzini and others who gathered at Georgetown University March 19-21 said the planet can no longer deal with the environmental disruptions such actions produce, leaving vulnerable populations reeling from their adverse consequences. And soon, they said, if nothing is done to curb those actions, no one will escape the consequences that result from such a culture of waste.

Bishop Ramazzini, along with other church leaders, members of indigenous communities, and environmental organizations related to the Catholic Church and other faith-based institutions, gathered in Washington in mid-March ahead of the October Synod of Bishops on the Amazon at the Vatican. Prelates and others at the synod will consider environmental situations in the Amazon and chart a plan of action.

Much of the work will keep in mind Pope Francis’ 2015 encyclical “Laudato Si’,” which speaks of consumerism and the environmental degradation it causes, such as global warming and displacement of indigenous communities, and calls people to action.

Patricia Gualinga, a member of the Kichwa indigenous community of Sarayaku, Ecuador, told those gathered not to say “those poor people,” when referring to indigenous communities or disenfranchised groups such as the poor, who are now facing the consequences of environmental problems.

“Think of yourselves,” she warned, because “those poor people” may refer to them and their neighbors someday soon when environmental problems arrive at their doorstep.

Participants at the Washington gathering looked at some of the data showing what can happen if places such as the Amazon keep experiencing deforestation at the current rate. The Amazon serves as the “world’s lung,” where global emissions of carbon dioxide can be turned into oxygen. Its deforestation is not just displacing indigenous communities who have long called the region home but may also accelerate the warming of the globe, leading to extreme weather patterns everywhere.

The church cares about such issues, said Archbishop Jean-Claude Hollerich of Luxembourg, because part of being a Christian means considering “the suffering of our brothers and sisters” and how they might be affected by people’s own actions or habits.

Bishop Ramazzini offered as an example the manufactured need for the newest lines of smartphones, which render products released just a year earlier obsolete. The consumer does not stop to consider who might be sacrificing him or herself in another part of the world to manufacture those types of object others want, but do not need.

It’s fair to question, then, whether a person who does not care about the well-being of others can be in communion with the church, Archbishop Hollerich said.

“It’s creation. There is a Creator, and that Creator has given this (Earth) to us out of love,” he said.

Caring for the planet carries out the culture of life that the church upholds, he said, and yet “we treat the earth, human beings, as if we’re the owners, so we can dispose as we like.”

Participants called for a shift, an “ecological conversion,” that leads to a change of mind, but also a change of lifestyle, one that keeps the stewardship of the planet’s resources in mind. They discussed a wide range of topics, including the role of women in the environmental movement; how the church can help indigenous populations facing violence during efforts to maintain their ancestral homes; poverty; and the social exclusion linked with environmental degradation; but also why these questions should matter to Christians and those who care about building a culture of life.

At least eight cardinals attended the Washington gathering, including Brazilian Cardinal Claudio Hummes, president of the Pan-Amazonian Church Network, which spearheaded the effort in Washington. The organization based in South America links indigenous communities and Catholic organizations in nine countries to respond to challenges facing those who live in the Amazon.

During a March 20 press conference at Georgetown, Cardinal Hummes said the synod is expected to yield concrete actions and indicate new paths of action.

Communities want action, he said, not just documents that will sit on bookshelves. They want a church that will walk with them, one that is close to them, and an effort to help the planet and humanity requires exactly that kind of solidarity, Cardinal Hummes said.

Yes, sometimes it feels as if such an effort is much like David facing Goliath, especially given the resources, and the grip a consumerist culture has on the world, Cardinal Hummes said.

“But there’s an important detail: David won,” he said.

NEXT: Catholic-Mormon dialogue is a very personal thing for Utah couple