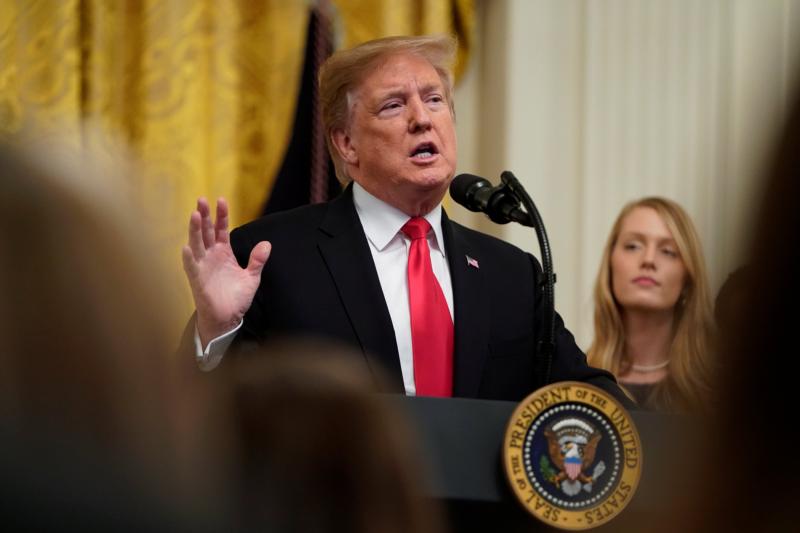 WASHINGTON (CNS) — Kristan Hawkins, president of Students for Life of America, praised President Donald Trump March 21 for taking seriously the assaults she said conservative groups are facing on campuses around the country.

“No one needs this more than the pro-life generation,” she said about Trump’s executive order to bar federal research grants to institutions that violate students’ free speech on campus and “stifle competing perspectives.”

Hawkins was among about 100 conservative activists at the White House for the signing of the order.

Ahead of the event, she told Catholic News Service that violence against conservative groups “absolutely happens on campuses all the time.”

“Speech considered unpopular is the speech that is suppressed,” she said, adding that vandalism and “outright theft” of pro-life displays is a common occurrence.

In his executive order, Trump said: “My administration seeks to promote free and open debate on college and university campuses. Free inquiry is an essential feature of our nation’s democracy, and it promotes learning, scientific discovery and economic prosperity.”

“We must encourage institutions to appropriately account for this bedrock principle in their administration of student life and to avoid creating environments that stifle competing perspectives, thereby potentially impeding beneficial research and undermining learning,” he said.

The executive order says that the heads of 12 grant-making agencies working with the director of the Office of Management and Budget “will take appropriate steps to ensure institutions that receive federal research or education grants promote free inquiry, including through compliance with all applicable federal laws, regulations and policies.”

Public colleges and universities would have to certify they comply with the First Amendment to get grants. The federal agencies include the departments of Defense, Interior, Agriculture, Commerce, Labor, Health and Human Services, Transportation, Energy, Education and the Environmental Protection Agency. Private colleges and universities would have to comply with their own stated institutional policies regarding freedom of speech.

In a statement and comments to CNS, Hawkins described what she called “a pattern of harassment” taking place on school campuses.

“Student governments and school officials use a virtual poll tax on speech they don’t like with fees, denial of the use of school fees for pro-life events, a heckler’s veto in which any disgruntled student can shut down an event, or requiring ‘trigger warnings’ that pro-life speech is imminent,” she said.

“Such administrative weapons are commonly employed against those who support both mother and pre-born infant,” she added.

“The criminalization of free speech on college and university campuses has reached epidemic proportions as simply expressing a point of view that runs counter to academic conventional wisdom can lead to ostracization and loss of basic freedoms,” Hawkins said.

In his executive order, Trump also addressed “the financial burden of higher education on students and their families,” calling it “a national problem that needs immediate attention.”

He said rising student loan debt and low repayment rates threaten “the financial health of both individuals and families as well as of federal student loan programs.

“In addition, too many programs of study fail to prepare students for success in today’s job market,” he said, adding that his executive order “will promote greater access to critical information regarding the prices and outcomes of postsecondary education.”