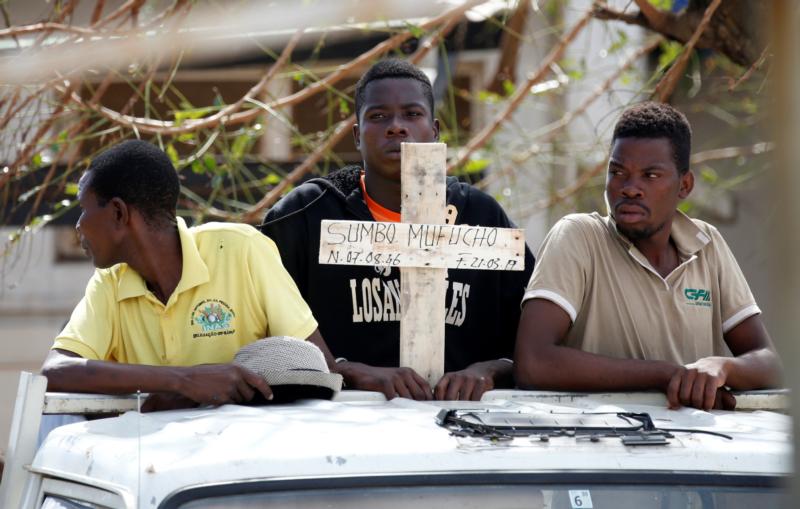 A family member of Sumba Mufusho, who died after surviving for two days sheltering in a tree in the aftermath of Cyclone Idai, holds a cross after collecting her body at a morgue in Beira, Mozambique, March 23, 2019. More than 2 million people in Mozambique, Zimbabwe and Malawi have been affected by a cyclone that has killed more than 700 people, with hundreds still missing in Mozambique and Zimbabwe. (CNS photo/Siphiwe Sibeko, Reuters)

NAIROBI, Kenya (CNS) — More than 2 million people in Mozambique, Zimbabwe and Malawi have been affected by a cyclone that has killed more than 700 people, with hundreds still missing in Mozambique and Zimbabwe.

The scale of devastation is enormous, said Father Agbonkhianmeghe Orobator, president of the Jesuit Conference of Africa and Madagascar, noting that the “real devastation is the lives that have been lost.”

The cyclone, called Idai, lashed Beira, Mozambique with winds of up to 105 miles per hour March 14, then tore inland through Zimbabwe and Malawi.

The floods it caused “have wiped out entire villages” and roads; hospitals and schools have been destroyed, Father Orobator said on the website of the Jesuits in the Zimbabwe-Mozambique province.

Also on the March 25 website newsletter, Raul Chacuamba, a young Catholic in Beira, Mozambique’s second-largest city that was almost entirely destroyed, said many people “are still with no food and water and it’s dangerous.”

“Our churches have been greatly damaged,” Chacuamba said, noting that in one parish “a big wall came down and broke all the benches, the church is now totally destroyed.” At another parish, a large tree used for Christmas celebrations fell and damaged the church.

Three parishes have collapsed and another 19 have been badly damaged in the Archdiocese of Beira, according to its Facebook page. Sixty chapels as well as church properties, including the archbishop’s residence and offices, have been damaged, it said.

The storm also took off the roofs of seven Catholic schools that serve 9,500 students in the archdiocese, it said.

“As a church, through the parishes and Caritas, we are activating an emergency plan to face the most urgent needs,” the archdiocese said.

Rescue teams in Mozambique moved hundreds of people displaced by the cyclone’s flooding to safer shelters March 25. Some 128,000 displaced people are now in camps across the vast flooded area of Mozambique, Land and Environment Minister Celso Correia told reporters.

The United Nations warned that stagnant water, decomposing bodies and the lack of sanitation in overcrowded shelters in Mozambique could create breeding grounds for water-borne diseases such as cholera and typhus.

With homes and other buildings also flattened in Zimbabwe, much reconstruction will need to be done in terms of housing and “providing shelter to the families,” said Father Frederick Chiromba, secretary-general of the Zimbabwe Catholic Bishops’ Conference.

“Psychosocial support needs to be part of the program to help people recover,” he said, according to the Jesuits’ newsletter. More than 40 volunteers are ready to provide counseling at Harare’s Dominican convent school, he said.

Father Shepherd Munaro, secretary in Mutare Diocese, Zimbabwe, said some people in badly affected areas of the country are walking miles every day to get basic supplies. They “are really in shock and pretty much shaken. They do not know where they will go from this point onward,” he said.

Catholic Relief Services is working with local Caritas and other church and relief groups in Mozambique and Zimbabwe to assess the needs and provide help.

“While the poor are the least responsible for global warming and environmental degradation, it is them who bear the brunt of its effects,” Father Orobator said.

“Let us especially use this time of Lent to help those in need in Mozambique, Zimbabwe and Malawi in whatever means possible, as individuals, communities and organizations,” he said.

NEXT: Becoming a seafarers’ chaplain was not exactly his retirement plan