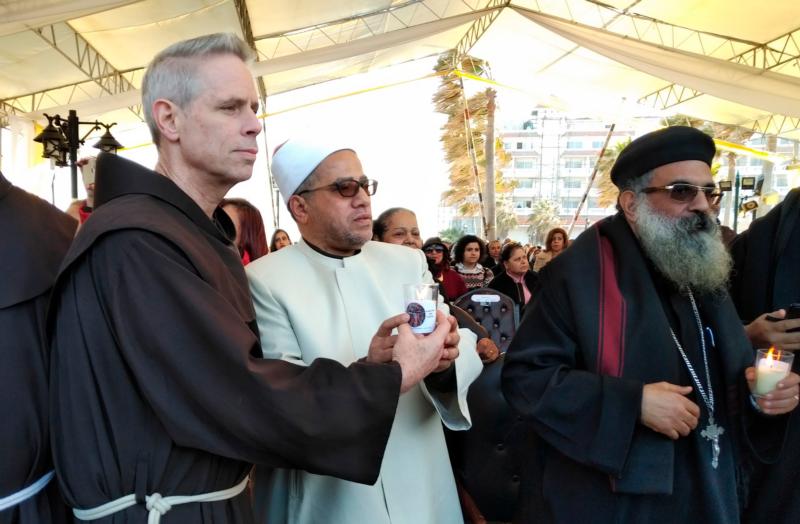 VATICAN CITY (CNS) — In Catholic chronicles, St. Francis of Assisi’s meeting with the sultan of Egypt 800 years ago is enmeshed in pious legends; in Muslim sources, there’s barely a trace of the story of the Italian friar crossing battle lines during the Crusades.

Yet Pope Francis continues to draw attention to the meeting of St. Francis and Sultan al-Malik al-Kamil in 1219 near Damietta, a port on the Nile River near where it flows into the Mediterranean Sea.

The pope sent Cardinal Leonardo Sandri, prefect of the Congregation for Eastern Churches, to Damietta in early March as his official representative at celebrations marking the 800th anniversary of the meeting.

At the main celebration March 1, Cardinal Sandri referenced both the early biographies of St. Francis, which insisted the friar undertook his voyage in the hopes of converting the sultan to Christianity, and more recent presentations of the story as St. Francis trying to bring peace in the midst of the Crusades.

“The encounter at Damietta could be seen as a failure,” Cardinal Sandri said. “The sultan did not convert, nor did his troops, and, for the most part, it did not modify the outcome of the Crusades.”

For the Catholic Church, ecumenical dialogue and interreligious dialogue are fundamentally different activities with different aims, although both usually begin by looking at beliefs and values the dialogue partners share.

Ecumenical dialogue, though, is part of the search to restore Christian unity, reaching a situation where Christians — even if they have some differences in worship, spirituality and rules — recognize each other as belonging to the one church of Christ. 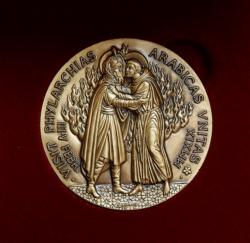 Interreligious dialogue, on the other hand, promotes tolerance, respect and mutual understanding. While the hope is that members of different religions can learn something from each other about the spiritual life, there is no goal of creating one world religion.

After Pope Francis met Sheikh Ahmad el-Tayeb, the grand imam of al-Azhar, in the United Arab Emirates in early February and signed a declaration with him on promoting “human fraternity” and respect, the pope said he thought providence had wanted “a pope named Francis” to mark the anniversary of Damietta.

“I often thought of St. Francis during this visit,” the pope added. “He helped me to keep in my heart the Gospel, the love of Jesus Christ, while I lived the various moments of the visit.”

The intersection between dialogue and proclamation — sharing one’s faith while at the same time speaking and listening respectfully to the religious faith of another person — was clear in the pope’s words.

But reaction to his visit on social media made it evident that his critics did not see that.

“You’re no St. Francis,” one person tweeted. “He was there preaching Christ to the sultan, not spewing nonsense…”

While Cardinal Sandri was in Egypt and as Pope Francis was planning to visit Morocco, another predominantly Muslim nation, March 30-31, members of the European Academy of Religion were meeting in Bologna. They had planned a panel discussion on the meeting of St. Francis and the sultan and its implications for interreligious dialogue.

Mustafa Cenap Aydin, a Muslim involved in dialogue and one of the panelists in Bologna, told Catholic News Service, “St. Francis left us a very good example of friendship and respect. But some people would rather see an angry and warrior Francis, rather than a Francis who talks calmly and respectfully.”

He has no doubt that St. Francis would have tried to share the Gospel with the sultan. “If he didn’t talk about this faith, that would be astonishing.”

Aydin said he once ran into a Catholic he hadn’t seen in a couple years and the man asked, “Are you still a Muslim?”

“I was not offended,” Aydin said, because true dialogue involves sharing what you believe and wanting the best for the other person, which does not mean going into dialogue with the goal of converting the other, but it does mean “giving a witness of their faith in a non-threatening way.”

Franciscan Father Jason Welle, dean of studies at Rome’s Pontifical Institute for Arabic and Islamic Studies, also was on the panel and outlined the various theories about what happened at Damietta and what impact the meeting had on St. Francis and on the sultan.

St. Francis left nothing in writing about why he went to Damietta, Father Welle said, but it clearly “transformed his understanding of mission. When he returned to Italy and wrote the Earlier Rule, he describes two ways that the friars could go among the Muslims. First, the friars could live among Muslims by being subject to them and not engaging in arguments or disputes, while always acknowledging that they were Christians. Second, when they see that it pleases the Lord, the friars could proclaim the Gospel and call Muslims to conversion.”

“This possibility of non-proselytizing mission was absolutely novel in Francis’ day — no one else in the Latin West foresaw a presence among Muslims without either hostility or direct attempts to convert them,” Father Welle told CNS.

“St. Francis emerged from his time among the Muslims with a new vision for Christian engagement among Muslims that no one could have foreseen,” he said. And Pope Francis “is doing fundamentally the same thing: he’s providing pastoral guidance about how to live with our neighbors, in the light of prayerful reflection on the movement of God’s Spirit among those who have not accepted the Gospel.”

NEXT: In times of crisis, church returns to basics of faith, Bishop Barron says