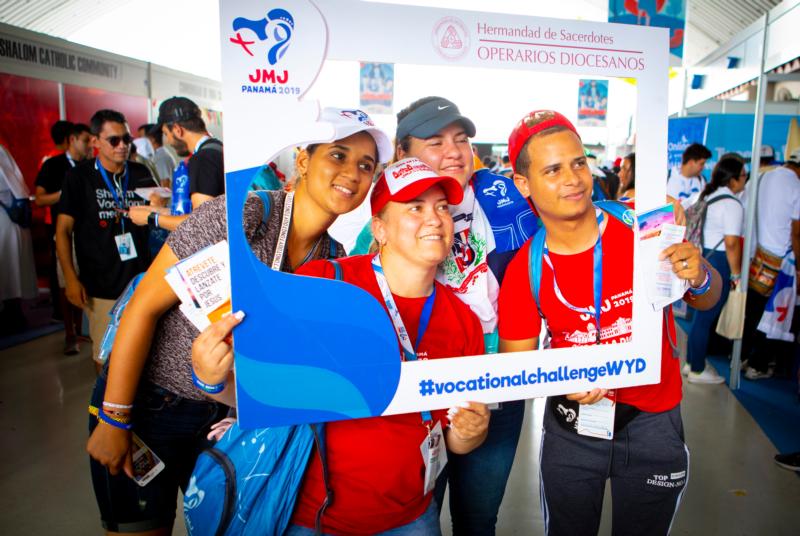 World Youth Day pilgrims from the Dominican Republic pose for a photo Jan. 24, 2019, at a vocations festival in a Panama City park, where they learned what different religious communities have to offer. Answering the Lord’s call demands the courage to take a risk, but it is an invitation to become part of an important mission, Pope Francis said March 9 in his message for the 2019 World Day of Prayer for Vocations. (CNS photo/Chaz Muth)

VATICAN CITY (CNS) — Answering the Lord’s call demands the courage to take a risk, but it is an invitation to become part of an important mission, Pope Francis said.

God “wants us to discover that each of us is called — in a variety of ways — to something grand, and that our lives should not grow entangled in the nets of an ennui that dulls the heart,” the pope said.

“Every vocation is a summons not to stand on the shore, nets in hand, but to follow Jesus on the path he has marked out for us, for our own happiness and for the good of those around us,” he said in his message for the 2019 World Day of Prayer for Vocations. The Vatican released the pope’s message March 9.

The day, which was to be celebrated May 12, was dedicated to the theme: “The courage to take a risk for God’s promise.”

That kind of risk-taking can be seen when Jesus was at Sea of Galilee and called his first disciples, who were fishermen going about their daily lives, dedicated to their demanding work, the pope said in his message.

“As with every call, the Gospel speaks of an encounter. Jesus walks by, sees those fishermen, and walks up to them,” the pope said. “The same thing happened when we met the person we wanted to marry or when we first felt the attraction of a life of consecration: we were surprised by an encounter, and at that moment we glimpsed the promise of a joy capable of bringing fulfilment to our lives.”

Jesus drew near the four fishermen and broke through the “paralysis of routine,” making them the promise, “I will make you fishers of men,” he said.

Pope Francis acknowledged in his message that totally consecrating one’s life to service in the church could be difficult in the current climate. But, he said, “the church is our mother because she brings us to new life and leads us to Christ. So we must love her, even when we see her face marred by human frailty and sin, and we must help to make her ever more beautiful and radiant, so that she can bear witness to God’s love in the world.”

“The Lord’s call is not an intrusion of God in our freedom; it is not a ‘cage’ or a burden to be borne,” the pope said.

On the contrary, it is God extending a loving invitation to be part of a great undertaking, opening “before our eyes the horizon of a greater sea and an abundant catch.”

“God in fact desires that our lives not become banal and predictable, imprisoned by daily routine, or unresponsive before decisions that could give it meaning,” he said. “The Lord does not want us to live from day to day, thinking that nothing is worth fighting for, slowly losing our desire to set out on new and exciting paths.”

But embracing God’s invitation to be part of something greater demands the courage to risk making a decision, just as the first disciples did when they “immediately left their nets and followed him,” he said.

“Responding to the Lord’s call involves putting ourselves on the line and facing a great challenge. It means being ready to leave behind whatever would keep us tied to our little boat and prevent us from making a definitive choice.”

People are called to be bold and decisive in seeking God’s plan for their lives, looking out onto the vast “ocean” of vocations, he said.

In order to help people better discern their vocation, the pope asked the church to provide young people with special opportunities for listening and discernment, a renewed commitment to youth ministry and the promotion of vocations through prayer, reflecting on God’s word, eucharistic adoration and spiritual accompaniment.

Pope Francis urged everyone, especially young people, to not be “deaf to the Lord’s call.”

“If he calls you to follow this path, do not pull your oars into the boat, but trust him. Do not yield to fear, which paralyzes us before the great heights to which the Lord points us.”

“Always remember that to those who leave their nets and boat behind, and follow him, the Lord promises the joy of a new life that can fill our hearts and enliven our journey,” he said.

Editor’s Note: The text of the pope’s message in English can be found here and in Spanish here.