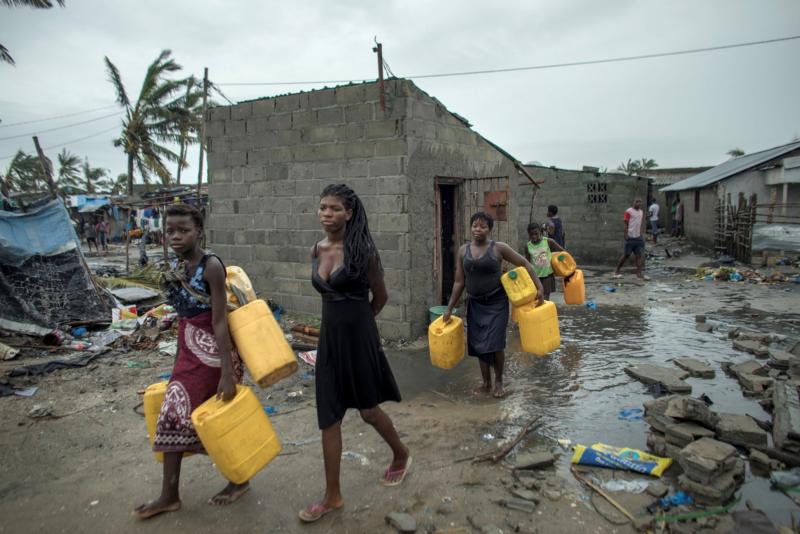 Young women carry containers March 17, 2019, in the aftermath of Cyclone Idai in Beira, Mozambique. Hundreds were feared dead in Mozambique four days after a cyclone slammed into the country, submerging entire villages and leaving bodies floating in the floodwaters, the nation’s president said. (CNS photo/Josh Estey, Care International via Reuters)

CAPE TOWN, South Africa (CNS) — Two boys at a Catholic boarding school in Zimbabwe are among the more than 300 people killed in the aftermath of a cyclone that slammed into Mozambique, Zimbabwe and Malawi in mid-March. Officials fear the death toll from the cyclone could reach 1,000.

A landslide sent rocks crashing into a dormitory at St. Charles Lwanga Seminary Secondary School in Mutare Diocese, trapping about 50 students and staff. They dug themselves out, and teachers carried the boys’ bodies for about 10 miles in the Chimanimani district, a mountainous area in eastern Zimbabwe, before the group was picked up by the army and taken to the nearest hospital.

In Mozambique, more than 200 people have died and nearly 350,000 are at risk, President Filipe Nyusi said March 19. In Zimbabwe, the government said about 100 people had died, but the death toll could triple.

“It’s very difficult to know the extent of the damage” and the death toll, with collapsed infrastructure and communication lines down, Erica Dahl-Bredine, Catholic Relief Services’ representative for Mozambique, said in a March 18 telephone interview.

Beira, Mozambique’s second-largest city and a major port, “is almost completely destroyed, and some areas outside the city are impossible to reach,” she said. The cyclone knocked out electricity, shut down Beira’s international airport and cut off access to the city by road.

“People are stranded on roofs of houses and in trees, waiting for help,” Dahl-Bredine said, noting that roads and bridges have been washed away.

With overflowing rivers, whole villages have been submerged and bodies were floating in the floodwaters, she said.

Catholic Relief Services is working with local Caritas and other church and relief groups to assess the needs and provide help, she said.

Mozambique is a long, narrow country of about 30 million people with a 1,500-mile coastline along the Indian Ocean.

The cyclone, called Idai, landed in Beira late March 14 before moving to Zimbabwe with strong winds and heavy rain.

Because Zimbabwe is a landlocked country, the “sheer force and strength of the cyclone” was worse than anticipated, Rita Billingsley, who works for Catholic Relief Services in Zimbabwe, said in a March 19 telephone interview from the capital, Harare.

With crops, livestock and homes destroyed in the storm, “about 12,000 people are believed to have lost their livelihoods” in Zimbabwe, Billingsley said, noting that numbers are expected to rise in affected countries as the extent of the cyclone’s destruction becomes clearer.

Church premises throughout Zimbabwe are being used to provide refuge for those who have lost their homes, as well as to coordinate the emergency response with all those involved, she said. With “overwhelming local support,” the church is “well placed to give a targeted and meaningful response.”

“We need to get supplies to those who need it most and quickly,” Billingsley said, noting that supplies are ready and airdrops are planned.

Also, with the destruction of Beira, the trade route to Zimbabwe will have to change and prices of goods are likely to rise, she said.

“Some goods won’t be available at all, which will harm the markets” around Zimbabwe, Billingsley said.

“This means in-kind support rather than cash” will be prioritized, she said, noting that “provision of medical supplies is a major area of concern.”

Shortages of food, fuel and medical supplies are already acute in Zimbabwe.

At the Vatican, Pope Francis prayed those affected by the flooding, which has “sown sorrow and devastation,” be able to find comfort and support.

He expressed his concern and sorrow for “the many victims and their families” at the end of his general audience in St. Peter’s Square March 20. He said he was praying that those “hit by this calamity” would find “comfort and support.”

Father Frederick Chiromba, secretary-general of the Zimbabwe Catholic Bishops’ Conference, said in a March 18 telephone interview from Harare that early warning systems for the cyclone were in place but “the extent of the damage was worse than we had expected.”

With “changing climate patterns, our droughts and other weather shocks seem to get more severe every time,” he said.

Neighboring Malawi was also affected by the heavy rains. The government confirmed 56 deaths in the flooding, which caused rivers to burst their banks, leaving houses submerged and around 11,000 households displaced.

NEXT: God’s will is clear: to seek out, save humanity from evil, pope says