Franciscans give Jordan’s king award for his peace, dialogue work 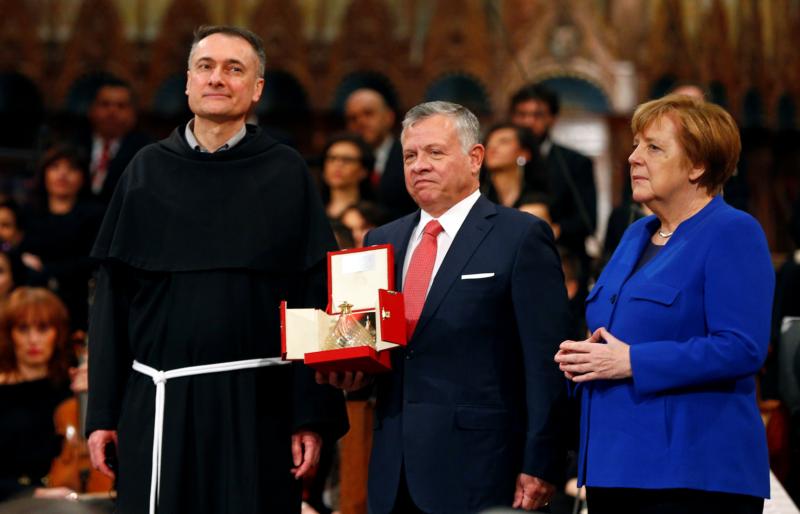 AMMAN, Jordan (CNS) — Jordan’s King Abdullah II urged greater cooperation to take on serious challenges worldwide as he was awarded a top Catholic peace prize by the Conventual Franciscans of the Sacred Convent of Assisi in central Italy.

The annual award, known as the Lamp of Peace, recognizes King Abdullah II’s tireless promotion of peace in the troubled Middle East, support of interreligious dialogue, welcome of refugees and educational reforms.

“To me, the Lamp of Peace of St. Francis symbolizes how peace lights our way forward to a better future for all people, of every faith and country and community,” Abdullah told a packed St. Francis Basilica, housing the saint’s relics and the renowned fresco series of his life.

“But it is our task to provide the fuel for that light, and what fuels global peace is mutual respect and understanding,” Abdullah emphasized, receiving strong applause.

“It is only by combining our efforts that humanity will meet today’s serious challenges — to solve global crises; heal our earth’s environment; and include everyone, especially our youth, in opportunity,” the king told the assembly. Among the crowd were last year’s award recipient, German Chancellor Angela Merkel, and Italian Prime Minister Giuseppe Conte. Franciscan Father Mauro Gambetti presented the Lamp of Peace to the king.

Abdullah asked for a moment of silence to “remember the suffering families and victims of the terrorist attack on two mosques in Christchurch, New Zealand, two weeks ago. Such evil, wherever it happens, is our suffering, too.”

As Jordan’s Hashemite monarch, the 41st-generation direct descendant of Islam’s Prophet Muhammad, Abdullah has upheld the importance of the Christian presence in his country and the Middle East.

“The principles of coexistence and interfaith harmony are deeply embedded in Jordan’s heritage,” he said. “Our country is home to a historic Christian community. All our citizens actively share in building our strong nation. Indeed, Christians have been part of Middle East societies for thousands of years and are vital to the future of our region.”

He is the custodian of the Muslim and Christian holy sites in Jerusalem, a position held by his dynasty since 1924. The king also highlighted the need to resolve the Palestinian-Israeli crisis and safeguard Jerusalem.

“I am bound by a special, personal duty to the security and future of the holy city,” he said.

His reconciliation efforts sharply contrast with other world leaders who, at this time, are taking up increasingly divisive positions on a host of important issues, including migration.

If the king’s example were followed, the world and, especially the Middle East, would be a better place to live in, said Msgr. Khaled Akasheh of the Pontifical Council for Interreligious Dialogue at the Vatican.

“His Majesty is a person with compassion toward all who suffer; he loves peace and works for it with determination, respects all religions and their followers and is very attentive to the Christian community in the Middle East and in Jordan in particular, encouraging Christians to remain in the land of their fathers and grandfathers,” Msgr. Akasheh told the Jordan Times newspaper March 27, 2019.

Jordan, under the king’s leadership, spearheaded the Amman Message, calling for tolerance and unity in the Muslim world; the World Interfaith Harmony Week; and the Common Word Initiative, which promotes respect between Muslim and Christian religious thought. The Aqaba Process, initiated by Abdullah, coordinates global efforts to combat extremism and terrorism.

The Jordanian monarch’s efforts to promote a peaceful Islam and bring an end to religious violence in the Middle East also were recognized as he was named the 2018 Templeton Prize laureate. The Pennsylvania-based Templeton Foundation said Abdullah did “more to seek religious harmony within Islam and between Islam and other religions than any other living political leader.”

Since its launch in 1981, the Lamp of Peace has been awarded to those seeking the peaceful coexistence of people. It has been granted to several political and religious leaders, most notably trade unionist and former Polish President Lech Walesa, former Colombian President Juan Manuel Santos, Pope Francis, St. John Paul II, the Dalai Lama, St. Teresa of Kolkata and Palestinian President Mahmoud Abbas.

The Lamp of Peace is a replica of a local glass oil lamp that glows at the grave of St. Francis of Assisi, who lived until 1226 and whose observations of wildlife inspired environmental ethics. Traditionally used in Italy’s central Umbria region, where Assisi is found, the small lamp contains local olive oil, considered a symbol of peace.