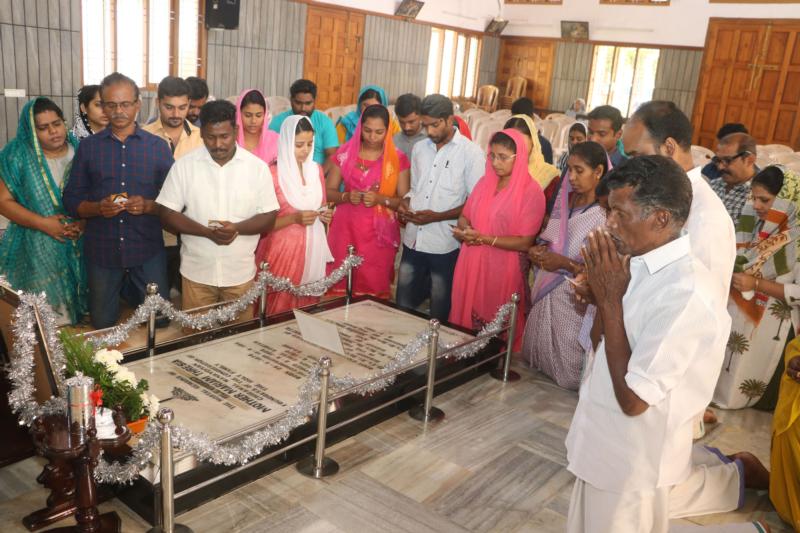 THRISSUR, India (CNS) — For the nearly 2,000 sisters and 200 women in formation who make up the Congregation of the Holy Family, the long wait is over.

Since 2012, members of the order based in Kerala state in southern India have observed strict fasts and engaged in earnest prayer awaiting recognition from the Vatican of a second miracle attributed to the order’s founder, Blessed Mariam Thresia Chiramel Mankidiyan.

Pope Francis recognized the miracle Feb. 12, clearing the way for the canonization of the religious leader popularly known as the “patroness of families.”

“We are thrilled now. Our joy has no bounds as the pope has approved the canonization of our foundress,” Sister Udaya Punneliparambil, the congregation’s superior general, told Catholic News Service.

“Mother’s life has been a life of prayer and fasting. So, we have been following her model,” Sister Punneliparambil said.

“We are happy our prayers have been heard. Now we are awaiting the announcement of the date of the canonization,” she added.

Blessed Thresia was born April 26, 1876, the third of five children to Thanda and Thoma Chiramel Mankidiyan in Puthenchira, 21 miles south of Thrissur. She founded the Congregation of the Holy Family in 1914 and died June 8, 1926.

Devout and prayerful, young Thresia resisted her parents’ plan to have her married at age 10, as per tradition. Instead, she chose to lead a life of simplicity and austerity, despite belonging to a wealthy farming family. For instance, she slept on the gravel floor of her family’s home rather than in her bed.

“I cannot sleep comfortably on a bed when Jesus is hanging on the cross on three nails,” Thresia is seen telling her mother in an hourlong documentary, “Blessed Mariam Thresia — the Patroness of Families,” produced by the congregation.

The film depicts her interest in family ministry and desire to share Jesus’ love by caring for poor, sick and dying people. It re-enacts some of her practices as recorded by her spiritual director and congregation co-founder, Father Joseph Vithayathil, whose cause for sainthood is underway, and her contemporaries.

In 1909, while under the spiritual care of Father Vithayathil, Blessed Thresia experienced stigmata. The bishop ordered that an exorcism be performed as her situation became public.

Undaunted by the setbacks, Blessed Thresia continued with her austere prayer life and dedicated herself to serving families in the community.

Father Vithayathil, under direction of the bishop in 1913, erected a “house of solitude” where Blessed Thresia could go to pray. Three friends joined her in the house.

In May 1914, she received canonical permission to launch the Congregation of the Holy Family in Puthenchira, which today is in the Diocese of Irinjalakuda.

In 1922, she moved to Kuzhikkattussery, a short distance from her native village, where she had been given eight acres by a Catholic family to launch a convent.

Struggling for funds and material to build the convent, Blessed Thresia took a 31-mile journey with another sister on foot and by boat to a Hindu king’s palace near Cochin. She planned to ask the king for funds to complete construction. Told the king was bedridden with a serious illness, Blessed Thresia made a potion from plants and instructed his assistants to apply it. The king was healed and sent word to bring the two women religious to him. He offered them high-quality teak from forests more than 90 miles away to complete the convent.

“All this wood is given by the king,” Sister Pushpa, vicar general of the congregation, told CNS while pointing to the roof of the sprawling 24-room convent, completed in 1922.

True to the charism of the order’s foundress, the convent includes a Family Retreat Center, where couples can attend a four-day retreat, offered twice a month.

“Even couples living separately for years and on the verge of divorces have gone back happily from here,” Sister Pushpa said.

Since 1987, the congregation has operated the Family Apostolate Training and Research Institute, where nearly 200 women religious, laypeople and priests are trained annually.

Blessed Thresia was declared venerable in 1999 and was beatified in 2000.

Father Vithayathil, who is buried in the same chapel with Blessed Thresia, was named venerable by Pope Francis in December 2015.