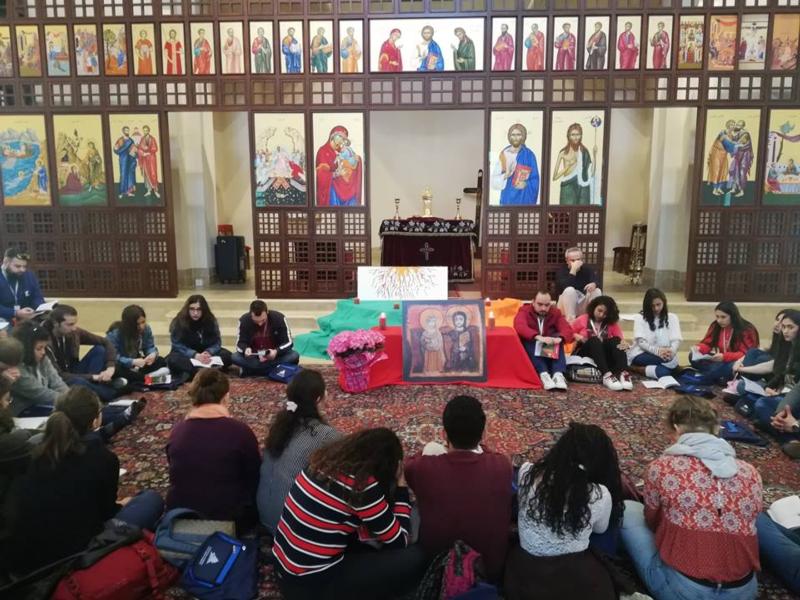 Young adults are seen during a workshop in a Beirut church at the 2019 International Ecumenical Youth Meeting March 22-26 organized and sponsored by the Churches of Lebanon, the Middle East Council of Churches and the monastic Community of Taize. More than Christian 1,600 young people from 43 countries attended the meeting under the theme, “The Righteous Shall Grow Like a Cedar of Lebanon.” (CNS photo/Middle East Council of Churches)

BEIRUT (CNS) — Amid all the violence of the world, religions must be factors of peace, Brother Alois Leser, prior of the Taize community, told Christian and Muslim young adults from 43 countries.

More than 1,600 Muslims and Christians gathered in Beirut to celebrate the feast of the Annunciation March 25 in a ceremony punctuated by songs, prayers, reflections and speeches. They were encouraged to respect others to foster genuine interreligious dialogue.

The Beirut gathering was part of the March 22-26 International Ecumenical Youth Meeting, organized and sponsored by the churches of Lebanon, the Middle East Council of Churches and the monastic Community of Taize. For the Annunciation encounter — at which participants observed a minute of silence for victims of violence around the world — the young people were joined by various Muslim religious officials and clerics; Lebanese government representatives; the papal nuncio; Christian and Orthodox prelates and religious; and brothers from the French-based Taize ecumenical community.

Lebanon has observed the Marian solemnity of the Annunciation as a joint Christian-Muslim feast and a national holiday since 2010.

Brother Alois noted that for Christians and Muslims, “Mary is an example of a believer. With confidence, Mary surrendered herself to the will of God.”

He also told them, “At this time when our world is often shaken by violent events, it is fundamental to do everything to express that religions do not want violence, but seek to be factors of peace, friendship and fraternity among all human beings.”

He said that, in the Gospel, “Jesus went beyond the cultural, social and religious barriers of his time to enter into relationships with people who were not his people, who did not share his faith.”

“Allowing fraternity and friendship to grow implies respecting others in their difference,” he stressed. “In any genuine interreligious dialogue, an attitude of respect should keep us from wanting to force the other person to think as we do.”

Brother Alois’ speech was followed by a Muslim girls’ chorus singing about the Annunciation.

Sabine Adrien, a 28-year-old Catholic who participated in the meeting with seven other young adults from Lyon, France, told Catholic News Service: “I loved the gathering, especially the prayer between Christians and Muslims. It was very simple and beautiful, all of us praying together around Mary.

“It was especially touching to be in Lebanon to experience this because it’s a country of contrasts and coexistence,” Adrien said, observing that it is “sometimes (a) difficult coexistence between religions and between sects within each religion.”

Workshops and sessions at the ecumenical meeting — at the main seaside event venue as well as in various churches in Beirut — focused on issues related to coexistence and interfaith dialogue, as well as rituals and traditions of the Eastern churches.

Speaking to participants during a March 23 evening prayer service, Soraya Bechealany, secretary-general of the Middle East Council of Churches, said: “This gathering proves to you that the Christian presence is an integral part of the Middle East. Young people of the Middle East, you are involved in the preservation of human freedom and its dignity.”

That evening, Brother Alois told participants that “Lebanon can be a gateway of understanding between East and West.”

The relations between the Taize community and Lebanon date back to the early 1980s, when the late Brother Roger Schutz — who founded the monastic community in 1940 — visited the country as its civil war was still raging.

“We believe and see that the power of peace in this country is stronger than anything else,” Brother Alois said.

PREVIOUS: Some traditional formalities do not ring true with Pope Francis