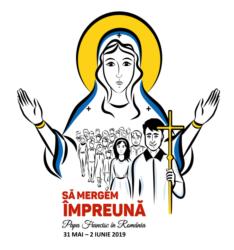 VATICAN CITY (CNS) — Visiting Romania May 31-June 2, Pope Francis will stop at six destinations, including a popular Marian shrine in the Transylvanian region.

He also will beatify seven bishop-martyrs of the Eastern-rite Romanian Catholic Church, who died during a fierce anti-religious campaign waged under the communist regime in Romania.

His visit to the predominately Orthodox country will be his 30th foreign trip after visiting Morocco in late March and Bulgaria and Macedonia in early May.

The trip will include visits to the Romanian Orthodox and Roman Catholic cathedrals, celebration of a Latin-rite Mass and an Eastern-rite Divine Liturgy, as well as separate meetings with political leaders, young people and families as well as members of the Roma community.

He will visit the capital, Bucharest, the cities of Bacau, Iasi, Sibiu, Blaj and the Marian shrine in Sumuleu Ciuc, a neighborhood of Miercurea Ciuc and an important place of pilgrimage for Hungarian Catholics, especially on Pentecost, which is June 9.

The overwhelming majority — almost 82 percent — of Romania’s 20 million inhabitants say they belong to the Romanian Orthodox Church led by Patriarch Daniel. About 6 percent of the population identifies itself as Protestant and over 4 percent identify as Catholic, belonging either to the Romanian Catholic Church — an Eastern rite — or the Latin rite.

The Vatican released the following schedule March 25, leaving out the exact times for a number of events. Times listed are local, with Eastern Daylight Time in parentheses.

— 1 p.m. (6 a.m.) Meeting with civil and political leaders and members of the diplomatic corps at the Cotroceni Palace. Speech by pope.

— Joint Prayer of the Our Father in the new Romanian Orthodox cathedral. Greeting by pope.

— Celebration of Mass at the Catholic Cathedral of St. Joseph. Homily by pope.

— Celebration of Mass at the Marian shrine in Sumuleu Ciuc. Homily by pope.

— Transfer by helicopter to the Iasi airport.

— Marian gathering with young people and families in the square across from the government Palace of Culture in Iasi. Speech by pope.

— Celebration of the Divine Liturgy and the beatification of seven martyred bishops of the Eastern-rite Romanian Catholic Church at Blaj’s Liberty Field. Homily by pope. Recitation of the “Regina Coeli” prayer.

— Meeting with members of the Roma community. Greeting by pope.

— Transfer by car to the city stadium.

— Transfer by helicopter to the Sibiu airport. Farewell ceremony.