Spain sees jump in ordinations to priesthood from 2017 to 2018 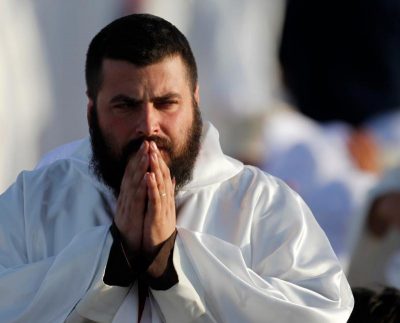 A priest prays during Mass in Madrid Aug. 21, 2011. Ordinations to the priesthood in Spain have soared by 24 per cent over the last year. (CNS photo/Susana Vera, Reuters)

MANCHESTER, England (CNS) — Ordinations to the priesthood in Spain have soared by 24 percent in the last year.

In 2018, a total of 135 men were ordained priests compared to 109 in 2017, according to statistics released March 12 by the Spanish bishops’ conference.

In addition, fewer seminarians dropped out of classes during the last year — 123 compared with 152 the previous year — but there has been an overall decrease in the number of men entering seminaries in the same period, down from 1,263 to 1,203.

Father Julio Gomez, a priest who runs four parishes in the Diocese of Palencia, said the rise in ordinations was accidental rather than the result of a deliberate policy.

“I think it’s a casual growth, as there is no a national vocational strategy in the church in Spain, which could explain these growing numbers,” he said in an email to Catholic News Service.

But he said it was significant that nearly half of the seminarians came from just 15 of the 70 dioceses in the country.

There are seven dioceses and seven seminaries in Spain that “stand out in a clear way from the rest,” he said.

“It would be very interesting to make a deeper study of the reasons of their success, but I could point some evidence for it: traditional and orthodox bishops, teachings, and formation, popular religiosity, a lot of young priests who create a vocational culture in their dioceses, a good and active youth ministry,” Father Gomez said.

“The Basque Country is one of the most secularized regions in Spain, with few vocation numbers over the last 30-40 years,” he added. “But in the last 10 years, three new very good bishops have been appointed. They are very active and orthodox, and now they have 33 seminarians.”

There are also 14 Redemptoris Mater seminaries in Spain training priests of Neocatecumenal Way from around the world. Enrollment in those seminaries stands at 230, about 20 percent of the country’s total.

Twenty-four diocesan seminaries had fewer than five seminarians entering the current academic year, the figures showed, with one recording no seminarians and three receiving just one.

NEXT: Pope in Morocco: Highlighting Catholic-Muslim ‘dialogue of solidarity’