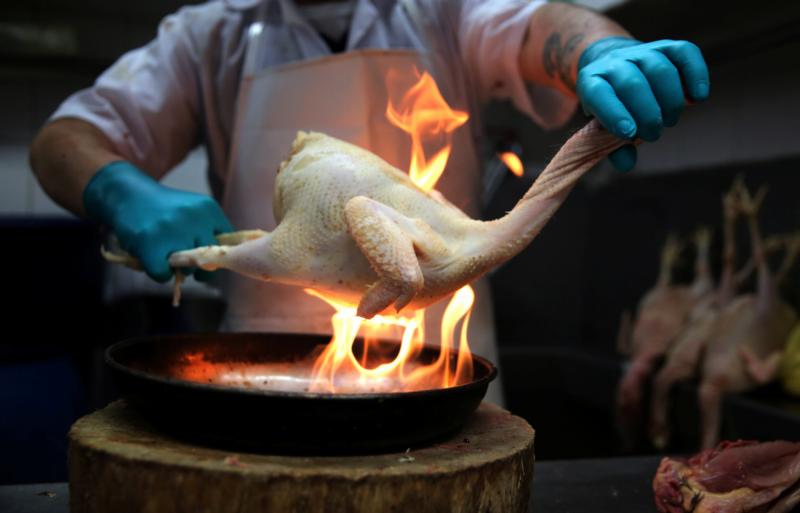 A butcher in Lima, Peru, uses fire to pluck feathers from a chicken July 25, 2017. Speakers at a Vatican conference on sustainable development said the food people choose at the supermarket and cook in their kitchens can make a huge difference in helping address the global problems of hunger, obesity and climate change. (CNS photo/Mariana Bazo, Reuters)

VATICAN CITY (CNS) — The food people pick at the supermarket and cook in their kitchens can make a huge difference in helping address the global problems of hunger, obesity and climate change, a number of speakers said at a Vatican conference on sustainable development.

But helping the planet and human health will need more than a change in behavior, said Vandana Shiva, a quantum physicist and Hindu activist.

The trend in modern industrial agriculture is to get to a point where farming can be done without local, independent farmers, she said.

“If you do farming without farmers, you will have food production without care, it will be toxic food and, even if it is plant-based, toxic food will still make you very ill,” she said.

Shiva, who advocates biodiversity and cultural diversity as part of fighting poverty, hunger and climate change, was one of dozens of speakers invited to the Vatican for a three-day international conference on how religions can contribute to the world reaching the Sustainable Development Goals by 2030.

The conference, held March 7-9, was jointly organized by the Dicastery for Promoting Integral Human Development and the Pontifical Council for Interreligious Dialogue. It brought together a large number of religious leaders from all major faith backgrounds as well as advocates and experts in the fields of development, the environment and health care.

Even though the problems the U.N. development goals seek to address are massive and complex, a number of speakers said March 7 that an individual’s seemingly small step has a big impact.

The first step, Shiva said, must be with food.

“We can start eating in ways that protect the planet and our health” and do not use toxic pesticides, herbicides and other poisons that “contaminate the world,” she said.

Rene Castro Salazar, assistant director general at the U.N. Food and Agriculture Organization, said 16 percent of all food grown for consumption is left behind in fields and wasted. The old practice of “gleaning,” in which people, particularly the poor or marginalized, were allowed to gather what was left behind from a harvest, has been stopped “because it is not a good business.”

Another 16 percent of the food that makes it to supermarkets or sellers is thrown away or wasted because the products, mostly fruit and vegetables, “are ugly.”

Being able to recover and use perfectly edible food from these two areas in the food production and distribution chain “would be enough to feed all the hungry people in the world,” he said.

Experts know what needs to be done to feed the hungry — an estimated 821 million people, he said, because they have the skills and instruments to do it. But the harder challenge, he said, is what to do to stop the other pandemic — the 1.9 billion people who are overweight or obese.

Overeating impacts human health, costs of health care, nature and the climate, he said. For example, one kilo of beef requires 15,000 liters of water while a kilo of tomatoes needs just 13 liters.

Is the solution not to eat beef? he asked. “I don’t think so. The problem is that people in developed countries are eating 100 kilos of beef per year and people in Africa are only eating four kilos per year. That is a problem of equity there, and (by) balancing that we can do a lot to reduce climate change.”

“Present-day modern conditions and the demands of modern livestock industry and factory farming are not consonant with” Judaic teachings about respecting and caring for creation and, therefore, “raise questions to whether a carnivorous diet today can be considered ethically legitimate at all.”

Scattered applause in the audience gradually spread until Rabbi Rosen looked up from his text and smiled, saying, “Glad I have some fellow vegans here.”

The book of Jewish law, the Talmud, “prohibits any wanton destruction, any waste, pollution, even over ostentation and overindulgence. In other words, Judaism sees as fundamentally religiously offensive a lifestyle that Pope Francis has described as a throwaway culture,” he said.

Shiva said hope comes from understanding science and “understanding that our ancient teachings” already teach all the right and just ways people should be living and treating each other and creation.

That is what “Laudato Si’,” Pope Francis’ encyclical on the environment, “was waking us up to, that we are not here to conquer and master. We are part of one human family, on one mother earth,” she said.

Religions have in common a sense that humanity is a custodian of creation and was meant to “enjoy the gifts without greed,” she said.

“It is the greed that has caused a billion people to be hungry” and has caused obesity or overeating, which in turn leads to chronic diseases, Shiva said.

People need to remember their duty toward creation and bring back a sense of “the sacredness of food,” water, the air and one’s body.

It is not about criminalizing other people’s food choices, for example, eating animal products or not, she said. It is about correcting one’s own habits and mindset and choosing food and farming methods that help nature and farmers.

For example, soy production in the Amazon has had devastating consequences on the land, the people and the economy there and the health of those who eat the soy products because of the use of pesticides and genetically modified organisms, she said.

“Food production and food consumption are nothing more than care for creation. If we do that right, everything else will fall into place. In Greenland they will eat fish, in the Sahara they will have to live on milk products and in places where vegetables grow they will eat lots of vegetables,” she said.

“Where we begin is small, and we can all do it,” she said.

PREVIOUS: Pope: God is purifying the church with ‘unbearable’ pain of abuse scandal