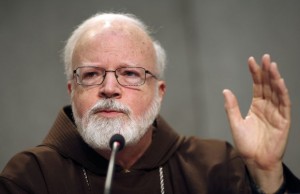 WASHINGTON (CNS) — As polarization on the issue of abortion continues to increase throughout the country, Massachusetts legislators in early April introduced bills to expand abortion access throughout the state, in a similar manner to the Reproductive Health Act passed in New York.

In a statement released April 6, Boston Cardinal Sean P. O’Malley condemned the bills, calling them “threatening to human life and dignity” and urging “(opposition) even by those who support the Roe v. Wade decision.”

A bill in the Massachusetts Senate, filed by Democratic Sen. Harriette L. Chandler, and a companion bill in the state House allow abortion with no restrictions up to the 24th week of a pregnancy.

The Senate bill also provides for abortions past that point if “the abortion is necessary to protect the patient’s life or physical or mental health, or in cases of lethal fetal anomalies, or where the fetus is incompatible with sustained life outside the uterus.”

Medical judgment, the bill stipulates, “may be exercised in the light of all factors — physical, emotional, psychological, familial and the person’s age — relevant to the well-being of the patient” before a practitioner performs an abortion.

Legal professionals have pointed out that exceptions for “health” can be used to justify an abortion for almost any reason.

In that case, Aden noted, “health” is construed so broadly that it effectively “gives you abortion on demand.”

Notably, the Massachusetts bills require consent forms only from the woman who is seeking to have a procedure performed, which ostensibly precludes the possibility of parental consent before a minor’s abortion.

Cardinal O’Malley remarked that he was not addressing “the proposed legislation from a religious perspective but as an issue of human rights, in this case the right to life” and that he “(does) not seek to impose the Catholic Church’s teachings on a diverse society.”

He then described the bills as ignoring vital moral dimensions of the abortion issue, and in that way blinding women and doctors to the true consequences of their actions.

“While the procedure has significant clinical dimensions, there is also a human reality that deserves more adequate recognition at any stage of development,” Cardinal O’Malley said. “By depersonalizing the reality, the legislation dehumanizes the decision faced by women, their families and physicians.”

The cardinal stressed the Catholic Church’s dedication to giving women life-preserving options if they are in crisis pregnancies.

“The Archdiocese of Boston today sponsors Pregnancy Help to provide spiritual and material assistance to women facing difficult choices about abortion,” he said. “We do not seek to judge or blame individuals, particularly women and families faced with excruciatingly difficult pregnancies.”

NEXT: Much to do, and do right, on child sexual abuse, archbishop says