Archbishop Gregory in his own words: roundup of quotes on various issues 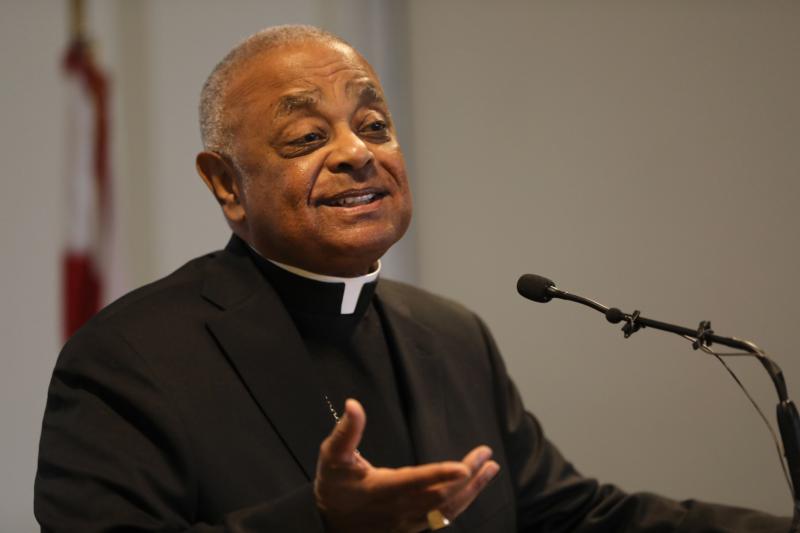 Archbishop Wilton D. Gregory speaks during a news conference in the pastoral center at the Archdiocese of Washington April 4, 2019, after Pope Francis named him to head the archdiocese. He had headed the Atlanta Archdiocese since 2005. (CNS photo/Bob Roller)

WASHINGTON (CNS) — The following are quotes on a variety of topics from Archbishop Wilton D. Gregory, named to head the Archdiocese of Washington April 4 by Pope Francis. They were compiled by the Catholic Standard, archdiocesan newspaper of Washington, from Catholic News Service reports, The Georgia Bulletin, newspaper of the Archdiocese of Atlanta, and the website of the Atlanta Archdiocese, which Archbishop Gregory had headed since 2005.

“Pope Francis has helped me to focus once again on the joy in my pastoral ministry,” Archbishop Gregory said in a 2018 interview for Commonweal magazine with John Gehring. “He (the pope) has challenged me genuinely to believe that the Gospel is and should be the source of the church’s joy. His own approachable, cheerful and hopeful style in exercising the papacy reminds me that shepherds must exude joy, or they will fail to lead anyone else to discover it.”

At the Archdiocese of Atlanta’s 2014 Eucharistic Congress, Archbishop Gregory urged people to find candidates for discipleship by following “the example of Christ himself.” Jesus, he said, found would-be disciples sitting at a well, at a tax collector’s table, on the road to Damascus, “in the most ordinary places of his time.” Archbishop Gregory said that today, disciples might be found “under the city overpasses or standing in soup lines, in prisons where they may languish under perhaps well-deserved punishment but with hope, or in high-rise office buildings.”

“My anger and disappointment, shared by Catholics and others, are only heightened by the reality that leaders who have engaged in or neglected to protect others from such damaging and deviant behavior have for many years failed to be held accountable — and have even risen to leadership positions,” Archbishop Gregory said, in a Aug. 9, 2018, print and video statement on the website of The Georgia Bulletin. “We must do better — for the sake of all victims and survivors of sexual abuse and for the sake of everyone whom we serve.”

“There is significant ecumenical and interfaith agreement that the death penalty needs a much more restricted application. The pope has cautioned us that its employment is never validated. What is most difficult for some people to admit is that these inmates, in spite of the horrendous acts of violence of which they may be guilty, are still human beings. The violence that they may well have inflicted on others does not rob them of their human dignity.

“This is the very same truth that underpins the dignity of nascent life within the womb. Infants waiting to be born are also worthy of the reverence that all human life enjoys. Just as there are people who do not see how violent people can still have their humanity acknowledged, there are those who fail to accept the human dignity of those just waiting to be born. The people who reject the humanity of the violent criminal assert that they are not worthy of human dignity because they forfeited innocence by committing crimes — unlike those innocently awaiting birth. But our human dignity does not rest in our innocence, but on the fact that we all have been created by God himself. Human dignity is never dependent upon race, age, social class, legal immigration status, criminal background or health.” — From Archbishop Gregory’s Jan. 10, 2019, “What I Have Seen and Heard” column for The Georgia Bulletin.

“We must teach our children the ways of peace, the pattern of respecting and loving others as Jesus has commanded us. This is more than the mere tolerance of the differences of other people. It is the positive acceptance of people of other faiths, races and cultures. I have repeatedly admonished our youngsters at confirmation that they must never view people who are different from them as enemies, rivals or somehow inferior. Our youngsters are subjected to so much violence — in movies, in video games, in cyberspace and even in their streets.” — From Archbishop Gregory’s March 21, 2019, “What I Have Seen and Heard” column for The Georgia Bulletin.

“The real legacy of which Dr. King himself would be most proud are the opportunities that now exist for young people of color and young white people to see each other as brothers and sisters,” Archbishop Gregory said at the Archdiocese of Atlanta’s 2006 Mass honoring the Rev. Martin Luther King Jr. “The enduring legacy is the horizon of possibilities that exist for this nation to live out the fulfillment of its lofty heritage of equality and the unfettered human potential that was restricted to only one segment of society when he first began the struggle for freedom.”

“We are so richly blessed here in the Archdiocese of Atlanta by the life and faith of our Hispanic sisters and brothers who are present throughout the 69 counties of north and central Georgia. They not only add to our growing population, but they bring us a vision of the Lord’s presence in his church that is invigorating and buoyant. Their devotional life, their family life and their deep Catholic faith all make us a much more vibrant church.

“Each community that is a part of this local church has gifts to offer, and each one does so willingly and generously every day…” From Archbishop Gregory’s Sept. 20, 2018, “What I Have Seen and Heard” column for The Georgia Bulletin.

(This is excerpted from a letter to Catholics in the Archdiocese of Atlanta written by Archbishop Gregory after the Supreme Court’s June 2015 decision legalizing same-sex marriage in the United States.)

“Every court decision is limited in what it can achieve; again, this one is no exception. It does not change the biological differences between male and female human beings or the requirements for the generation of human life, which still demands the participation of both. It does not change the Catholic Church’s teaching regarding the sacrament of matrimony, which beautifully joins a man and woman in a loving union that is permanent in commitment and open to God’s blessing of precious new life.

“This judgment, however, does not absolve either those who may approve or disapprove of this decision from the obligations of civility toward one another. Neither is it a license for more venomous language or vile behavior against those whose opinions continue to differ from our own. It is a decision that confers a civil entitlement to some people who could not claim it before. It does not resolve the moral debate that preceded it and will most certainly continue in its wake.”

“Even as we redesign Catholic schools in many areas that have seen significant demographic shifts in population and establish new schools for growing communities, we cannot lose heart or cease to focus on the mission that comes to us from apostolic times — to proclaim Christ risen from the dead… If we look only at yesterday and at the models and triumphs we enjoyed, we may not be able to see the great possibilities that tomorrow holds for us.” — From Archbishop Gregory’s homily at the opening Mass at the 2006 convention of the National Catholic Educational Association, held in Atlanta.

The environment and the poor:

(This is excerpted from Archbishop Gregory’s letter to Catholics of the Archdiocese of Atlanta after Pope Francis issued his 2015 encyclical on the environment, “Laudato Si’ — on Care for our Common Home.”)

“The Holy Father wants us all to take seriously the issues that face our planet — not only from an economic perspective, but out of genuine ethical concern for all of the people with whom we share it. Pope Francis calls us to embrace an integral ecology that brings every dimension of our political, social, financial, ecumenical and scientific worlds together in serious dialogue.

“There are no easy or facile solutions to the challenges we face in protecting and preserving the resources that belong to all of humanity. We must consider the impact of our lifestyles on the poor and the vulnerable, who suffer immediately and profoundly from the excesses of development that can provide great wealth and benefits at their expense. The Holy Father urges us to continue to work together across political, national and ideological divides to address the issues that both benefit and threaten our contemporary environment.”

“Priests do not impart a mundane service or deliver a product that they themselves do not use and in which they do not believe. Priests literally market a spiritual joy that they themselves depend upon and in which they find spiritual strength in their love for the Lord Jesus.” — Archbishop Gregory in a talk at a symposium on the priesthood held in 2011 at The Catholic University of America.

“Every good homily always begins on your knees. Then you should return to the word of God,” Archbishop Gregory said at a 2014 convention of the National Association of Diaconate Directors, held in Atlanta. He noted that Pope Francis in his 2013 apostolic exhortation, “The Joy of the Gospel” (“Evangelii Gaudium”), wrote, “Trust in the Holy Spirit who is at work during the homily is not merely passive but active and creative. It demands that we offer ourselves and all our abilities as instruments which God can use.”