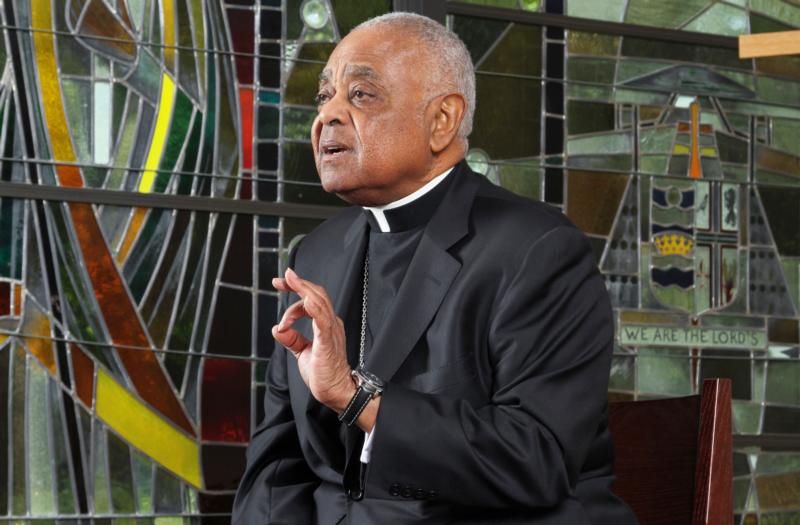 ATLANTA (CNS) — As he prepares to leave the archdiocese of Atlanta for his new assignment in Washington, Archbishop Wilton D. Gregory shared the memories he has made and asked for prayers during an April 11 interview with the Georgia Bulletin, archdiocesan newspaper.

“It seems to me that we here in Atlanta are in a privileged position. We are experiencing growth and expansion while many other dioceses are experiencing contraction and realignment of existing structures,” said the archbishop, who had led the church in Atlanta since 2005.

“And we’re building churches and expanding facilities, so we are enjoying right now certainly a great blessing as the Lord,” he added.

In an Atlanta news conference in early April, the archbishop said he doesn’t think in terms of a legacy.

He said he takes the greatest satisfaction from having come to “know this diocese well and I think that’s an important accomplishment for any pastor to be able to say that after a certain number of years, ‘I know, and I love my people.'”

He said that as he has traveled around the archdiocese, people will come up to him often and ask, “Don’t you remember me?”

“Well, I may remember the face, I may even remember the occasion, but my comeback has always been, ‘well you gotta’ remember there’s 1,200,000 of you and one of me,'” he said laughing.

His time in Atlanta brings fond memories, including the annual June gathering of the Eucharistic Congress, started by the late Archbishop John F. Donoghue of Atlanta.

“I have grown to love the Eucharistic Congress,” Archbishop Gregory said. “It is a great moment and celebration of the vibrancy and the diversity of this local church.”

His favorite moment of the congress is after the initial procession when he takes the Blessed Sacrament to the chapel and then listens as the rest of the procession makes its way to the assembly hall.

“And I always thought that I was listening to the voice of God in many different languages and cultures of the folks who were processing into the assembly hall where the Blessed Sacrament would eventually be brought in. It often sent chills up my spine to hear, not to see, but to hear the voice of this church in prayer,” he said. “That’s the church in all of its ethnic and cultural attire and its music and its instruments. I always knew when the Vietnamese community came because they have the largest drum in Christendom.”

Of the 1.2 million Catholics in Atlanta, approximately half are Hispanics. The archbishop said the archdiocese has done a good job in welcoming immigrant communities whether Latino, Vietnamese, or African, but certainly can do more.

The communities bring with them a “heritage of faith, a deep religious identity and that energizes this local church. Now, sometimes it creates, you know, a challenge because you’ve got to make sure that everybody’s in the family, and everybody feels comfortable and loved and respected. But when they bring their gifts, the church blossoms.”

In Washington, where he will be installed as new archbishop May 21, Archbishop Gregory will reside in an apartment above one of the largest Hispanic parishes of the district.

“The archbishops have lived there for any number of years,” he said about the apartment. “I’m living over the church.”

When asked his hopes for Atlanta’s Catholic community, Archbishop Gregory said: “My hopes would be that you get a good, loving archbishop who from day one realizes that he’s among the most fortunate of all people.”

When he was an auxiliary bishop in Chicago, Archbishop Gregory had the responsibility of installing and introducing new pastors to the parishes in his territory. He would always mention the “one glaring fault” of any new pastor– that he was not the former pastor, a way of reminding parishioners what is involved with change of leadership.

“He’s going to come in and he’s not going to do things exactly as they were. He has to come to know you and respect you and understand you. But you can’t expect him to be exactly like the pastor he has replaced,” reflected Archbishop Gregory. “None of us are clones. That’s the beauty of it.”

The archbishop leaves behind the 2015 Pastoral Plan as a living document.

“We wrote it to kind of guide us for the next six to seven years,” he said. “So, it’s a platform that the new archbishop can use, but that he can change. He can do another survey or another means of gathering the input of people and saying ‘now, you’ve followed this for six or seven years, where should we go now?'”

He also said that everyone — the laity and clergy — has roles in helping the church address the church abuse crisis and to support priests.

The archbishop said lately he has been using a quote attributed to Cardinal John Newman, who is set to be canonized soon.

When asked about the topic of laypeople in the church, Cardinal Newman said in response: “It would look foolish without them.”

When asked how his years in Atlanta prepared him to serve Catholics in the nation’s capital, he said it prepared him “in the sense that I’ve discovered if you open yourself up to new ventures, to new experiences, to new people, God uses that as a blessing. It helps to develop you.”

Archbishop Gregory asked for specific prayers from the faithful in Atlanta as he leaves them.

“I ask you to pray that I get a generous and constant outpouring of the Holy Spirit that would provide me with the wisdom, the courage, the love and the patience to love the people to whom I am being sent as much as I have come to love the people that I am leaving behind.”

Golden is editor of the Georgia Bulletin, archdiocesan newspaper of Atlanta.

NEXT: WHO guidelines on kids’ screen time provide more ammo for parents