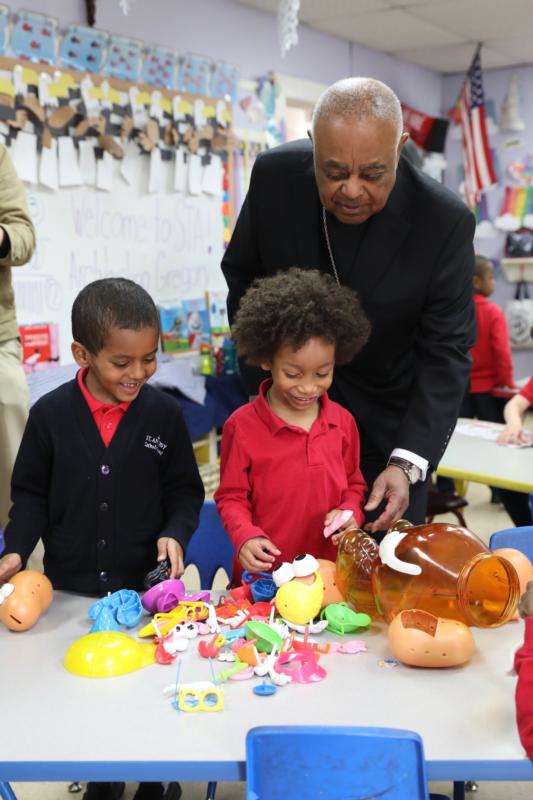 WASHINGTON (CNS) — A rainy Washington morning greeted the new archbishop of Washington April 5 as he began to get to know his Washington home.

The day after being named the seventh archbishop of Washington by Pope Francis, Archbishop Wilton D. Gregory, accompanied by his predecessor Cardinal Donald W. Wuerl, visited some of the sites and people of the Archdiocese of Washington, which includes the nation’s capital and the five surrounding Maryland counties.

The first stop was Catholic Charities of the Archdiocese of Washington where the new archbishop was greeted by Msgr. John Enzler, president and CEO of Catholic Charities, other leaders of the agency and some of its clients.

Archbishop Gregory visited each class and greeted students, shaking their hands, asking and being asked questions, and speaking Spanish and English. In sixth grade, he met the class pet, King Louis, a bearded dragon. In the second-grade class, he told the students his favorite movie is “The Wizard of Oz.”

He also told them his favorite class was history.

Although he is overjoyed to be in Washington, he told the second-graders he will miss his community in Atlanta, where he was archbishop since 2005.

“It’s something that is going to cost me some tears to leave the Archdiocese of Atlanta, where I lived for 14 years and made many, many wonderful friends, including little friends,” he said. “It’s going to be hard for me to say goodbye to them. But, as soon as I get off the plane and I’m in D.C., I’m going to feel right at home.”

Archbishop Gregory also met a fifth-grade student who is discerning a vocation to the priesthood. The prelate told the youngster that he himself was in fifth grade when he began thinking about being a priest.

That afternoon, the archbishop and Cardinal Wuerl visited the Little Sisters of the Poor at their Jeanne Jugan Residence for the elderly poor in Washington. The 11 sisters who live in the residence were joined by members of their community who traveled from other residences in nearby states.

The archbishop told the sisters he saw the great work they did when he was an auxiliary bishop in Chicago. “Now I’m glad to be able to see the wonderful work that you do here, and to have a chance to visit with you on this first trip to my new home in the Washington Archdiocese. But I assure you, it won’t be my last visit to you.”

He also asked for their prayers.

Later that afternoon, Archbishop Gregory visited and celebrated Mass at the archdiocese’s St. John Paul II Seminary in Washington and joined the seminarians and priests there for dinner. That evening, he visited a fish fry at Nativity Parish in Washington.

With his busy first full day as the newly appointed archbishop of Washington, Archbishop Gregory stayed true to a pledge he made at the news conference after his appointment was announced: “The best time for any bishop is the time they spend with their people. I want to be in the midst of our people, listening to them, praying with them, dining with them. … I want to be in the pews with the people.”

Restuccia writes for the Catholic Standard, archdiocesan newspaper of Washington.