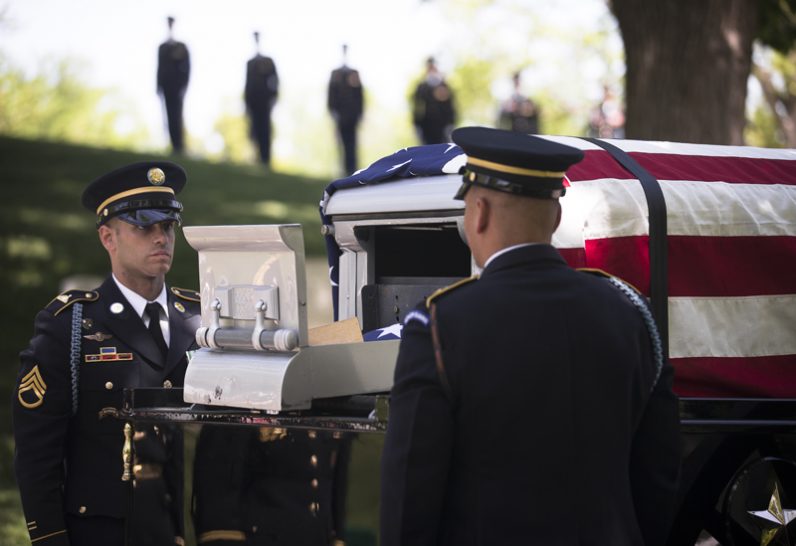 Honor guard members stand watch over the urn and folded ensign of Father Francis Brett April 24, 2019, on Chaplains Hill at Arlington National Cemetery. The cremated remains of Father Brett, a priest of the Diocese of Knoxville and longtime Army chaplain, were buried in the same gravesite of his Father Robert Brett, a Navy chaplain who was killed while serving in Vietnam in 1968. The brothers grew up in the Grays Ferry section of Philadelphia. (CNS photo/Tyler Orsburn)

ARLINGTON, Va. (CNS) — Amid the pomp and ceremony that marks a military burial, Father Francis Brett was reunited after more than 50 years with his younger priest brother at Arlington National Cemetery.

The former Vietnam War-era Army chaplain and priest of the Diocese of Knoxville, Tennessee, was laid to rest April 24 in the same grave as his brother, Father Robert Brett, who died in a bunker in Vietnam in 1968 while serving as a Navy chaplain.

About 100 family members and friends witnessed the ceremony that reunited the brothers from a large Irish Catholic family from the Philadelphia neighborhood of Grays Ferry.

Bishop Richard F. Stika of Knoxville attended as well, offering a few words of remembrance for the priest, who was known as Father Frank.

Timothy Lawson, a cemetery spokesman, told Catholic News Service that staff historians could not confirm whether the Brett siblings are the only decorated Catholic military chaplains buried together in the sprawling burial ground outside of Washington, but said such an arrangement was “unique” and “highly unusual.”

Edward Rouse, the priests’ oldest nephew and a Marine Corps veteran, called the 15-minute ceremony that included a 21-gun salute “the appropriate rendition of honors for two men who served God and country.”

“We expect our clergy to be heroic,” Rouse said, “and a lot of the time they can’t live up it. These men lived up to it.” 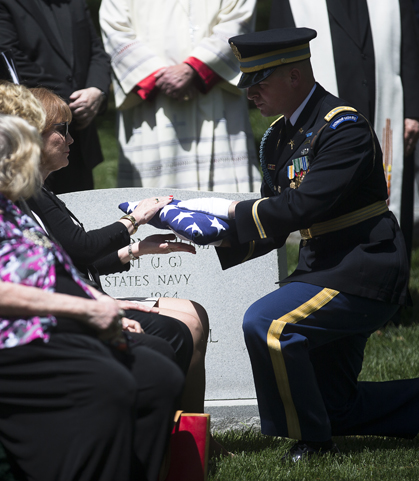 A U.S. Army member presents the U.S. flag to the family of Father Francis Brett during graveside services April 24, 2019, on Chaplains Hill at Arlington National Cemetery. The cremated remains of Father Brett, a priest of the Diocese of Knoxville and longtime Army chaplain, were buried in the same gravesite of his brother, Father Robert Brett, a Navy chaplain who was killed while serving in Vietnam in 1968. The brothers grew up in the Grays Ferry section of Philadelphia. (CNS photo/Tyler Orsburn)

Rouse told CNS that he applied for the burial of “Uncle Frank,” his godfather, in January 2018 after his death a month earlier at age 86 of soft-tissue sarcoma. Cemetery officials approved the request in August and scheduled the ceremony for April 24.

The solemn ceremony began under a blue sky decorated by a few wispy clouds as the United States Army Band marched toward the cemetery’s shaded Chaplains Hill, where dozens of military chaplains of different faiths who served in World War I, World War II, the Korean War and the Vietnam War are buried.

The sound of a single drummer set a somber tone for the procession, which included a horse-drawn caisson carrying the cremated remains of Father Frank.

The band assembled in formation in an open area nearby as the caisson stopped. After several minutes, band members began a rendition of “Holy, Holy, Holy, Lord God Almighty” as members of an honor guard removed the box with Father Frank’s remains and carried it to a table at the foot of the hill.

Other members of the honor guard ceremoniously unfolded an American flag, holding it above Father Frank’s remains as prayers were offered by Father Matthew Whitehead, an Army chaplain, and Augustinian Father Daniel McLaughlin, a family member from Philadelphia.

Bishop Stika followed, offering a few words of reflection describing Father Frank’s commitment to country and to education in the Diocese of Knoxville.

After a closing prayer, the flag was refolded and presented to family member to conclude the ceremony.

Afterward, Bishop Stika told CNS he wanted to attend the ceremony because of Father Frank’s deep connections with the church in Knoxville.

“He taught for a long time at our high school,” the bishop said, ” and he is still remembered with great fondness and affection by so many of the students that he taught.”

Bishop Stika credited Father Frank for designating that his estate would benefit Catholic education in the diocese and enable young people from poor families to attend Catholic school. “So he continues his work in education,” he said.

Father Frank retired as a lieutenant colonel in the Army in 1998 after a 30-year career that found him serving in Okinawa, Texas; Walter Reed Army Medical Center in Washington; Hawaii; Florida; Netherlands; and Germany. He entered the military chaplaincy, following in the footsteps of his younger brother, Father Robert, who voluntarily entered the Navy in 1967 much to the chagrin of his mother. 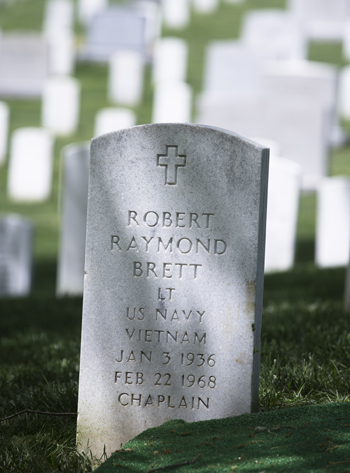 The tombstone of Father Robert Brett is seen April 24, 2019, on Chaplains Hill at Arlington National Cemetery. The cremated remains of his brother, Father Francis Brett of Knoxville, Tenn., a one-time Army chaplain, were buried in the same gravesite following ceremonies at the cemetery. (CNS photo/Tyler Orsburn)

After retiring from the Army, Father Frank returned to Knoxville to minister at a parish.

Rouse earlier told the East Tennessee Catholic, newspaper of the Diocese of Knoxville, that “Uncle Bob” originally was buried at the Marist seminary in Penndel, Pennsylvania, which he had attended, before his body was moved to Arlington in 1998.

Father Robert died in a bunker during the battle of Khe Sanh in February 1968 at age 32 after he turned down a seat on a transport helicopter, allowing a soldier who was carrying mail to go on ahead of him. Rouse said his uncle had decided he would wait for the next transport but that moments after the helicopter left the bunker was attacked. Eight men died when a mortar exploded.

Father Frank was ordained in 1959 at the Cathedral of the Incarnation in Nashville, Tennessee, before settling in East Tennessee to teach at Knoxville Catholic High School. He also served at Sacred Heart and Immaculate Conception parishes in Knoxville and at Our Lady of Fatima Parish in Alcoa and as a hospital chaplain before beginning his military career by being assigned to the battlefield in Vietnam in 1969 and 1970. Leaving the war zone, he was assigned as a chaplain around the world.

Father Robert was ordained in 1963 and began his ministry in Bedford, Ohio. He taught high school for several years but decided to join the Army chaplaincy after hearing of the dangers the troops faced in Vietnam. He graduated from Naval Chaplaincy School and Center in Rhode Island in 1967 and was sent to the battle front.

After his death, Father Robert was posthumously award the Purple Heart and the Legion of Merit. A building at the Rhode Island chaplaincy school is named in his honor. 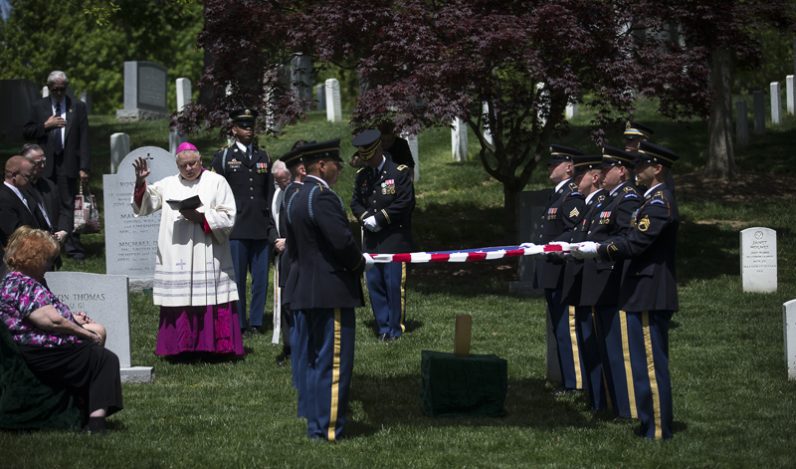 Bishop Richard F. Stika of Knoxville, Tenn., shares a reflection during a graveside service for Father Francis Brett April 24, 2019, on Chaplains Hill at Arlington National Cemetery. The cremated remains of Father Brett, a priest of the Diocese of Knoxville and longtime Army chaplain, were buried in the same gravesite of his brother, Father Robert Brett, a Navy chaplain who was killed while serving in Vietnam in 1968. (CNS photo/Tyler Orsburn)

NEXT: Benefit concert for Notre Dame Cathedral to end with Resurrection piece