Chaput: Look toward church’s future with optimism, not sense of defeat

COLUMBUS, Ohio (CNS) — Philadelphia Archbishop Charles J. Chaput said that although people have good reason to feel anger toward the Catholic Church and fear for its future, those emotions can be viewed as signs of hope, depending on how the church responds to them.

“If our Christian faith really grounds and organizes our lives, then we have no reason to fear and we have every reason to hope,” he said in an evening address March 27 at the Pontifical College Josephinum in Columbus. “Hope depends on faith. It can’t survive without a foundation of passionate belief in something or someone higher and greater than ourselves.

“Without faith, ‘hope’ is just another word for the cheap and cheesy optimism the modern world uses to paper over its own, and our own, brokenness.” 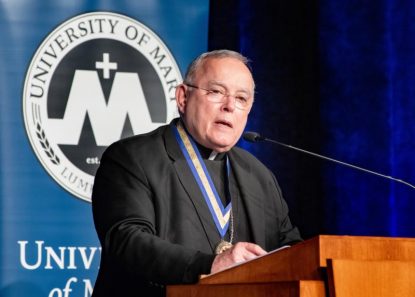 Philadelphia Archbishop Charles J. Chaput delivers the keynote address during the Vocations Jamboree at the University of Mary in Bismarck, N.D., in this March 20, 2019, file photo. (CNS photo/Jerry Anderson, courtesy University of Mary)

The archbishop delivered the seminary’s annual Cardinal Pio Laghi memorial lecture. Cardinal Laghi, who died in 2009, was a former prefect of the Congregation for Catholic Education and apostolic nuncio to several nations.

He said he titled his talk “Facing the Future With Hope and Joy” because “it sounds better than facing the future with confusion and anxiety — and anger, for that matter, because I’m tempted to feel all three of those things a couple of times a week.”

“There are days when everyone in the church seems angry,” Archbishop Chaput said. “Laypeople and priests are angry with their bishops for the abuse scandal, which never seems to end. Bishops are angry with priests for their bad example. And many bishops are also frustrated — to put it gently — with Rome for its unwillingness to acknowledge the real nature and scope of the abuse problem.

“Clerical privilege is not the problem,” he continued. “Clericalism may be a factor in the sexual abuse of minors, but no parent I know — and I hear from a lot of them — sees that as the main issue. Not naming the real problem, for what it is — a pattern of predatory homosexuality and a failure to weed that out from church life — is an act of self-delusion.

“My own frustration over the past few weeks has been fed by German bishops who seem willing to break what remains of church peace and unity with bad ideas about sexual morality and an impressive array of other issues. But that’s a topic for another day,” Archbishop Chaput said.

He was referring to March 14 by Cardinal Reinhard Marx, president of the German bishops’ conference, who said the Catholic Church in Germany was at a point where serious debate — including on priestly celibacy and the role of women — and openness to doing things in a new way must be encouraged.

The archbishop said the two main points he wanted to make were that “much of the anger in the church today is righteous and healthy” and that “Scripture tells us again and again to fear not.”

“I don’t want to diminish that anger because we need it,” he said. “What we do with that anger, though, determines whether it becomes a medicine or a poison. The church has seen corruption, incompetence and cowardice in her leaders, including in her bishops and popes, many times in the past — many more times than most Catholics realize. The fact that Americans are notoriously bad at history and ignorant of its lessons only compounds the problem.

“And yet, here we are. Twenty centuries after the resurrection of Jesus, the church continues her mission. She survives and continues through the grace of God. But that grace works through people like you and me.”

Archbishop Chaput said the great Catholic reformers in history had “three essential qualities: personal humility, a passion for purifying the church, starting with themselves, and a fidelity to her teaching, all motivated by unselfish, self-sacrificing love.”

“God calls all of us, but especially his priests, not just to renew the face of the earth with his spirit, but to renew the heart of the church with our lives, to make her young and healthful again and again so that she shines with his love for the world. That’s our task. That’s our calling. That’s what a vocation is — a calling from God with our name on it.”

Borrowing a phrase from St. Augustine, he told the audience that “God made us to make the times, not the times to make us.”

“We’re the subjects of history, not its objects,” the archbishop said. “And unless we make the times better with the light of Jesus Christ, then the times will make us worse with their darkness.”

Noting that the first words of St. John Paul II upon becoming pope were “Be not afraid,” Archbishop Chaput said, “The temptations to fear, anxiety, depression and fatigue are experiences we all share, especially in hard moments for the church, like today. Fear, like anger, is a good and healthy thing when it’s in its proper place, and toxic when it’s not.

The central question for us is “do we really believe in Jesus Christ or not? … Everything turns on the answer,” he said.

Without God, “the world is just a sandbox for the wicked and the powerful, and there’s never any shortage of either,” he said. “But God is here with us, and because he is, this time of ours, like every other difficult time in history, is a good time to be a Catholic and especially to be a priest, because every priest has the privilege of holding the source of love, the God who made all creation.”

“It doesn’t matter what problems are happening inside or outside the church,” Archbishop Chaput said. “When the Word is proclaimed and the Mass is celebrated, Jesus’ way, his truth and his life become available to us. Whatever the flaws of her leaders and her people, the church is God’s instrument of our salvation.”

Archbishop Chaput said that as Father Joseph Ratzinger, the future Pope Benedict XVI, predicted in 1969, the Catholic Church has become smaller and lost much of its influence. in the coming years.

It is happening now and many of us “are disoriented by the church’s absence from the center of today’s Western culture, especially from elite culture,” the archbishop said. “We’re living in a moment of sifting. Many of our people in the lukewarm middle are leaving the pews. In the past, a shared consensus in favor of Christianity protected the church and encouraged people’s loyalty.”

But in this time “of sifting,” dead weight “is being stripped away.”

“We’re being driven closer to the one simple truth from which the church draws her purpose and strength: God incarnate in Christ, the author of our salvation and life eternal,” Archbishop Chaput said.

“This isn’t a dark time unless we make it so,” Archbishop Chaput said in concluding his talk. “We’re simply back again in the night before the Resurrection. The night passes and we already know how the story ends. … This is a moment of privilege and opportunity, not defeat. Reverence for the past is a good thing, but clinging to structures and assumptions that no longer have life is not.”

“Let’s pray for each other and thank God for each other,” he said, “and lift up our hearts to pursue the mission and create the future that God intends.”

Puet is a reporter at The Catholic Times, newspaper of the Diocese of Columbus.