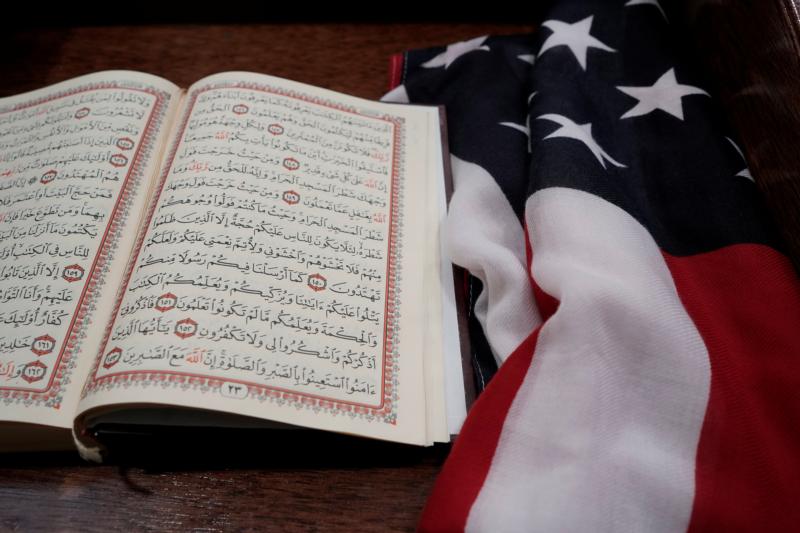 The Quran and and the U.S. flag are seen on the podium before a vigil March 16, 2019, at Dar Al-Hijrah Islamic Center in Falls Church, Va., for victims of the mosque attacks in Christchurch, New Zealand. In an April 4 letter, more than 140 religious leaders, including the chairmen of three U.S. Conference of Catholic Bishops’ committees, urged President Donald Trump and the other U.S. leaders to recognize that “individuals of all faiths and none have equal dignity, worth and rights to religious freedom.” (CNS photo/Sait Serkan Gurbuz, Reuters)

WASHINGTON (CNS) — More than 140 religious leaders, including the chairmen of three U.S. Conference of Catholic Bishops’ committees, called on President Donald Trump, Vice President Mike Pence and congressional leaders to uphold principles of religious freedom following a series of attacks on people of faith, clergy and houses of worship.

In an April 4 letter, the leaders urged Trump and the other U.S. leaders to recognize that “individuals of all faiths and none have equal dignity, worth and rights to religious freedom.”

The letter outlined an additional seven principles, among them affirmation that a person “is not more or less American because of his or her faith,” confirming religious practice without fear of harm, and the unacceptability of “scapegoating, stereotyping and spreading false information” about any person or community.

Among those signing the letter were Archbishop Joseph E. Kurtz of Louisville, Kentucky, Bishop Joseph C. Bambera of Scranton, Pennsylvania, and Archbishop Timothy P. Broglio of the U.S. Archdiocese for the Military Services. They are the chairmen of the committees for Religious Liberty, Ecumenical and Interreligious Affairs, and International Justice and Peace, respectively.

The signers spanned a broad spectrum of political views and included Catholics such as Robert P. George, director of the James Madison Program in American Ideals and Institutions at Princeton University, and Sister Simone Campbell, executive director of the Catholic social justice lobby Network and a member of the Sisters of Social Service.

The letter cited the March 15 shooting attack on two mosques in New Zealand by an alleged white supremacist that resulted in 50 deaths and 50 injuries.

The man charged in the killings, Brenton Tarrant, 28, an Australian, was believed to have posted a lengthy manifesto espousing white supremacist views prior to the attacks. The manifesto expressed anti-Muslim and anti-immigrant sentiments and described Trump as “a symbol of renewed white identity and common purpose.”

The religious leaders’ letter also identified two other incidents since mid-March: a priest being stabbed in a Montreal church and a California mosque that was set on fire and vandalized with graffiti referencing the New Zealand attacks.

“Moreover to our alarm, in the aftermath of the New Zealand attacks we have seen the Jewish community falsely accused as somehow being responsible for those attacks — rhetoric that further endangers that community as well,” the letter said.

Trump initially called the New Zealand shootings a “horrible, horrible thing” and spoke with the country’s prime minister “to express the sorrow of our entire nation.”

Later, in response to a reporter’s question, the president said he did not think white nationalism was a rising threat around the world. “I think it’s a small group of people who have very, very serious problems,” he said.

Trump has remained silent about all the attacks cited in the leaders’ letter since.

The remaining principles the religious leaders called on Trump to affirm include:

— Urging leaders to avoid “using violent imagery” because it can lead to violence.

“We hope you will devote specific remarks to these principles in the days ahead,” the letter concluded. “We vow to work wit you to ensure that individuals and communities are able to practice their faith without fear.”