Man faces charges for trying to walk into cathedral with flammables

NEW YORK (CNS) — A man arrested by New York police after he tried to walk through St. Patrick’s Cathedral in midtown Manhattan with flammables late April 17 has been charged with attempted arson, reckless endangerment and trespassing.

Marc Lamparello, 37, of Hasbrouck Heights, New Jersey, was carrying gas cans, lighter fluid and igniters when he was stopped by security staff at the cathedral. He said he was just cutting through to get to Madison Avenue where he had left his car, which he said had run out of gas.

The security staff told him he couldn’t “proceed into the cathedral carrying (those) things,” a spokesman for the New York Police Department told reporters later in describing the incident.

As the man turned around, “some gasoline apparently spill(ed) out onto the floor,” said Deputy Commissioner of Intelligence and Counterterrorism John Miller of the New York Police Department. This prompted cathedral security to report the situation to officials from the counterterrorism bureau who were standing outside the cathedral, he said.

Officers followed the man, caught up to him, and after questioning him about his reason for being at the cathedral, they arrested him “without incident.” On April 18, he was charged with attempted arson and the two other charges. 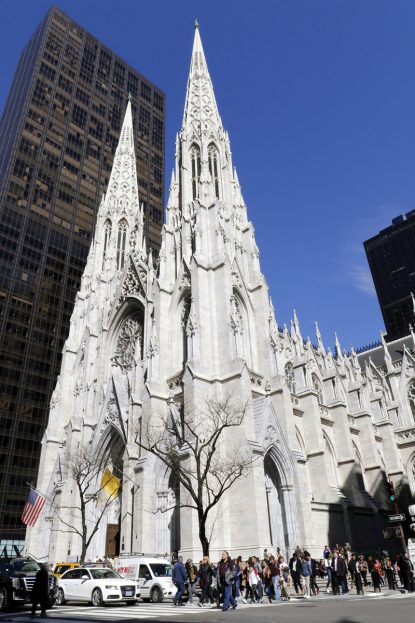 “His basic story was he was cutting through the cathedral to get to Madison Avenue. That his car had run out of gas,” Miller said in a statement to reporters close to midnight April 17. Police said the man had a minivan he parked on the Fifth Avenue outside the cathedral. “We took a look at the vehicle. It was not out of gas, and at that point, he was taken into custody.”

Miller told reporters the man’s story was “inconsistent,” and it was “hard to say exactly what his intentions were” in bringing flammables to the church.

“But the … circumstances of an individual walking into an iconic location like St. Patrick’s Cathedral carrying over four gallons of gasoline, two bottles of lighter fluid and lighters is something that we would have great concern over,” he said.

News reports said that before his arrest in New York, he was arrested April 15 for reportedly refusing to leave the Cathedral Basilica of the Sacred Heart in Newark, New Jersey. There he was charged with trespassing, obstructing the administration of law and resisting arrest. He was due in court in that state May 1.

USA Today, UPI and other news outlets reported April 18 that Lamparello is a graduate of Boston College and is currently a student at City University of New York working on a doctorate in philosophy.

In the spring of 2018, he joined the faculty at Seton Hall University in South Orange, New Jersey, but a spokeswoman told reporters he is no longer on the faculty. Lamparello was an adjunct professor and part-time professor at Lehman College, which is part of City University. He taught online at Lehman starting in the 2018-19 academic year.

St. Patrick’s Cathedral, which is 140 years old, recently underwent an extensive restoration, which included the installation of a new sprinkler system in the attic as part of fire prevention protocols at the cathedral.

Following the Notre Dame fire, officials at U.S. cathedrals and shrines spoke to Catholic News Service about their state-of-the-art fire prevention, detection and suppression techniques. They also emphasized that even with these methods in place, fire firefighters and church staff remain vigilant.

As demonstrated by the April 17 incident with the man bringing flammables to St. Patrick’s Cathedral, security also is integral to fire prevention, even though, as police said, his intentions were unclear.

Beth Griffin contributed to this story.

NEXT: Justices lean toward including citizenship question in next census