Marine vet counts on prayer to reunite with deported husband 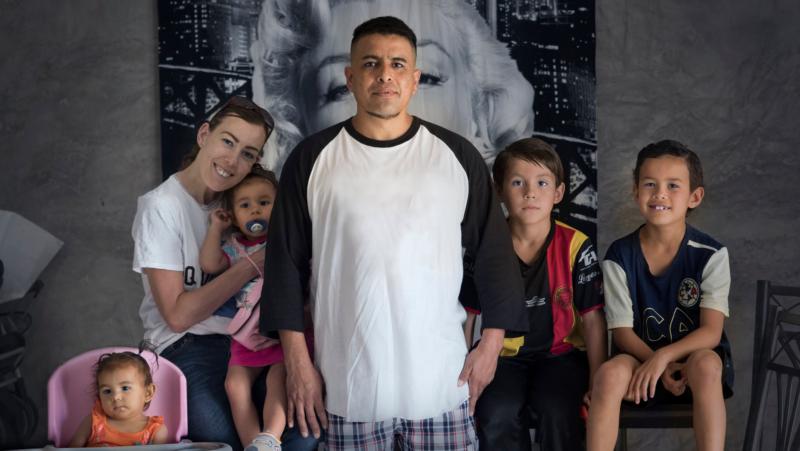 Elizabeth Perez and her husband, Marcos, a Mexican national who was in the U.S. illegally, are pictured with their children, Ellie, front left, Georgia, Pele and Rocky. Elizabeth Perez, a Catholic who spent five years in the Marines and another five in the Ohio Army National Guard, is featured in the new documentary “Marcos Doesn’t Live Here Anymore,” to be seen on PBS stations nationwide 9-11 p.m. EDT April 15, 2019. (CNS photo/PBS)

WASHINGTON (CNS) — In the quest to bring her deported Mexican husband, Marcos, back to the United States to live with her and their four children, Elizabeth Perez has frequently turned to prayer.

Nothing else has worked.

“My faith is the only thing that kept me moving, because I do believe that God has a plan for all of us, and we don’t always know what it is, or why,” said Perez, 40, a Catholic who spent five years in the Marines and another five in the Ohio Army National Guard before that.

“I just have to keep telling myself that everything is just part of his plan, and there’s a reason why,” said Perez, who is featured in the new documentary “Marcos Doesn’t Live Here Anymore,” to be seen on PBS stations nationwide 9-11 p.m. EDT April 15.

Marcos was stopped by police at a yellow light in Cleveland in 2010. Police determined he did not have documents to allow him to stay in the United States legally. On top of that, he had been arrested for two crimes in California, well before he and Elizabeth met. Two weeks after the traffic stop, he was deported to his native Mexico. At the time, Elizabeth was pregnant with their second child.

Marcos was given a “permanent bar,” meaning he could not apply for reentry for 10 years — or 2020, a year from now.

In the documentary, Perez says at one point, “I don’t want it to be nine years.” “I know,” she told Catholic News Service in an April 5 telephone interview from Cleveland. “When I saw that part I thought, like, gosh, that’s nine years now. … Now it’s actually nine years.”

In one scene, Perez goes to a Marian courtyard at St. Anne Church in Cleveland and says before praying the rosary, “Oh, Mary, I don’t know how much more of this I can take.” In another scene, she and dozens of other HOLA Ohio members are shown making a 20-mile trek from Mentor, Ohio, to St. Casimir Church in Cleveland. The church’s story has a particular resonance for Perez.

“We believe miracles happen there” at St. Casimir, Perez told CNS. “When Bishop (Richard G.) Lennon came to Cleveland and closed a lot of churches, that was one of the ones that was closed. A lot of people were upset about it and held their Mass every day outside for three years — in the rain and the cold and the snow.

“The church was actually reopened because they fought for it. It has a big significance with miracles. It’s a Polish church. There’s a big portrait of Our Lady of Czestochowa. It’s the same one that was outside the day it was reopened. It was significant that we did the march there. It was like a pilgrimage to pray for a miracle from the Polish Madonna.”

Through her nine-year effort, Perez has come to some conclusions about the U.S. immigration system.

The system doesn’t work for anyone “if it doesn’t work for us — and not only forget about, like, being a veteran, an American and those things — but all the work that we’ve done and all the people who have sacrificed their time and their energy to get him back,” she said. “You saw the East Cleveland City Council resolution (in the documentary), but we also have other cities. East Cleveland, Toledo. We did the march. We organized groups seeing elected officials, going to D.C., a letter writing campaign — added on top of the fact of who we are — that doesn’t work either.”

Perez added, “I have the privilege to fight for our family openly” without fear of deportation, or having their children taken “and you never see them again, which is what happens.” The problem? “I’m definitely aware that it’s not just a paper problem, like I originally thought. And I’m more aware that it’s a — in my opinion — a racial problem. I think it’s very racially driven.”

Marcos lives in Mexico City, where he referees soccer matches, earning the equivalent of $10 per game. Perez said the low pay levels in Mexico are “just insane.” “People have asked, ‘Why doesn’t he just get a job at Wal-Mart?’ They’ve actually asked that. Those kinds of jobs don’t exist.”

Perez visited him once in Mexico and got pregnant with their third child. After considerable discussion, the whole family later moved to Mexico’s Yucatan state, where she bore him a fourth child. Stress and other issues, though, became too much to bear, so they moved back to their old homes and crossed their fingers for a better result come 2020.

There have been plenty of Skype conversations between Cleveland and Mexico City from the beginning, but “the end of the film is continuing right now. We’re still in the same place,” Perez said. “The hamster wheel that you see in the film is still rolling right now.”