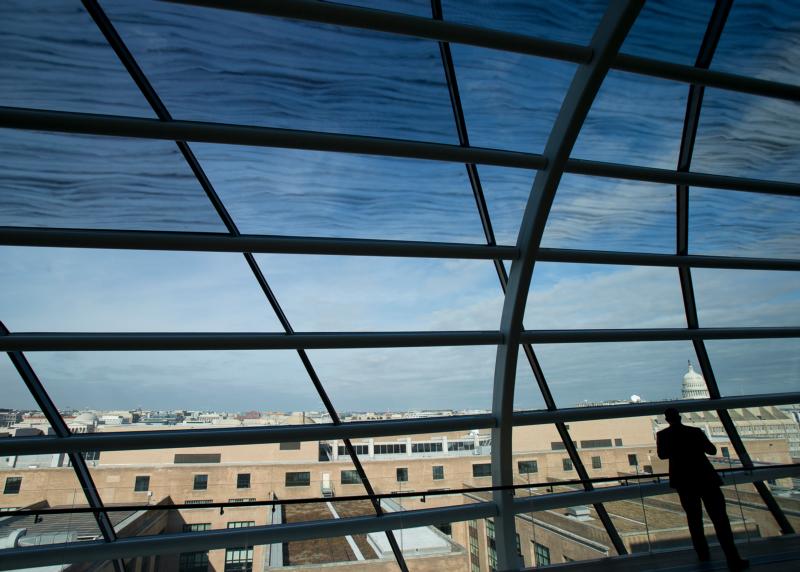 A person admires the U.S. Capitol from the sixth floor of the Museum of the Bible in Washington Nov. 15, 2017. (CNS photo/Tyler Orsburn)

WASHINGTON (CNS) — From the 17th-century ban by the Vatican of Copernicus’ mathematical calculation that the sun was at the center of the solar system to modern-day arguments about evolution’s compatibility with a belief in God, science and faith have regularly butted heads in the public square.

Seeking to illuminate these debates for the public is the Museum of the Bible in Washington, which announced April 1 that it would be using sizable grants from the John Templeton Foundation and the Templeton Religion Trust toward fostering a “greater understanding of the shared curiosity about our world that stimulates both scientific inquiry and biblical interpretation.”

The museum will be working with a panel of scholars and scientists from around the world to develop the exhibits as well as accompanying educational materials for classroom use.

Artifacts from the museum’s collection and those borrowed from other institutions also will play a role in breaking open these mysteries for museum visitors.

“In keeping with the museum’s intent to cater to all learning styles, this exhibition will not only be informative but engaging … we hope guests will leave with a deeper appreciation for humanity’s shared curiosity in the big questions that ultimately inspire both scientific inquiry and biblical exploration,” Ken McKenzie, Museum of the Bible president and CEO, said in a statement.

The exhibits will be divided among six sections, each of which will be devoted to pressing existential questions about the beginning of the universe, what keeps it running, how humans and animals differ, what humans “are made of” and if humanity is alone in the universe.

McKenzie told Catholic News Service that the answers to such questions would bolster conversations on two oft-ignored aspects of science, specifically “what … science mean(s) for the existence and activity of God” and what science means for the “sacredness of humanity.”

He also noted that the decision to have such an exhibit emerged because people are beginning to view science and religion as a false dichotomy of thought.

“As we look at what some of the topics guests ask us about … science keeps coming up,” McKenzie explained, saying that “(especially) within the North American community, the conversations happen apart from each other.”

However, McKenzie and his colleagues studied the issues more closely and found that the public is not always fairly informed. “We started to find a lot of work that has been done in the scientific community brings them (science and the Bible) together,” he said.

When asked if he hopes that other museums will follow in the interdisciplinary footsteps of the Museum of the Bible, McKenzie seemed optimistic.

“Personally my answer is yes. … We hope that it engenders a debate and a discussion … about the myths that have surrounded these two topics,” McKenzie said.