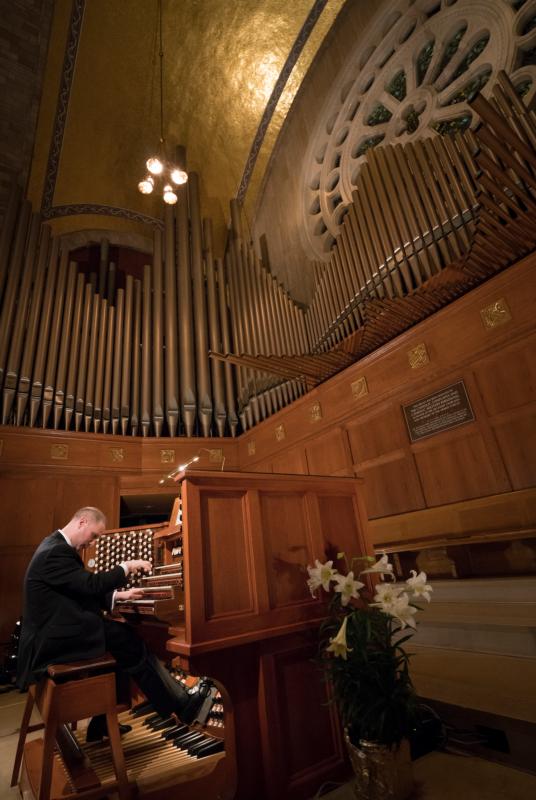 Organist Johann Vexo of Paris performs during a benefit concert April 26, 2019, at the Basilica of the National Shrine of the Immaculate Conception in Washington.  (CNS photo/Jose de Jesus Cortes, Reuters)

WASHINGTON (CNS) — More than 2,000 people attended an April 26 organ concert at the Basilica of the National Shrine of the Immaculate Conception in Washington to benefit restoration and rebuilding efforts of Notre Dame de Paris, the famous French cathedral severely damaged in the April 15 fire.

The 90-minute concert was performed by Johann Vexo, a Notre Dame organist who was playing at the time the devastating fire broke out at the cathedral. Titled “Together with Notre Dame de Paris,” the concert was broadcast on the Eternal Word Television Network and streamed on the internet.

“This concert brings us in solidarity with that great church, which is a symbol or faith, a symbol of peace and a symbol of God’s presence among us,” said Cardinal Donald W. Wuerl, apostolic administrator of the Archdiocese of Washington, who noted “we all remember with horror the sight of Notre Dame Cathedral in flames.”

Vexo said the program for the concert was planned “in a way that makes sense.” The concert’s first piece was Johann Sebastian Bach’s dramatic “Aus tiefer Not schrei ich zu dir,” (“Out of Deep Anguish I Call to You”), a sweeping organ cantata meant to symbolize distress and sorrow.

“This dramatic music demonstrates what we feel,” Vexo explained to reporters the day before the concert.

The concert also featured works by French composers Cesar Franck, Jean L’Heritier and Louis Verne, who served as organist at Notre Dame in the early 1900s. Also included was a piece by 15th century English composer John Taverner and several antiphons performed by the basilica’s choir.

The concert ended with “Resurrection” from “Symphonie-Passion, Op. 23” by Marcel Dupre.

The concert “displays an artistic progression from grief to prayer to hope,” said Peter Latona, director of music at the basilica, adding that it was “fitting we pay tribute to Notre Dame with music in a sacred setting.”

Among those attending the concert were Archbishop Christophe Pierre, the papal nuncio to the United States; Ben Carson, the U.S. Secretary of Housing and Urban Development; Callista Gingrich, the U.S. ambassador to the Vatican, former Speaker of the House Newt Gingrich; and members of the diplomatic corps.

Prior to the concert, Vexo recalled how he was playing the organ for daily Mass at the Paris cathedral when fire alarms began sounding. “I switched the organ off and went to the sacristy, the priest was still there,” Vexo recalled. “At first no one was worried. We thought it was just a dysfunction or a mistake because the alarm stopped, but then it started again.”

Vexo escaped the cathedral and stood with others who had gathered nearby to watch firefighters battle the blaze. As the church was burning, they sang and prayed and watched as flames destroyed the church roof and caused its iconic spire to crumble.

“I was totally devastated by this absolutely terrible fire,” Vexo said. “It was really something I couldn’t imagine. I spent hours and hours, days, nights there. Sometimes I spent more time at the cathedral than I did in my own apartment.”

“The people who work at the cathedral have a special relationship with the place,” he said. “It was like a second home to me, and as a matter of fact, I have keys to the cathedral.”

Eventually, more than 400 firefighters spent more than 15 hours to put the fire out. Destroyed by the fire were the cathedral’s main roof, steeple, statues of saints, its choir loft, and nave. There was also extensive smoke and water damage.

Firefighters were able to save the cathedral’s famous 13th century stained glass rose windows; relics believed to be Jesus’ crown of thorns, one of the nails from his crucifixion and a piece of wood from the cross; other important artworks and treasures, and the cathedral’s great organ.

Vexo said he was relieved when he discovered the cathedral’s famous organ survived the fire. The largest organ in France, it has 8,000 pipes and five keyboards. It was built in the 15th century and restored in the 18th century.

“This is a very important instrument historically, and it is a great instrument with a lot of power,” Vexo said. “Thankfully there were no burns and no water damage, but it does have to be cleaned because there is now a lot of dust inside.”

He added that organ music “is an important part of worship. I think you cannot have services without music — it is important to the liturgy, to the clergy and to the people.”

The organist also expressed his gratitude for the generosity of so many around the world who want to donate to help rebuild and restore the cathedral.

“The cathedral is very important to so many people — 40 million visit each year,” he said. “I know that everyone was really touched by this fire.”

Earlier, Cardinal Wuerl had announced that the archdiocese had donated $25,000 to support the rebuilding effort for the renowned cathedral.

In addition to organizing the concert, the basilica launched the website — http://www.SupportNotreDame.org — a special online collection to support Notre Dame’s restoration.

Nathalie Broadhust, the charge d’affaires of the Embassy of France in the United States, said she was “very delighted, very honored and very moved” by the concert.

Noting that “Notre Dame belongs to humanity,” she said she was thankful that “here in the U.S., generosity and many acts of friendship have been directed at France in this difficult time. I thank you for your generosity, for your friendship and for your support.”

At the end of the concert, Vexo was rewarded with a two-minute standing ovation. After the concert, he made his way to the front of the basilica where he greeted concert goers and signed autographs.

NEXT: 120 names on New York archdiocesan list of accused clergy