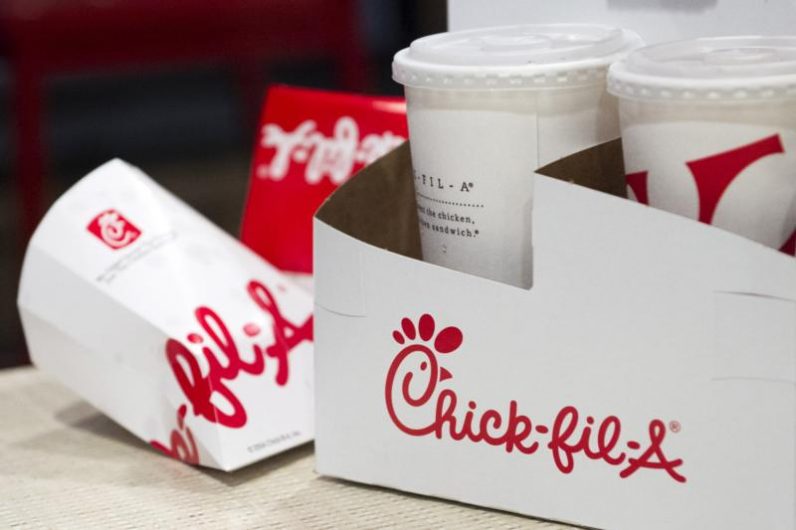 Drink and sandwich containers are seen on a customer’s table at a New York City Chick-fil-A restaurant Oct. 3, 2015. The archbishop of San Antonio has said to “let the marketplace decide,” following his city’s decision to ban a Chick-fil-A outlet at San Antonio’s airport over its stand on traditional marriage. (CNS photo/Rashid Umar, Reuters)

SAN ANTONIO (CNS) — The marketplace should decide whether a company should open an outlet in a particular location, not elected officials, said San Antonio Archbishop Gustavo Garcia-Siller.

In a March 27 statement, he said he has been asked what he thinks of the San Antonio City Council’s 6-4 vote March 21 “to exclude Chick-fil-A from the list of concessionaires that could operate at San Antonio International Airport” because the company is known for its support of traditional marriage.

“It is best in this circumstance that elected officials not restrict a restaurant chain’s right to conduct business,” Archbishop Garcia-Siller said. “Let the marketplace decide, and consumers will select which businesses to support — or not support — with their dollars, as they always do.”

He said the issue reminded him of a statement made in July 2012 “by my beloved former prelate, Cardinal Francis George of Chicago,” over the same issue: An alderman, with the Chicago mayor’s support, said he would deny Chick-fil-A a permit to build a location in a section of the city he represented.

“Recent comments by those who administer our city seem to assume that the city government can decide for everyone what are the ‘values’ that must be held by citizens of Chicago,” Cardinal George said at the time. “My understanding of being a Chicagoan never included submitting my value system to the government for approval. Must those whose personal values do not conform to those of the government of the day move from the city?”

In Texas, supporters of the City Council vote also claim the Chick-fil-A owners discriminate against the LGBT community. Still others criticize the company for being closed on Sundays to allow employees to go to church if they choose.

In late March, the Buffalo Niagara International Airport decided not to go through with plans to add a Chick-fil-A location to its food court. News reports said this came after a New York state lawmaker raised concerns over the company’s charitable giving to conservative organizations such as the Salvation Army and the Fellowship of Christian Athletes.

A spokesperson for the company issued a statement to a local Buffalo TV station stating that the company has no policy to discriminate against LGBT people.

“Recent coverage about Chick-fil-A continues to drive an inaccurate narrative about our brand. We do not have a political or social agenda or discriminate against any group,” said the spokesperson. “More than 145,000 people from different backgrounds and beliefs represent the Chick-fil-A brand. We embrace all people, regardless of religion, race, gender, ethnicity, sexual orientation or gender identity.”

In his statement, Archbishop Garcia-Siller said: “Comments by some after the vote stated that the action was taken to reaffirm that San Antonio was a ‘city of compassion.’ San Antonio is truly a compassionate city that always comes together in mutual respect, especially in challenging times, recognizing the God-given dignity of every individual. This is what a family does.”

“There were also comments that Chick-fil-A was rejected from the airport contract because their restaurants are not open for business on Sundays,” the archbishop added. “However, many people admire the company because they do close on Sundays, saying corporately they take that stance in order to provide their employees a day to rest with their families and worship if they choose.”

Texas Attorney General Ken Paxton said he was investigating the city of San Antonio for potential First Amendment violations in the action to deny a spot in the airport concession area to the national restaurant chain.

NEXT: Jesuit: Without the Amazon, ‘we all go under’