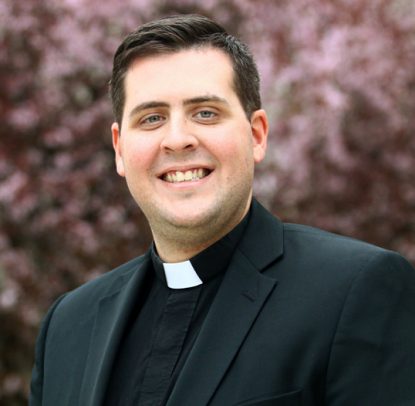 Deacon Alexander Pancoast will be ordained a priest May 18 for the Archdiocese of Philadelphia. (Photo by Sarah Webb)

Fifth in a series of profiles on the seven men to be ordained priests for the Archdiocese of Philadelphia on May 18.

When Alexander Pancoast was maybe 2 or 3 years old, he was sitting at Mass with his mom in St. Ephrem Church in Bensalem talking under his breath to himself. “Alex, what are you doing, why are you mumbling?” his mother asked.  “When I get big, I want to be that,” he told her, pointing to the priest.

He doesn’t remember that story of course but his mother told him so, and moms usually have good memories.

Something told to one’s mother as a toddler would not be a good reason to ultimately become a priest. But indeed there was something to it, and through Alex’s early childhood he kept this ambition alive.

The eldest of the two children of William and Donna Pancoast, his mother was Catholic, but his father was not. The family did attend church together and said grace before meals and his mother taught CCD, the things active Catholic families usually do.

Alex recalls when he was 10 his dad asked if he still wanted to be a priest and when he said yes, his father confided to him that he was considering becoming Catholic, which he did.

It helped too that Father Timothy O’Sullivan, a parochial vicar at St. Ephrem who was in charge of the youth programs, was a fun guy who could joke with the kids. He was a great role model, the kind of person they could relate to.

For his elementary grades Alex attended school at St. Ephrem. But when it came time for high school at his own choice he opted for Bucks County Technical School, which in addition to trades, has a surprisingly good academic program.

He enrolled in the culinary arts program and the one definite thing he learned was that he didn’t want to be a chef. On the other hand, being a people person, he enjoyed waitering. He dated a couple of girls semi-seriously and was active with the Boy Scouts, rising to Eagle Scout.

It was in his sophomore year when he went through a spiritual crisis. “I had a car, I had a little job, I had a girlfriend. I had everything in life that should make me happy, but I wasn’t,” Alex remembers.

He continued going to church and praying with the family, but secretly stopped believing in God, telling no one. His epiphany took the form of metaphor. He was canoeing with Boy Scout friends, and they passed through a large stand of willow trees so dense it blocked the light.

As they paddled out into the brilliant sunlight his heart was filled with joy. In the midst of such magnificence, “Something clicked,” he said. He could only think, “God created me, God loves me.”

In his senior year of high school Alex applied to St. Charles Borromeo Seminary and as backup to La Salle University, which offered him a $40,000 scholarship. He turned that down when he was accepted by St. Charles.

“I never lived with so many people in my life,” Alex remembers. “I was nervous, coming from public school and everyone else coming from Catholic school or home schooling. They probably knew Latin and a lot of things I didn’t know.”

He soon discovered most of the seminarians had the same trepidations he had, and most of them had never studied Latin either.

The hardest thing for him was three of his closest friends, whom he met in pre-seminary days on Quo Vadis vocation retreats, one by one determined the priesthood was not what God planned for them and left the seminary.

More than once he was on the verge of giving up too, but always something, perhaps a great retreat experience, would bring him back.

This past year he has been serving as a transitional deacon at St. Bede the Venerable Parish in Holland where Msgr. John Marine has been another great priestly role model.

On May 19, the day after his ordination by Archbishop Charles Chaput, Alex will celebrate his first Mass at St. Ephrem. In the first pew there will be his mother, remembering what her little boy murmured almost a quarter-century ago. 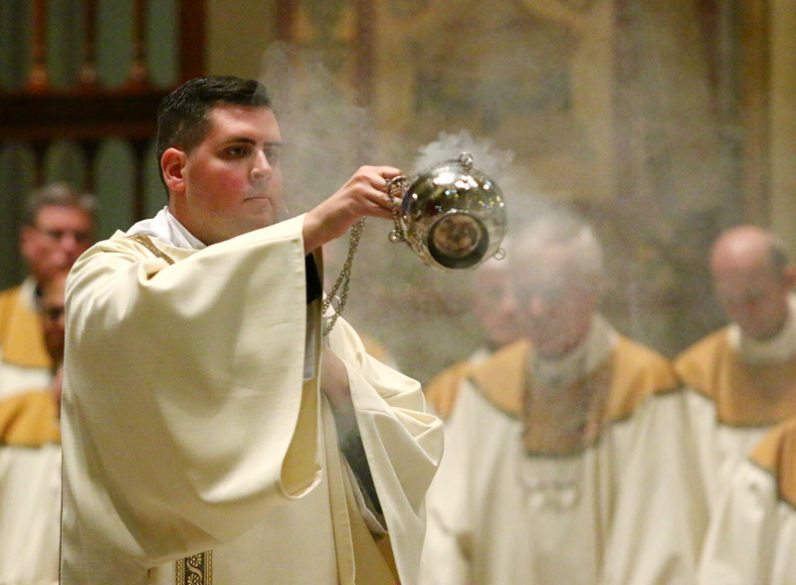 Deacon Alexander Pancoast incenses the people during a Mass at the Cathedral Basilica of SS. Peter and Paul, where he will be ordained a priest on May 18. (Photo by Sarah Webb)

PREVIOUS: Love of family, influence of priests leads him to ordination

NEXT: After college at Steubenville, his path opened to priesthood