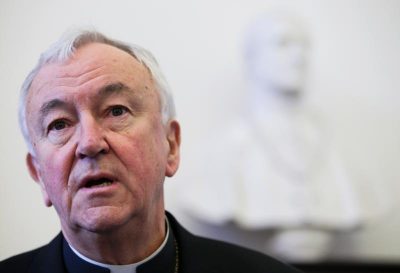 Cardinal Vincent Nichols of Westminster, England, is pictured in a Feb. 24, 2014, photo. Cardinal Nichols has urged young people to abandon gangs and to stop carrying knives in an attempt to help end an epidemic of stabbings in the U.K. (CNS photo/Max Rossi, Reuters)

MANCHESTER, England (CNS) — An English cardinal has called on young people to get rid of their knives in an attempt to stem an epidemic of violence sweeping the U.K.

Cardinal Vincent Nichols of Westminster also urged young people to abandon gangs and to turn to Christ instead.

“If you or your friends are involved in gangs, try to find a way out,” Cardinal Nichols said in an April 6 audio message posted on the website of the Archdiocese of Westminster.

“If you or your friends carry or possess knives, go to one of the banks and anonymously get rid of the knife in your possession, just get rid of it,” he said. “It doesn’t make you safer, it puts you at risk of being provoked into using it, and not only will you cause harm to somebody else, you’ll damage your own life.”

The archdiocese operates two knife banks where people can dispose of their weapons anonymously.

“Build friendships, find places where you can go and sit and honestly talk and share your experiences with other people,” the cardinal said. “Say your prayers, turn to God, turn to Christ and let your life grow from that relationship with Jesus rather than from anywhere else.”

He made his remarks after he joined other faith leaders for the “Standing Together” rally against knife crime, April 6 in London’s Trafalgar Square.

Families and communities hurt by knife crime organized the rally in an attempt to combat the worst peak in knife crime since 1946, the year that data on such types of offenses began to be collated.

The Office for National Statistics revealed that over the 12 months that ended in March 2019, there were 285 “knife and sharp instrument homicides,” exceeding the previous peak of 268 in 2008.

About 40 percent of the killings were in London, much of which is covered by the Westminster Archdiocese. The majority of the victims were white males, ages 16-24.

Cardinal Nichols said Catholic parishes and schools also are working to address the violence, which, he said, always involved a “breakdown of relationships,” often made worse by gang and drug culture and sometimes by mental illness.

He said worried parents must keep talking to their children, adding that “the only way of counteracting a gang culture is to create for young people a sense of belonging to something else — something that’s positive, creative and attractive to them.”

“I had a request from a priest this week who’s looking to start a boxing club in his parish,” he added. “This is the kind of reaction we need, to involve young people in a way that calls out their commitment and helps them to build discipline and self-control in their lives, and that’s the best counter to some of the worst influences today.”