Australia sees drop in Catholic population of 2.7% since 2011 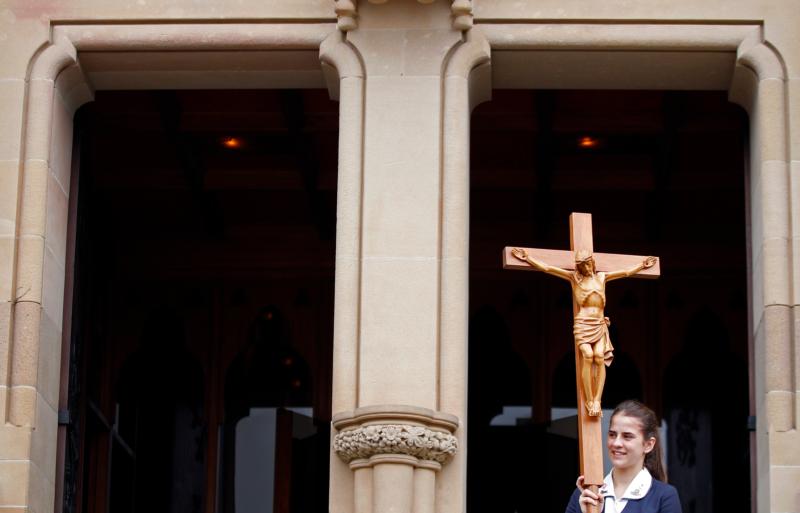 A young woman leaves St. Mary’s Cathedral after a Mass in Sydney Feb. 12, 2013. Australia’s Catholic population fell by 2.7% between 2011 and 2016, but Catholics are more likely to have a higher education, according to an analysis of census data by the National Center for Pastoral Research. (CNS photo/Daniel Munoz, Reuters)

CANBERRA, Australia (CNS) — Australia’s Catholic population fell by 2.7% between 2011 and 2016, but Catholics are more likely to have a higher education, according to an analysis of census data by the National Center for Pastoral Research.

Analyzing statistics from the country’s 2016 census, the center reported April 4 in its “Social Profile of the Catholic Community in Australia” that members of the church also were more likely to have been born overseas than five years earlier.

“The drop in the number of Catholics is concerning and the bishops are keen to understand what’s behind it and respond as positively as possible,” Archbishop Mark Coleridge of Brisbane, president of the Australian bishops’ conference, said in a media release.

He also pointed to recent data on falling Mass attendance, surmising that government inquiries and “related revelations about child sexual abuse as well as a general drift away from religious practice and a broader trend of disaffiliation” have contributed to reducing the Australia’s Catholic population.

The report also showed that Catholics are more than twice as likely to have a university degree than two decades ago. The trend, the archbishop said, “may show how Catholic schools have better equipped people” for advanced study.

Census data revealed that the percentage of Catholics in the total population was the highest among people claiming any religious affiliation. The number of people claiming no religion in the 2016 data stood at 30.1 percent, however.

The report said such factors will guide planning in ministry development to ensure that people are not excluded from various aspects of parish life.

“All of this is important data as we plan for a very different future, given that any effective planning needs to be based on fact, not fantasy,” Archbishop Coleridge said.