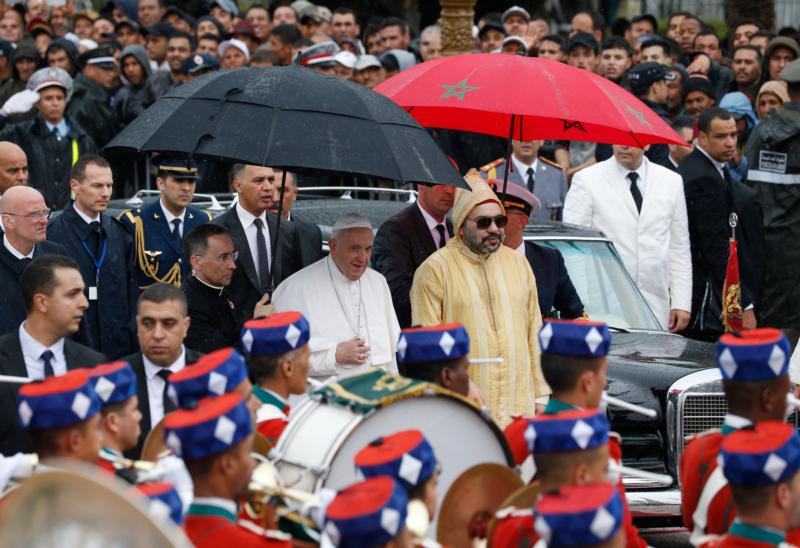 Pope Francis attends a welcoming ceremony with King Mohammed VI of Morocco in the square outside the Royal Palace in Rabat March 30, 2019. (CNS photo/Paul Haring)

In a sign of great honor, the king rode in his limousine from the airport alongside Pope Francis riding in the popemobile. They went directly to the Hassan Tower, a 12th-century minaret that is a symbol of the city.

(See a photo gallery of the Pope’s trip to Morocco.)

With thousands of people gathered on the esplanade in front of the tower, which sits where the Bouregreg Rivers meets the Atlantic Ocean, the pope and the king spoke of peace, tolerance, respect and religious freedom in a country where 99 percent of the people are Muslim, but tens of thousands of Christian students and migrants live temporarily.

The king, who has the constitutionally assigned role of “commander of the faithful,” told Pope Francis that role includes being “guarantor of the free practice of religion” for Muslims, Christians and Jews.

The king, who has devoted energy and resources to training imams and other leaders and to fighting fundamentalist forms of Islam, told the pope, “What all terrorists have in common is not religion, but rather ignorance of religion.”

Pope Francis described his visit as another occasion to promote interreligious dialogue as part of the celebrations of the 800th anniversary of the meeting of St. Francis of Assisi and Sultan al-Malik al-Kamil in Egypt.

The meeting of the saint and sultan during the Crusades, he said, “shows that the courage to encounter one another and extend a hand of friendship is a pathway of peace and harmony for humanity, whereas extremism and hatred cause division and destruction.”

Dialogue, he said, is the only sure way “to halt the misuse of religion to incite hatred, violence, extremism and blind fanaticism and the invocation of the name of God to justify acts of murder, exile, terrorism and oppression.”

Religion is not just about an individual’s relationship with God and eventual hope of heaven, he said. All religions teach the sacredness of human life and anyone who claims faith in God must demonstrate that through the highest level of respect for the life and dignity of others.

Respect for life and for all God’s gifts also implies respect for creation and caring for the poor and for migrants, the pope said. Christians and Muslims can and should work together to protect the planet and assist those in need.

Pope Francis also urged further steps in Muslim-majority countries to progress beyond seeing Christians and Jews — “people of the book” — as minorities to protect and instead recognize them as full citizens with equal rights and obligations.

PREVIOUS: In Jesus’ heart, the sinner is more important than the sin, pope says