Hope from the ashes: Leaders vow to rebuild Notre Dame 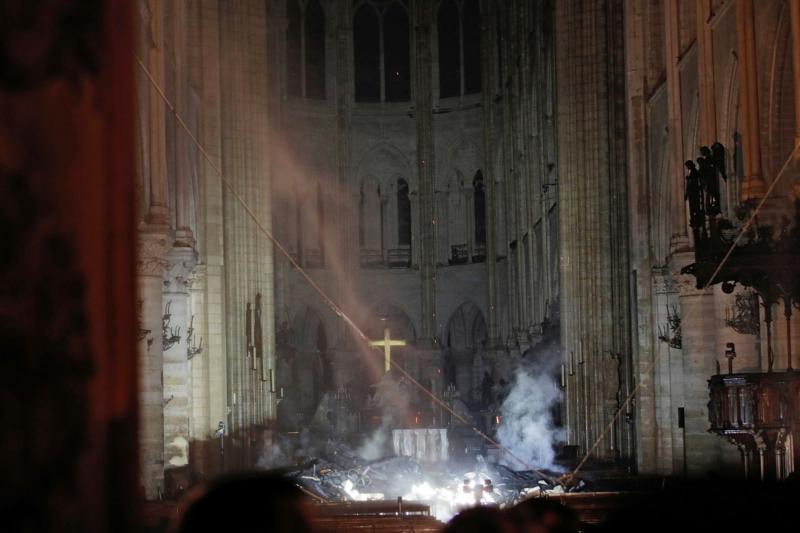 Smoke rises around the altar inside Notre Dame Cathedral in Paris as a fire continues to smolder early April 16, 2019. Officials said the cause was not clear, but that the fire could be linked to renovation work. (CNS photo/Philippe Wojazer, Reuters)

ROME (CNS) — The president of France and the archbishop of Paris have vowed to rebuild Notre Dame Cathedral after a devastating fire, continuing what a professor of architecture described as the natural lifecycle of a historic building.

Steven W. Semes, a professor and director of graduate studies in the Historic Preservation Program at the University of Notre Dame in Indiana, said he was as shocked and pained as everyone watching on television as the building burned April 15.

“Like all historic monuments,” he said, Notre Dame Cathedral is “the result of hundreds and hundreds of years of development” with an initial idea, a long and labor-intensive construction process, design changes, additions, demolitions and remodeling over and over again as fashions and usages change.

So, from the initial construction, which began in 1160, the cathedral “was transformed multiple times,” he told Catholic News Service in Rome, where he regularly teaches. When one looked at Notre Dame before the fire, “we weren’t seeing the cathedral as it was built, we were seeing it through layers of change.”

“Buildings and cities do change through time,” Semes said. “We wouldn’t go see a painting by Rembrandt that four people had painted over, but we look at almost any historic building and we see something that has been restored multiple times — sometimes restored in a way very faithful to an early state and sometimes not.”

“One thing about buildings and cities is that they are more like natural phenomena than other art works. Think of a forest. You can have a fire in a forest, but then it comes to life again,” he said. “Buildings are resilient.”

“Hope springs from seeing monuments that have endured,” even though they almost never remain unchanged, Semes said.

“A lot of people are feeling today, ‘We can’t do it again’ or ‘It can’t be restored,'” and while that would be true of a painting, the professor said, “we do have the skills to restore this building.”

“Obviously, a big fire has a big impact,” he said, but even for nonbelievers, there is a sensitivity to the fact that Notre Dame Cathedral was not just a treasure of Gothic architecture.

“Notre Dame was truly a work of devotion,” he said. “Think about it — how large the building was compared to everything else in the city, the attention, the loving care that went into making it, ornamenting it and maintaining it. This is truly an act of devotion; it is a kind of sacramental.”

The building as a church “speaks to people,” whether they are believers, he said, pointing to similar reactions in 2015 when a massive earthquake in Nepal toppled Buddhist statues and monuments. “We feel these things even if we are not personally involved in that particular tradition.”

The key to understanding Notre Dame Cathedral was summarized by Paris Archbishop Michel Aupetit in a television interview in the wee hours of April 16: “Why was this beauty built? What jewel was this case meant to contain? Not the crown of thorns (a relic saved from the fire), but a piece of bread that we believe is the body of Christ.”

Pope Francis, in a message April 16 to Archbishop Aupetit, expressed his solidarity with the sadness of Parisians, calling Notre Dame “an architectural jewel of a collective memory, the gathering place for many major events, the witness of the faith and prayer of Catholics in the city.”

The pope also expressed his confidence that the cathedral would be rebuilt and continue its vocation as “a sign of the faith of those who built it, the mother church of your diocese, (and) the architectural and spiritual heritage of Paris, France and humanity.”

In Philadelphia, Archbishop Charles J. Chaput said in a statement April 15 that the “ongoing destruction being wrought by flames is doubly sorrowful as it comes during the holiest week of the Christian calendar.

“I ask the clergy, religious, and lay faithful of the Archdiocese of Philadelphia to join me in prayer to the Blessed Mother for the protection of fire personnel and first responders in Paris working to battle the blaze and provide for the safety of the community. We also pray that our Lord will bring comfort and peace to Archbishop Michael Aupetit as well as our brothers and sisters in the Archdiocese of Paris, and the people of France at this time.

“In the face of desolation and devastation, we find hope in the Resurrection.”

Antoine-Marie Izoard, editor of the French Catholic magazine Famille Chretienne, told CNS, “That this happened at the beginning of Holy Week makes it even more striking and calls us to Christian hope.”

“Last night, Catholics, members of other religions and nonbelievers united around this strong symbol in the heart of Paris,” he said April 16. “It was very striking to see Catholics praying around the cathedral for the firefighters battling the flames.”

Add to that French President Emmanuel Macron’s determination to rebuild, he said, and “we realize once again that the Christian roots of the country are still at the heart of France.”

Italian Cardinal Gianfranco Ravasi, president of the Pontifical Council for Culture, told reporters April 16 that while Notre Dame, like other French cathedrals, is state property, “it remains a living creature in which the liturgy is celebrated, encounters of faith occur and even nonbelievers enter to make a tour of beauty.”

The prayerful, tearful public vigils that took place as the fire burned, he said, demonstrated how “the great cathedrals and basilicas really are living bodies.”

And, the cardinal said, Notre Dame is not just a living sign of religiosity, but is “the heart, the beating heart” of Paris.