Pan-yard retreats in Trinidad take the church to the people 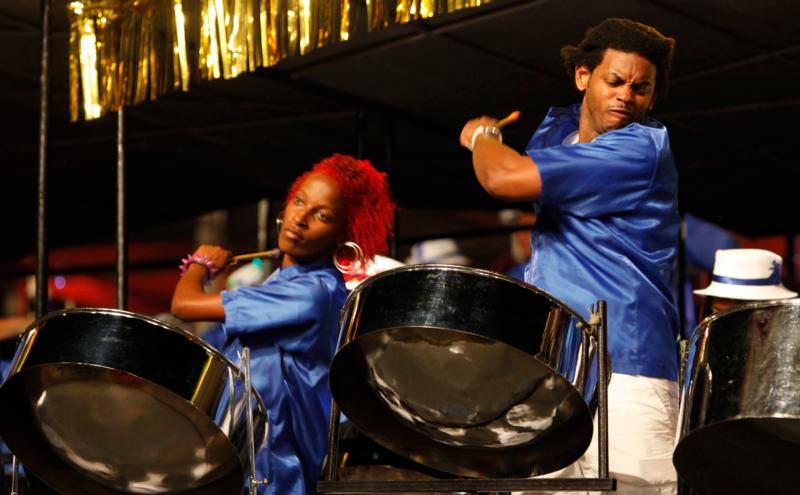 Steelpan players perform with their band during the National Panorama finals at the Queen’s Park Savannah in Port-of-Spain, Trinidad, in this 2012 file photo. The steelpan was invented during the 1940s in the hills of Laventille, an impoverished Port of Spain neighborhood. (CNS photo/Andrea De Silva, Reuters)

PORT-OF-SPAIN, Trinidad (CNS) — Sixteen years ago, surrounded by burgeoning crime and gang violence, a Port-of-Spain parish decided to take that year’s Lenten retreat outside of the church walls into a nearby pan-yard.

Back then, Trinidad Archbishop Charles Jason Gordon was parish priest of Holy Rosary Church. He kept regular dialogue with the area’s gang leaders, trying to broker peace and create opportunities for a life without crime for their members. Now archbishop of Port-of-Spain, he sees the need for the church to continue to be an active presence in difficult times.

“When the retreats started, the whole idea was to move the church out into the communities,” said Archbishop Gordon. “It is really an understanding that the pan is so deeply (engrained) into our culture, the church has to become so deeply part and entwined with the culture that this is the most natural place to have a crusade and to proclaim Jesus Christ. Because, this is the heart of so much of our culture in Trinidad and Tobago that, certainly, in the Afro-Trinidadian culture, this is really one of the holy places.”

The steelpan was invented during the 1940s in the hills of Laventille, an impoverished Port-of-Spain neighborhood. The thriving local oil industry made oil drums widely available as garbage bins and, through a process of firing and blows, those bins were transformed into the only instrument invented in the 20th century.

Whole steel orchestras, some of more than a hundred members, sprang up largely within similarly depressed communities, giving rise to its stigma as a breeding ground for delinquency. Violent clashes, which were common among steel bands during Carnival celebrations, did little to dispel it.

Later, clashes diminished and pannists — those who play the steelpan — came from a variety of ethnic, economic and religious backgrounds. Corporate sponsorship kept the bands alive, yet, although nontraditional instruments such as the acoustic guitar were allowed to play liturgical music in churches, the pan was not heard there until the 1970s.

“Each year, when we come to the pan-yard in Lent, it’s a reminder that we were on the wrong side of history in the beginning in not wanting the pan in the church,” said Archbishop Gordon. “Now, we’ve come full circle; we’re not just having pan in the church, but, we want to come (to) the home of the pan.

“I think that is such a powerful symbol for church — that we are no longer caught in our four walls but, we’re going to go everywhere in our society and be the presence of Jesus and proclaim that presence in loud ways and in song and in music,” he added.

This year, the Holy Rosary Church Lenten retreats were held in mid-March at the Trinidad All Stars, Renegades and Desperadoes pan-yards, respectively. Each night, more than 400 people assembled from all over the country, with more listeners in the high-rise apartments and hidden barrack-yards nearby.

“It really regenerated and revitalized the interest by the amount of music being played in church — church music being played by pan,” she said. “And, this was an opening for them to bring a connection between the pan people and (church people).”

In 2003, the parish first approached the Trinidad All Stars and held a retreat in their pan-yard. For years, the All Stars had celebrated their anniversary on the feast of the Epiphany with Mass at Holy Rosary.

The following year, Renegades invited the parish to hold the retreats at their space around the corner from the church and, by 2005, Desperadoes in Laventille welcomed the ministry, as well.

In those days, no one could venture into Laventille without police protection. The parish arranged both that and shuttle services up to the pan-yard’s hillside location. However, assured by the police presence, many ventured up on foot.

“In droves!” recalled Archbishop Gordon. “People went up that hill crying, because they had not been up the hill for years before. And, it was one of the most amazing nights!”

However, intensified violence over the years eventually forced Desperadoes — fondly called “Despers” — out of Laventille in 2009. Several moves and nearly eight years later, they settled into a pan theater in a semi-commercial district in west Port of Spain, where one of this year’s retreats was held.

“To come tonight and have Despers no longer up the hill, but down here in the midst of the city, is really a symbol of where the society is,” said the archbishop, who preached at the retreat. “Because, if Despers can’t be in the home of Despers, that says something about the dislocation of the whole society. And, it is that dislocation that we have to mourn, and that’s what we have to heal.”

NEXT: A perfect fit: Pope describes how to discover one’s vocation