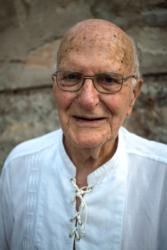 Spanish Jesuit Francisco de Paula Oliva, 90, an icon of the struggle for the poor and social rights, is pictured in a March 14, 2018, photo in Asuncion, Paraguay. (CNS photo/Santi Carneri)

ASUNCION, Paraguay (CNS) — It does not matter if it is in a demonstration against the International Monetary Fund or to support a small displaced indigenous community, Spanish Jesuit Francisco de Paula Oliva, 90, will be there.

Dressed in white shirt, glasses, sandals and cane, he will arrive at some point, and the protesters in any place of Paraguay will automatically feel safer, as when the magician Gandalf appears in the battles of “The Lord of the Rings.”

Father Oliva is an emblem of the daily struggle for social equality, a show of coherence between action and discourse. Many Paraguayans use the Guarani word for Father and refer to him as Pa’i Oliva.

The Senate of Paraguay honored him recently for “his invaluable contribution to Paraguayan and Latin American society” in defense of democracy. The Senate also highlighted his work in Paraguay in favor of “the ethical formation of youth, the defense of democracy, human rights, the promotion of free expression and critical thinking.”

“The work of Oliva in favor of young people to open their eyes and to think with their own criteria and have a human commitment to society earned him expulsion by Alfredo Stroessner,” Paraguayan Sen. Carlos Filizzola said during the tribute, referring to Paraguay’s former dictator.

After the tribute, Father Oliva told Catholic News Service that his work is “the drop of water that falls on the stone and that ultimately breaks it.”

“I accepted the award as an acknowledgment to the Paraguayan people, on behalf of indigenous peasants and women. It’s for everyone,” he added.

He emphasizes a conciliatory message and said insults on social networks or between politicians separate people more and more as a society. Therefore, he believes necessary to continue working with youth, creating leaders for social union and the common good, and “helping to think.”

Francisco de Paula Oliva became a Jesuit at the age of 18 and, after a brief mission in Japan, he arrived in 1964 to work as a teacher in Paraguay. He became a Paraguayan citizen the following year and a month later was expelled by Stroessner’s dictatorship. The police stopped him, put him on a boat and took him to the other side of the river, to Argentine territory. There he stayed for nine years, assisting Paraguayan and Bolivian migrants in Buenos Aires while he was being watched by the police and the army.

At the invitation of the Anglican Church, he was able to travel to England just when the military intended to kidnap him in the midst of the Argentine dictatorship. Two of his collaborators “disappeared.”

At the time, his Jesuit superior, with whom he had constant conversations, was Father Jorge Mario Bergoglio. Pope Francis and Father Oliva met again in 2015 in Asuncion and embraced as friends.

After Argentina, Father Oliva lived in Ecuador and Nicaragua. There he spent seven years in the Sandinista Revolution, where he said he learned lessons that would later serve him on his return to Spain and Paraguay. He returned to Asuncion in 1994, where he continues to fight with the word.

He has a radio program on Fe y Alegria, writes a weekly column in the national newspaper, Ultima Hora, and posts on Facebook and Twitter. He participates in almost every civic demonstration in Asuncion that supports the most disadvantaged people, the victims of injustice and political persecution or visiting political prisoners. does not carry a banner it is always at the front, accompanied by faithful collaborators, nuns, other priests, indigenous social leaders and peasants