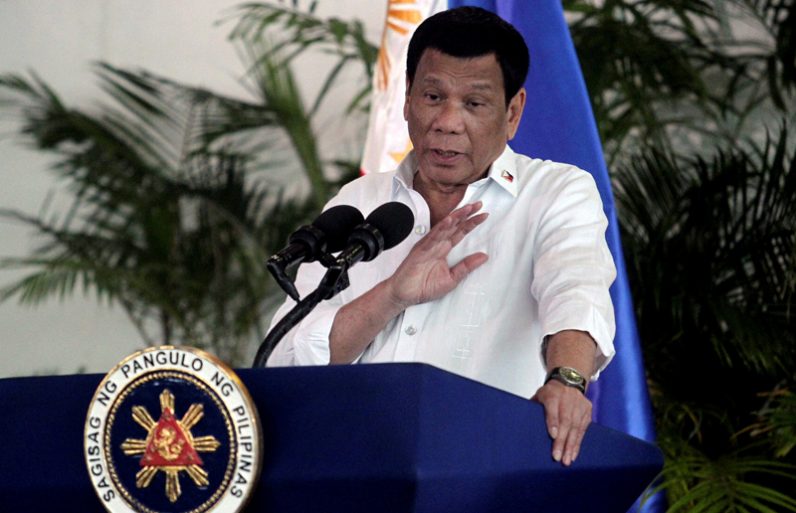 Philippine President Rodrigo Duterte is pictured in a Sept. 8, 2018, photo. Members of the Philippine clergy and human rights groups responded to Duterte after he threatened to arrest all his critics. (CNS photo/Lean Daval Jr., Reuters)

MANILA, Philippines (CNS) — Members of the Philippine clergy and human rights groups responded to President Rodrigo Duterte after he threatened to arrest all of his critics.

At a gathering of prosecutors April 4, the president threatened to declare a “revolutionary war” if his critics “push me to my limit,” reported ucanews.com.

“I will arrest all of you. I will put you together with the criminals, rebels and drug lords,” he told the annual conference of the country’s prosecutors.

“If you make it hard for me, I will declare a revolutionary war until the end of my term,” said Duterte, adding that he was willing to be hanged. “I’m willing to die.”

Bishop Gerardo Alminaza of San Carlos said even without this threat, “killings are rampant.”

“Poor people already live in fear,” said the bishop of the diocese where 14 farmers, accused by the police of being communist rebels, were gunned down March 30.

“We pray (Duterte) won’t do it,” said Bishop Alminaza, adding that a crackdown will only fuel more unrest.

Father Wilfredo Dulay of the Missionary Disciples of Jesus said the “noose is tightening” around Duterte, referring to a series of videos alleging that drug money has been funneled into bank accounts owned by Duterte’s children.

The Dutertes have denied the allegations. Paolo Duterte, the president’s son and a former vice mayor of Davao City, indicated he knew the identity of the accuser.

Redemptorist Brother Ciriaco Santiago Jr., who has been documenting the drug-related killings, said that with the many human rights abuses of the current administration, “what other rights are there left?”

“The church flourishes in every chaos,” he told ucanews.com. “In times when it is persecuted, more take up the challenge to put on the robes of prophets.”

“Today’s challenge is for all of us to band together to oppose this threat of dictatorship,” he said.

“He is feeling the pressure. Endless criticism about Chinese incursions, the killing of drug addicts and farmers, and more recently, the alleged involvement of his family in drug syndicates can push him to the edge,” said the priest.

“They have used up their credible excuses. This is an expression of a desperate man,” he added.

Antonio La Vina, former dean of colleges of law and governance and founder of a coalition of human rights lawyers said, “Duterte is testing the waters again.”

“He is flexing his muscles,” he said, adding that, people will have to hold firm, “otherwise he would feel he could do anything he wants.”