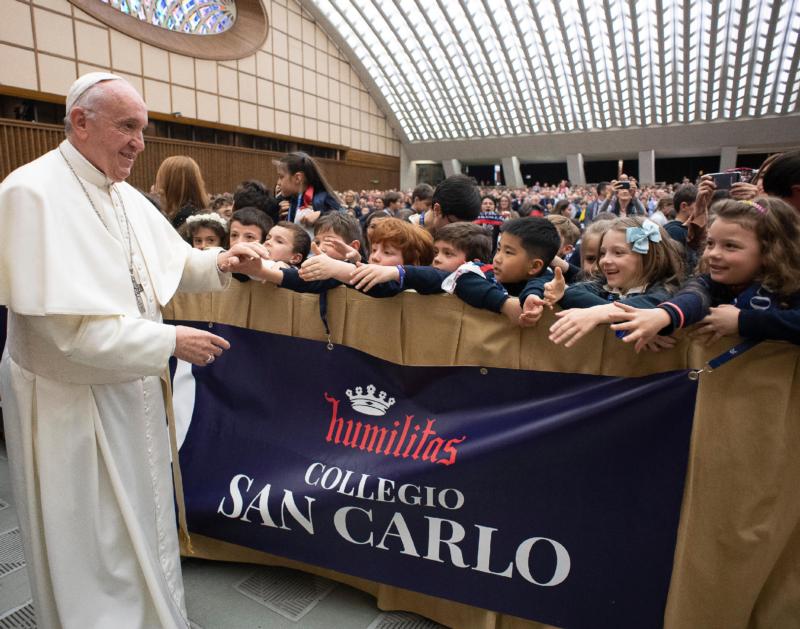 VATICAN CITY (CNS) — God does not play favorites, but human beings do in little ways at school and in big ways with the global economy, Pope Francis told students from Milan’s Istituto San Carlo, a school with students from prekindergarten through high school.

Sometimes God playing favorites seems the only explanation for why some children have everything and some have nothing, the pope said April 6. Asking “why” is essential for coming to the realization that while human suffering is a mystery, often there is a human hand behind the pain.

Adriano Tibaldi, who is in his last year at the school, told the pope that he and others spent a week in the summer working with very poor people in Peru and he asked the pope, “Why does it seem that God shows favoritism?”

Pope Francis pleaded with the students to continue asking that question as they grow and make decisions about their future vocations and work.

“We are the ones who show favoritism,” the pope said. “We are the artisans of the differences” between those who have enough to live and those who don’t.

“Why are there so many hungry people in the world?” the pope asked.

“Someone might say, ‘Oh, pope, I didn’t know you were a communist,’ but, no, this is what Jesus taught us, and when we are there in front of Jesus, he will say to us, ‘Thank you, because I was hungry, and you gave me to eat.’ And to those who with this system kill children and people with hunger, he will say, ‘Go away because I was hungry, and you didn’t even look at me.'”

“This is the protocol on which we will be judged: Matthew 25,” he said. “We are the ones who differentiate.”

And, he said, as for children and other innocent people who are killed or maimed in war, that too is a result of human action, “because we, rich Europe and America, sell the weapons that kill children, that kill the people.”

“There are questions for which we will never have answers,” the pope told the young people. “But asking the questions we will grow and become adults with restless hearts, and we will become aware that we are the ones who discriminate.”

Silvia Perucca, a teacher at the school, asked Pope Francis for advice on strengthening the Christian identity of her students while also preparing them as people of openness and dialogue in an increasingly diverse community.

A fundamental starting point, he answered, is to ensure that the children have “roots” in their Christian faith and in their Italian culture.

“We cannot create a culture of dialogue if we have no identity,” the pope said. “I, with my idea, dialogue with you, with your identity, and we both move forward.”

After lamenting how people are closing their hearts and their borders to migrants, Pope Francis also went after the fearmongers who present migrants as criminals.

In another phrase left out of the official transcript, the pope said people should not pretend that most of the criminals in their country are migrants. “The Mafia wasn’t invented by Nigerians,” he said. “The Mafia is ours, born in Italy.”

The Vatican press office did not offer an explanation for the omissions.

PREVIOUS: People can call Jesus at any moment; he is always there, pope says

NEXT: Pope recognizes virtues of French brother who served in the Caribbean