South Sudan’s leaders will head to Vatican for meetings, retreat 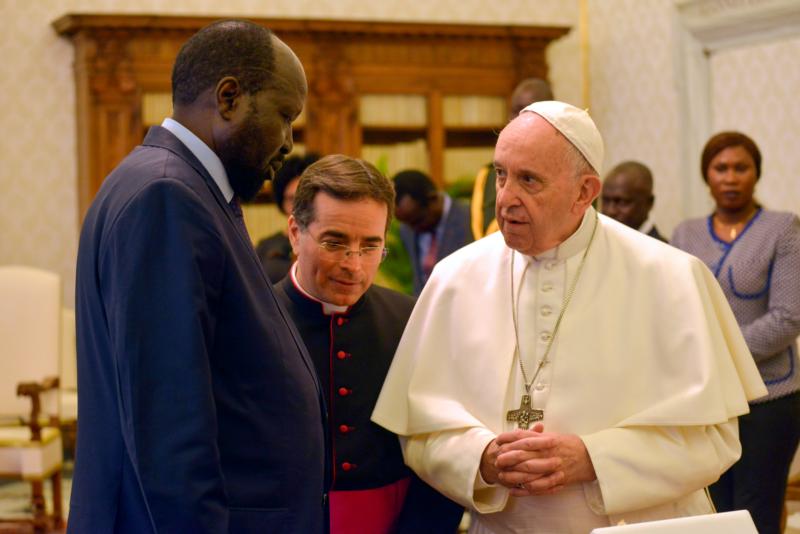 VATICAN CITY (CNS) — South Sudan President Salva Kiir, his vice presidents and other leaders planned to attend “spiritual retreat” together at the Vatican in early April.

Alessandro Gisotti, interim director of the Vatican press office, confirmed April 3 that leaders of South Sudan were scheduled to arrive “next week.”

Pope Francis met with Kiir at the Vatican in a private audience March 16.

A few days after that meeting, South Sudan’s minister of information, Michael Makuei, told reporters that Kiir was expected to return to the Vatican “for a retreat with a select number of officials.”

The president was invited along “with a delegation that he will nominate to go and attend meetings or what is called a ‘retreat’ in the Vatican from the 11th to 12th of April … in order to go and have meetings with the concerned bodies and the institutions,” Makuei said March 19.

Catholic Information Service for Africa, which is run by the Consolata Missionaries’ media center, reported April 2 that South Sudan’s opposition leader, Riek Machar, accepted an invitation by Pope Francis to attend “a meeting” at the Vatican with Kiir.

That meeting, reportedly expected April 9-10, would focus on building confidence in the September 2018 peace agreement, which was designed to end the nation’s five-year civil war and proposed a transitional government of national unity, according to Manawa Peter Gatkuoth, the deputy spokesman for Sudan People’s Liberation Movement-in-Opposition.

Cardinal Pietro Parolin, Vatican secretary of state, told reporters April 3 that the retreat “will be a moment of spirituality and, above all, an invitation for politicians as well as all the authorities to realize the responsibility they have” to promote peace.

He also confirmed that Pope Francis will “participate at the end” of the retreat.

Regarding a possible papal visit to South Sudan, Cardinal Parolin said that while “the situation has improved a little,” he “cannot say anything about a (possible) journey of the Holy Father which is in his interest, his wish, to go there.”

The Vatican is looking at the possibility, he said, with “cautious optimism.”

Meanwhile, the Catholic bishops of South Sudan have said the country’s current peace deal is fatally flawed and a “new model” was needed for peace by addressing the root causes of conflicts.

The peace deal that the main warring parties signed in 2018 decreased the level of open conflict, but “all parties are involved either in active fighting or preparations for war,” the bishops said in a statement after a February meeting in the capital, Juba.

Human rights abuses, including murder, rape and looting, continue with impunity, they said.

While the civil war killed almost 400,000 people and displaced millions, more than 1.5 million people in South Sudan are on the brink of starvation and more than 6 million people, half the population, face extreme hunger, according to the United Nations.

The economic situation “concerns us greatly,” the bishops said, noting that “peace should provide people with their basic needs and services, and this is not happening.”

Many people cannot return home because their homes have been destroyed or occupied, and people are still fleeing violence, the bishops said.

To improve the situation, they said Kiir “should constructively engage all stakeholders” to ensure that each signatory to the peace deal does what it agreed to do, the state of emergency should be lifted to ensure freedom of speech and other democratic rights, and all political detainees and prisoners of war must be released.

The Catholic Church “will continue to use its preaching, teaching and pastoral networks to create an atmosphere conducive to peace and reconciliation,” they said.

PREVIOUS: People should not fear difference, but division, pope says at audience

NEXT: Pope to celebrate Holy Thursday with prisoners