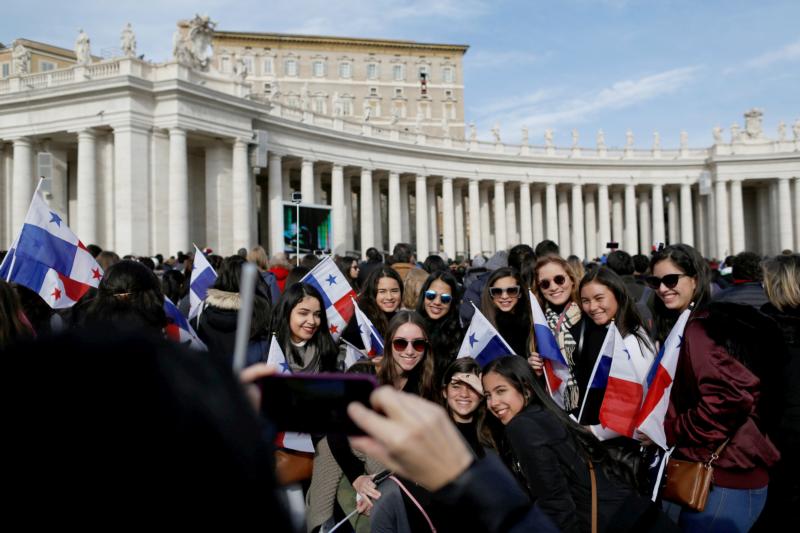 Students from Panama pose for a photo as Pope Francis leads the Angelus Jan. 22 in St. Peter’s Square at the Vatican. (CNS photo/Tony Gentile, Reuters)

VATICAN CITY (CNS) — Jesus doesn’t hurl stones at sinners but instead shows them that his forgiveness always opens a path forward to a joyful future, Pope Francis said.

Like the scribes and Pharisees who laid down the stones they were going to throw at a woman caught in adultery, Christians are called during the Lenten season “to recognize that we are sinners and to ask God for forgiveness,” the pope said April 7 during his Sunday Angelus address.

“Forgiveness, in turn, while reconciling us and giving us peace, helps us start again with a renewed history. Every true conversion is directed toward a new future, to a new life, a beautiful life, a life free from sin, a generous life,” he said.

The pope focused his talk on the Sunday Gospel reading, in which Jesus tells those ready to condemn a woman to death to cast the first stone if they were without sin.

While those men wanted to bottleneck Jesus “in their perspective of judgment and condemnation,” he said, Christ makes it clear that he came into the world to save sinners and offer them a new life.

“This scene invites each one of us to realize that we are sinners and to let the stones of denigration and condemnation, the stones of gossiping that we sometimes want to hurl at others, fall from our hands,” the pope said. “When we speak ill of others, we throw stones; we are like those men.”

Jesus was the only one without sin, but he does not throw a stone because God doesn’t want sinners to die but “to convert and to live,” Pope Francis said.

In their own lives, he added, Christians should also bear witness to the merciful love of God, “who, in Jesus, forgives us and makes our existence new, always offering us new possibilities.”

“Jesus opens before (the woman) a new way created by mercy, a way that requires her commitment to not sin anymore,” the pope said. “It is an invitation that applies to each one of us: Jesus, when he forgives us, always opens up a new way for us to move forward.”

PREVIOUS: Chinese bishop who stepped aside unsure he can concelebrate chrism Mass

NEXT: People can call Jesus at any moment; he is always there, pope says