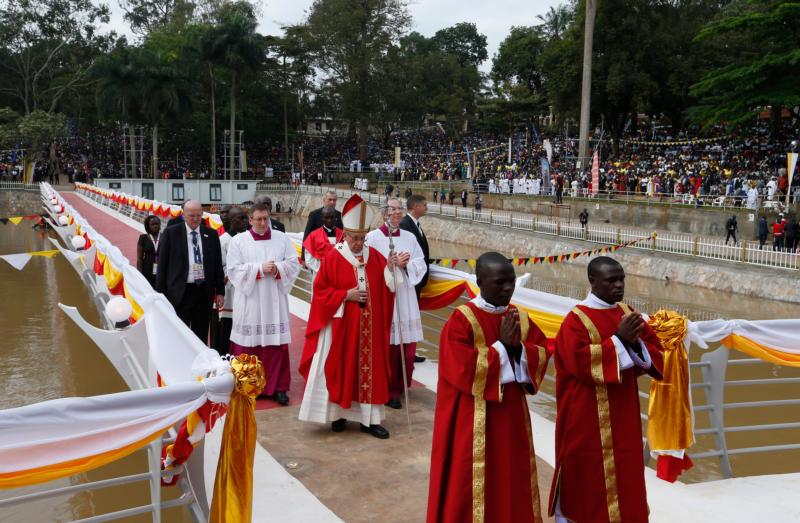 Pope Francis arrives in procession to celebrate Mass for the martyrs of Uganda near the Catholic shrine at Namugongo in Kampala, Uganda, Nov. 28, 2015. Authorities in Uganda have banned the sale of alcohol within 200 meters of the shrine. (CNS photo/Paul Haring)

KAMPALA, Uganda (CNS) — Authorities in Uganda have banned the sale of alcohol within 200 meters (220 yards) of the Uganda Martyrs Catholic Shrine outside Kampala.

John Mukasa, a local government leader in Namugongo, where the Catholic shrine is located, said the decision was made after the discovery that many people who celebrate the feast of the Uganda Martyrs each June 3 ended up spending much of their time in bars and at the pork kiosks surrounding the shrine.

The ban is year-round; bars more than 200 meters away can continue to serve alcohol.

“Martyrs Day is meant to be a day for believers to pray in honor of Ugandan martyrs,” Mukasa said. “But some people have been coming here to drink alcohol and eat pork without even going where the Mass is conducted. That has made us, together with the Catholic Church, ban sales of alcohol in the area surrounding the shrine.”

He said that sex workers have also been taking advantages of the bars to pick up men, especially in the night before the feast.

Father Simon Olowo, who is among those organizing this year’s Martyrs Day celebrations, said the decision was made so people can focus on prayer, not getting drunk.

”It is a special day for our martyrs and not a day of drinking alcohol,” said Father Olowo.

The Ugandan Martyrs are a group of Anglican and Catholic converts killed between 1885 and 1887. An Anglican shrine to the martyrs is just over a mile away from the Catholic shrine.

NEXT: Pakistani prime minister tells BBC Asia Bibi has not left for Canada