‘Wizard of Oz’ shows its actors are ‘more than their disabilities’

Students of Archbishop Ryan Academy for the Deaf and St. Lucy Day School for Children with Visual Impairments performed “The Wizard of Oz” at Holy Innocents Parish in Philadelphia, April 12. In the innovative production, the leading characters were each portrayed by two actors, one visually and the other hearing-impaired. (Photo by Gina Christian)

Students from Archbishop Ryan Academy for the Deaf and St. Lucy Day School for Children with Visual Impairments joined forces to stage an innovative production of “The Wizard of Oz” at Holy Innocents Parish Hall in Philadelphia.

At the April 13 show, the main characters were simultaneously portrayed by two students, one deaf and one visually impaired. For each role, one student signed the dialogue and songs, while the other vocalized the lines.

The interpretation of the theater classic was “definitely a team effort,” said Maria Ceferatti, the schools’ adaptive music teacher.

Ceferatti is also the music director of Acting Without Boundaries (AWB), which provides acting and theatrical opportunities for young people with physical disabilities. Since several Archbishop Ryan and St. Lucy students perform with AWB, Ceferatti didn’t have to search very far when casting the show.

In addition, she received “a lot of help from the Archbishop Ryan ASL (American Sign Language) teachers” throughout the production.

“I gave them the script ahead of time, and they did what in the deaf world is called ‘glossing,’” she said. “They interpreted the script and put it into ASL.”

The instructors also attended every rehearsal, making sure the hearing-impaired students could read stage cues and recreate lyrics and dialogue in ASL.

Ceferatti hopes that the performance, which was enjoyed by some 100 attendees, will encourage the students to “feel the theater bug.”

The experience was also designed to build the students’ confidence, and to remind the world that “they’re more than their disabilities,” said Sister Lisa L. Lettiere, I.H.M. 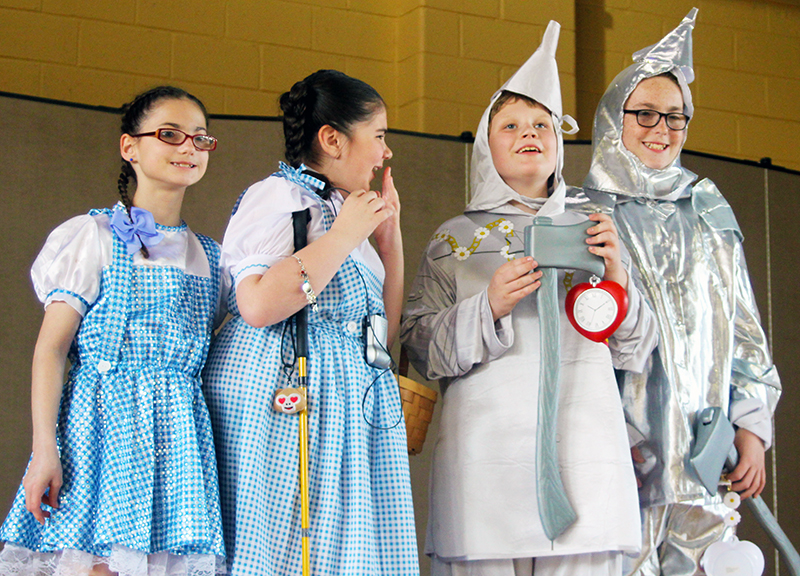 Students from Archbishop Ryan Academy for the Deaf and St. Lucy Day School for Children with Visual Impairments performed “The Wizard of Oz” at Holy Innocents Parish in Philadelphia, April 12. For each of the show’s leading characters, students from both schools paired up to both sing and sign the roles . (Gina Christian)

Sister Lisa serves as principal of the two schools, which are located on the campus of Holy Innocents Parish. Together with Our Lady of Confidence School and St. Katherine Day School, Archbishop Ryan and St. Lucy comprise a total of four archdiocesan Schools of Special Education.

The April 13 performance took on an even deeper meaning, Sister Lisa added, since it was dedicated to a fellow student who had passed away in August 2018.

“Her very favorite song was ‘Somewhere Over the Rainbow,’ and we had a chance to do this play in her honor,” said Sister Lisa. “She was supposed to be singing it today, but instead she was celebrating with us from heaven.”

Trish DiGiuseppe, whose daughter Shannon is set to graduate from St. Lucy this spring, was delighted to see her daughter in the spotlight.

“She loves acting, and the show really helped her to explore the different sides of her personality,” said DiGiuseppe.

The beloved narrative of the show, based on L. Frank Baum’s book and its classic 1939 film adaptation, spoke directly to the actors, said Ceferatti.

“They’re on a journey just like Dorothy, to discover themselves, to have a heart, to make sure they’re empathetic to people,” she said, adding that her students are also “definitely on the yellow brick road to many more shows.”

NEXT: Rally on Friday will protest recent abortion-clinic videos