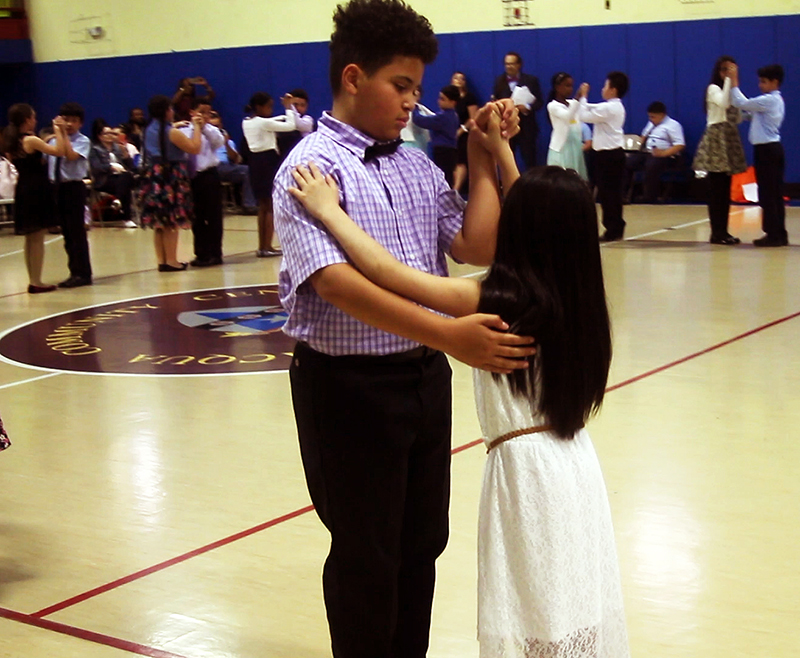 Traditional activities such as chess and ballroom dancing are reaching a new generation of students at Visitation B.V.M. School in the Kensington section of Philadelphia.

As part of their curriculum, fifth graders spend 10 weeks each year learning how to tango, meringue, foxtrot and waltz. The lessons instill teamwork and respect in youth while helping them to mature, according to instructor Mark McLeod.

“Some recent studies have shown improvement in the social-emotional spectrum of children who study ballroom dance,” said McLeod, who teaches for Dancing Classrooms, a New York City-based educational nonprofit.

Founded in 1994 by award-winning dancer Pierre Dulaine, the organization provides ballroom dancing instruction to elementary and middle schools throughout the United States, Canada, Switzerland, Israel and Jordan. Dulaine’s mission to make dance accessible to youth was the subject of the hit documentary “Mad Hot Ballroom” and the feature film “Take the Lead,” in which he was portrayed by actor Antonio Banderas.

Funding from a grant enables Visitation to retain McLeod, now in his seventh year of adjunct teaching at the school.

“We ask for him to be assigned here; he’s a really good instructor and the kids do well with him,” said Ed Coleman, who as principal oversees some 430 students from ages 3 to 14.

Fifth-grade teacher Rebecca Mauro noted that the lessons take place at a critical point in the students’ development.

“Fifth grade is that year where kids make the jump from being children to being teenagers,” said Mauro, who helps to moderate McLeod’s lessons. “Ballroom dancing teaches them etiquette and maturity, it gives them a lot more focus, and overall it gives them a boost of confidence they need to do well in life.”

“Initially, she was very nervous and did not want to do this at all,” said Reilly. “But the dancing just gets them more comfortable with the whole art of it. It’s very good exercise, too.” 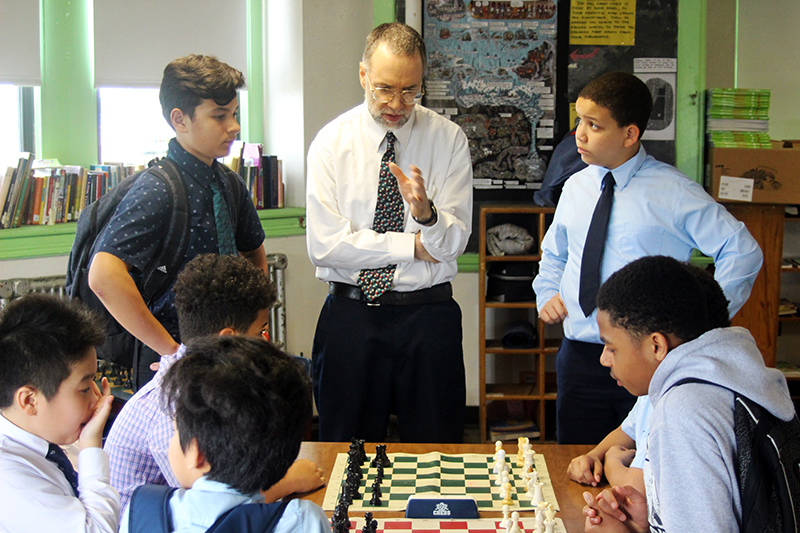 James Roache, a fifth grade teacher at Visitation B.V.M. Parish School in Philadelphia, instructs members during a meeting of the chess club he founded. Now in its 23rd year, the club is a popular afterschool activity at the school. (Gina Christian)

Keira said that she plans to continue dancing, and McLeod observed that many students have even taken to practicing during recess.

“That’s pretty precious time, so if you’re out there practicing a song to remember the moves, that’s good,” he said.

Students at Visitation have embraced the game of chess with similar enthusiasm.

“You get to think a lot, and it’s fun,” said fifth grader Anthony Pham. “Although you get mad when you lose.”

Pham joins some 30 to 40 kids each week in the classroom of fifth-grade teacher James Roache, who started a chess club at the school in 1996, buying several sets of boards and pieces with his own money.

Roache was inspired by world chess champion (and now human rights activist) Garry Kasparov, whose matches against an IBM supercomputer that year helped to bring international attention to both artificial intelligence and chess.

“I was riding the train home and reading about Kasparov in the newspaper, and I just became fascinated with it,” said Roache, adding that he only knew the basics of the game at that point.

After consulting a few books, he improved his skills and founded the chess club, which was an immediate hit with the students.

“The next thing you know, I’ve got 60 kids in my room playing chess,” said Roache. “And it wasn’t a slow build.  They were on me like flies.”

The longtime teacher sensed an opportunity to nurture the youths’ interpersonal skills, as well as their intellectual abilities.

“I decided to make it a social thing as well,” he said. “I don’t want to force them to play a stodgy game, so I let them eat, talk and have a good time, as long as they’re mostly playing chess.”

Over the years, Roache also sought out competition opportunities for his students. Until about three years ago, the club belonged to a local league, “and we won every single match we ever played,” said Roache.

Since that league disbanded, Roache’s club has been limited to scrimmaging against public school clubs and participating in occasional weekend tournaments sponsored by Drexel University and the Philadelphia Eagles.

Even without a tournament schedule, Roache offers players an incentive: an in-house trophy that lists the names of the school’s annual champions.

Several of his students continue with the club even after they’ve completed fifth grade, and one alumnus started a club at his college.

Chess in the classroom has popularly been thought to develop cognitive skills, although some studies have questioned to what extent. Roache nevertheless feels that the game benefits his players.

“It makes them think ahead, focus and concentrate,” said Roache. “And it helps to hone their analytical skills.”

“Chess is calming, unlike video games, where you can get enraged quickly,” she said.

“You learn from your mistakes when you lose, and you learn more strategic ways to beat your opponent,” Aponte said.

Above all, “old school” activities like chess and ballroom dancing inspire students to take on new challenges.

“It’s never too late to learn,” said fifth grader Ricardo Santos. “Follow your dreams, and just do whatever you want in life, because you only have one.”

NEXT: Philadelphia cops aided by faith in line of duty