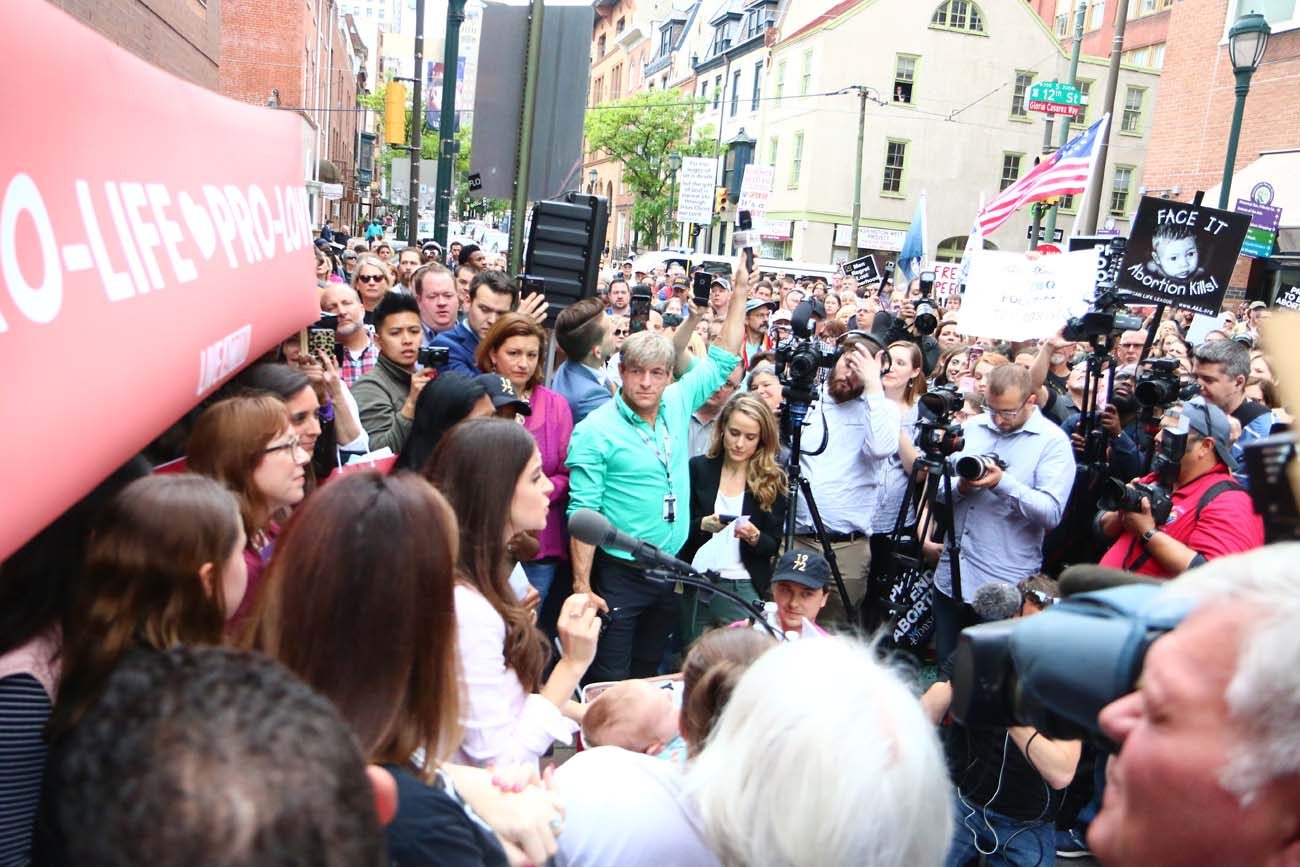 Lila Rose, the founder of the pro-life group Live Action that sponsored the "Pro-Life Rally Against Bullying" May 10 in Philadelphia, speaks to a crowd on the street in front of a Planned Parenthood clinic in the city. The rally was held in response to the verbal harassment of peaceful sidewalk witnesses by Pennsylvania state Rep. Brian Sims, which came to light in recent videos he posted on social media. (Photo by Sarah Webb)

More than 1,000 people gathered May 10 for a public demonstration against recent social media videos that depicted a Pennsylvania lawmaker berating pro-life witnesses.

Sims called for donations to the abortion center while offering money to viewers who could provide the identities and addresses of the witnesses.

Shortly after the videos emerged on social media, the national organization Live Action organized the rally. It featured representatives from a number of local and national groups, including the Pro-Life Union of Greater Philadelphia, the Pennsylvania Family Council, 40 Days for Life, Students for Life, Sidewalk Advocates for Life, Sidewalk Servants and the Susan B. Anthony List.

Lila Rose, founder and president of Live Action, served as the gathering’s moderator. While calling for Sims’ resignation, Rose noted in her opening remarks that the event had been organized “for a much bigger reason … (to) stand for the dignity of human life,” a point emphasized throughout the speakers’ presentations.

(See a photo gallery of scenes from the rally here.)

Rose said “over 900 babies are killed every day at Planned Parenthood facilities across the U.S., and 2,600 across the nation at abortion clinics” on a daily basis in total.

Author and speaker Matt Walsh, who had called for the rally through a series of Twitter posts, said “abortion is not a reproductive issue, but a parenting decision,” since “by the time the abortion happens, reproduction has already occurred.”

Walsh said he hoped the rally would become a regular event.

Ashley Garecht, one of the women who had been confronted in Sims’ videos, drew cheers as she commended the longtime efforts of pro-life demonstrators and volunteers, noting they “are standing on the side of the angels.”

Garecht also observed that the demonstration took place just blocks from the one-time home of James Madison, a primary author of the U.S. Constitution, which enshrines “a self-evident, inalienable right to life,” she said.

Several speakers directly addressed Sims’ claims that the pro-life advocates he had filmed were racist.

Richara Krajewski of the Pro-Life Union of Greater Philadelphia said she stood before the crowd “as a pro-life black woman.”

Noting that “it’s so popular now to call out racism,” Krajewski wished to clarify that application of the term, particularly “in the context of pro-abortion politics.”

“Real racism,” she said, “is co-opting the language of liberation to advocate for the destruction of the lives of the most vulnerable. Real racism is a so-called white ally telling black and brown women that they need to choose between their dreams and their babies.” 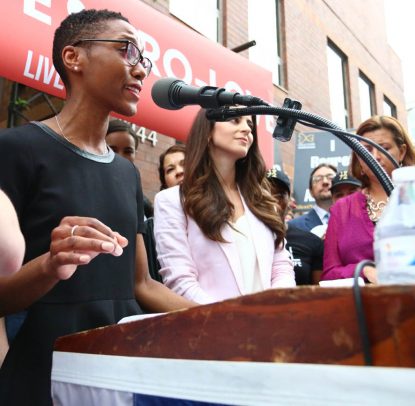 Richara Krajewski, a board member of the Pro-Life Union of Greater Philadelphia advocacy group, speaks at the May 10 rally in center city to protest the verbal harassment of peaceful sidewalk witnesses by state Rep. Brian Sims, which came to light in recent videos he posted on social media.

Toni McFadden, founder of Relationships Matter, described her own experience as an African-American teenager who had turned to Planned Parenthood for an abortion induced through an abortifacient prescription.

Through speaking engagements, McFadden now shares her insights on post-abortion healing and spiritual development “so that no more babies need to die because of convenience.”

Abby Johnson, author of the book “Unplanned” and a nationally recognized pro-life advocate, met with an enthusiastic response as she announced she is now 37 weeks pregnant.

A former Planned Parenthood employee, Johnson took the organization to task for “covering up statutory rape of minors, not sterilizing instruments that are being used woman to woman” and repeatedly failing health inspections.

Earlier in the week, Archbishop Charles J. Chaput in a statement had encouraged people to attend the rally and “meet the hateful actions of Representative Sims with the love of Christ,” while inviting all to “fervently pray for respect for life from conception to natural death.”

Philadelphia Auxiliary Bishop John J. McIntyre delivered a final blessing at the gathering, which had been marked throughout by the prayers of the attendees. Many of them carried rosary beads, while a few held crucifixes aloft in the crowd.

Some 20 patient escorts from Planned Parenthood, wearing bright yellow and pink vests, lined the sidewalk during the rally; they declined to offer comment.

Margaret Kuhar, a Philadelphia resident who has just finished her freshman year at the University of Mary in North Dakota, said the event was remarkable for its “shoulder-to-shoulder turnout” and the rapid manner in which it had been organized.

She has attended the annual March for Life in Washington, D.C. more than 15 times with her family, and said she has seen “a big turnaround” in the attitude of younger generations to abortion, with more young adults less willing to seek it out.

Stacey McMahon, a tourist to Philadelphia from Cape Coral, Florida, attended the rally by chance. She stood against the exterior wall of the Planned Parenthood facility throughout the event as she silently “prayed to the Sacred Heart of Jesus,” she said, for both attendees and the abortion facility staff.

“I prayed for a young lady who had been shielded by escorts to enter Planned Parenthood during the rally,” said McMahon, a Catholic. “I was being the hands and feet of Christ, not making myself known as any type of Christian. That’s what Christ asks you to do, to stand silently for those who need him, the vulnerable.”

NEXT: Montco moms got a head start on their special day