Bishop urges solidarity with maritime workers and their families 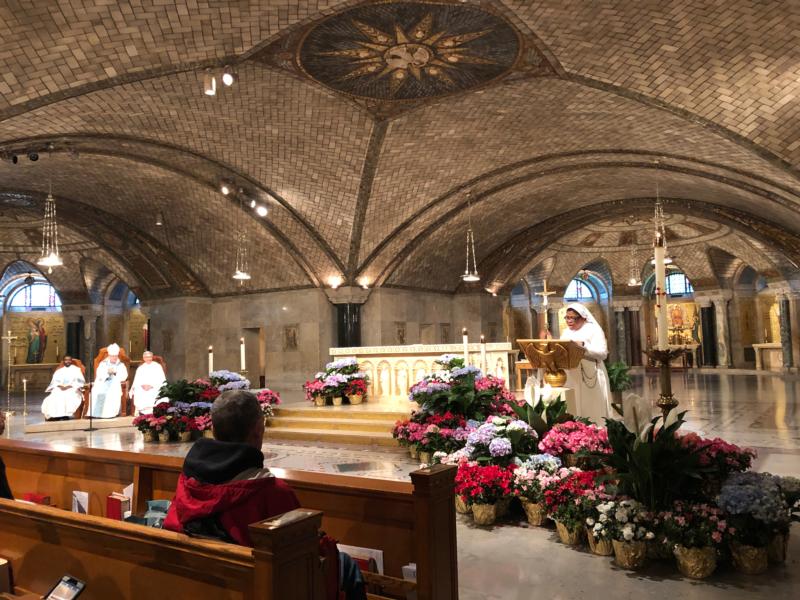 Sister Joanna Okereke, right, national director of the Apostleship of the Sea ministry, offered thanks to those who turned out to pray for maritime workers and their families May 18, 2019, in the crypt church at the Basilica of the National Shrine of the Immaculate Conception in Washington for the annual Mass to mark the National Day of Prayer and Remembrance for Mariners and People of the Sea. Bishop Brendan J. Cahill of Victoria, Texas, who is bishop promoter of the Apostleship of the Sea, celebrated the Mass and praised the the work and contributions of maritime workers and their families. (CNS photo/Rhina Guidos)

WASHINGTON (CNS) — During a May 18 homily celebrating the work and contributions of maritime workers, the bishop promoter of the Apostleship of the Sea ministry urged Catholics to pray for the largely unseen but important work of those who toil on the seas and for the hardships their families endure.

During the annual Mass to mark the National Day of Prayer and Remembrance for Mariners and People of the Sea, Bishop Brendan J. Cahill of Victoria, Texas, called attention to not only to the work of maritime workers but also to the sacrifice of their families. Most people “really have no idea” of the physical work involved for those who work on the seas, Bishop Cahill said.

“The church has always been involved with us,” said Angela Sanfilipo, executive director of the Massachusetts Fishermen’s Partnership and wife of a fisherman attending the maritime Mass, celebrated in the crypt church of the Basilica of the National Shrine of the Immaculate Conception in Washington.

Though her husband recently retired, she said she has seen firsthand the hardships fishing families go through, from child-rearing to affording education for children and even health services — not to mention the worries families have as they watch their loves ones go to work in the seas and the dangers that presents.

This year, National Maritime Day, which took place May 22, honored women working in the maritime community.

After the liturgy, Kevin Tokarski, associate administrator for Strategic Sealift of the Maritime Administration, which is within the U.S. Department of Transportation, thanked the U.S. Catholic bishops for holding the Mass each year, and thanked the Apostleship of the Sea ministry for its “daily support to the women and men who pursue careers” in the sea and highlighted the contributions women in the industry.

He said the events at the Department of Transportation on Maritime Day honored special guest Catherine “Kay” Morrison, “a 95-year-old who once help build ships during her job as a welder at Kaiser Shipyard in Richmond, California, during World War II. The program also included speaker Jennifer Boykin, the first female president of Newport News Shipbuilding and a graduate of the U.S. Merchant Marine Academy.

Sister Joanna Okereke, national director of the Apostleship of the Sea, said that recognizing the work of people of the sea “is very important for the church,” which is why “every year,” she said, “the church remembers those who served as merchant mariners, seafarers, fishers, their families, port personnel and all who work or travel on the high seas.”

“Bishop Cahill said, ‘We are filled with the joy of the spirit,'” she continued. “I believe it is the same spirit that leads us to welcome and serve others, especially the seafarers, fisher men and women, their families, and all who work or travel on the seas.”

Sister Okereke, a member of the Congregation of the Handmaids of the Holy Child Jesus, also gave an invocation at the national events for Maritime Day sponsored by the Transportation Department, which included a wreath-laying ceremony and the ringing of eight bells for mariners.