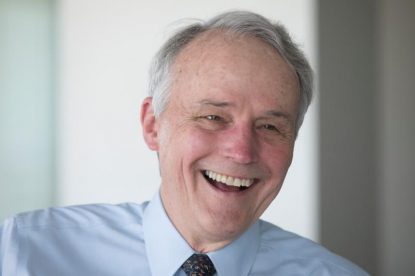 David Beckmann, president of Bread for the World, smiles during an interview with Catholic News Service in Washington May 2, 2019. Beckmann plans to step down as president in the near future. (CNS photo/Bob Roller)

WASHINGTON (CNS) — The Rev. David Beckmann is preparing to step aside as president of the Christian citizens anti-hunger lobby Bread for the World after 27 years. In fact, by the time a successor is chosen, it will be 28.

Despite having his hand on the till since 1991, “I love it more and more,” said Rev. Beckmann, an ordained Lutheran minister. “I’ve grown in faith because of the work,” he added during a May 2 interview at Bread for the World’s offices in Washington. “This is a really unique perspective on the world,” he said, waving his right hand in the general direction of the Capitol, “and watch our politics unfold, always with an eye on what’s happening to ‘the least of these.'”

Rev. Beckmann has a soft spot in his heart for Catholics. They make up about half the membership of Bread for the World, and he considers Pope Francis’ encyclical “The Joy of the Gospel” “one of my favorite books — and it’s not even a book!” Moreover, at Bread for the World “the focus on hunger is embedded in Christian social justice teaching, which is probably best articulated by Catholic social justice teaching.”

That focus is intentionally split between hunger and nutrition needs requiring immediate action, and structural issues that plunge entire populations into poverty and hunger. On the latter front, Rev. Beckmann had much good news to trumpet.

“The world has made tremendous progress in its hunger, poverty and disease. Nobody expected that, but it’s true,” he said. “A lot of people, me included, have come to conclude that we should be giving thanks to God for this. Hundreds of millions of people have escaped from extreme poverty. This is like an Exodus in our own time. It really is like an Exodus. It is a great liberation, and we should give God glory for it.”

Rev. Beckmann never singled out Bread for the World — often simply called “Bread” — as the sole factor for any campaign’s success. One example: “Bread for the World, working with the churches and others, has played a big role in dramatically increasing international assistance since about 2000. Assistance focused on poor people in the world from the U.S. government has more than tripled. And it’s bipartisan. It’s wonderful. Partly, church people have helped to build heroes on both sides of the aisle.”

When Bread for the World signed on for the Jubilee 2000 campaign to forgive the international debt of the world’s poorest nations, “we thought, ‘This is a long way from hunger,'” Rev. Beckmann said. “When we first started talking about debt relief, people thought we were talking about their Mastercard debt. And it’s a complicated subject: How are you going to talk about reducing debut in a way that’s not just helping out corrupt governments but in a way that announcing jubilee to the people?”

But Bread for the World and its allies kept at it, and the reward was significant. “It got a whole generation of African kids in the schools,” Rev. Beckmann said. “Dramatic expansion of schools that was funded by debt relief because the payments those countries didn’t have to pay to industrialized-country debt, they had to use; part of the deal was they had to do that (redirect forgiven debt) for poverty-reducing investments. So debt relief, in retrospect, is obviously helped to reduce hunger, helped a lot of African countries get on a path to rapid growth and dramatic reductions in poverty.”

Domestically for Bread for the World, the biggest victories seem to be the avoidance of losses. “Our country made a lot of progress against poverty in the Sixties and early Seventies, but really we haven’t made much progress since then. We’ve just held our own, but we’ve held our own partly because Bread and other church groups with us have resisted huge political pressures to cut programs that assist people in poverty,” Rev. Beckmann said.

He cited John Carr, then a domestic policy official for the U.S. bishops, for helping prevent some of the biggest potential losses.

“It was his idea to pull together the Circle of Protection in 2011,” Rev. Beckmann said. “That’s when the big budget controversies started in Congress. Every budget that’s passed in either house of Congress since then has proposed to cut something like $2 trillion from low-income programs. And the churches rallied around in 2011 and held together ever since. So conservative churches, liberal, black, white, Protestant, Catholic have together said to Congress: ‘Don’t cut programs that are focused on poor people. Make them better. We’ll help you make them better.'”

That episode was one reason Rev. Beckmann went back to notes he made prior to the CNS interview to declare: “I love Pope Francis, I love the Catholic Church, I love women religious, I love Catholic social teaching, and I love John Carr.”

During Rev. Beckmann’s tenure, Bread for the World has grown. Its current office is its fourth since he took the reins from the Rev. Arthur Simon, the founder. “And in terms of numbers, we have about 800,000 take action with Bread for the World now, and we’re in touch with about 20 million people” thanks to digital communications, he said.

As for his future, while waiting for the board to choose a successor, he said part of the plan is to help guide a smooth transition between him and the next president. When he departs, he’ll also give up the presidency of the Alliance to End Hunger, a companion organization that includes Bread for the World’s counterparts in Judaism and Islam as well as corporations, hospitals and universities. “It’s a secular world,” Rev. Beckmann said. “If we’re going to end hunger, it can’t be just the churches.”

Or maybe he won’t depart after all. “May be I’ll work at Bread for the World in some capacity,” he chuckled. “I’ll have to wait and see what the new boss says.” But wherever and however, Rev. Beckmann added, “I’ll keep working on hunger, poverty, politics, faith.”